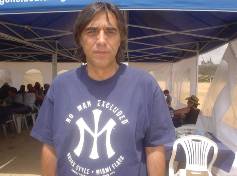 Caught having cups of coffee after a frugal meal, and after one of the most torrid mornings in the filming of "Alatriste", it's 40 degrees in the plains of Uclés, Cuenca, Agustín Díaz Yanes (Madrid 1950) receives us with his usual cordiality while Captain Alatriste heads, in long strides, towards his trailer in order to drink maté. Having respect for the natural confidentiality demanded by the production company, we ask Yanes about the progress of a film that, these days, is in the final stages of its shooting.

Iñigo Marcos, executive producer, told us that luck was with you for all of the shooting.

Yes indeed, everything went like clockwork and what Iñigo says is true: whenever we needed wind we had it, and whenever we needed it not to rain that's what happened. We have had the elements on our side, therefore I can say the day and time of the shooting went by the minute.

It has always been said that Díaz Yanes is a great characters director, a director of intimate environments, and this is a film that also has big location sequences, battles and crowds in motion. How has this experience turned out to be?

Action scenes were the most difficult thing, but we have done it despite it turning out to be difficult. I've been lucky because I've surrounded myself with a first-rate crew of technicians and genuine stuntmen for the action and battle scenes, so I just let myself be advised on that aspect of crowds in motion.

Since Alatriste has his roots in the Curueño, why hasn't it been possible to shoot any sequence in León?

What has happened is that when Viggo started to travel in León we already had the locations. When he thought that Alatriste was born in that land it wasn't possible to insert more shots, otherwise, we would have been delighted to shoot over there, because Quevedo was put in prison at San Marcos, same as here in Uclés, and it would have been a good reason to shoot in that city.

Would there be any chance of the film being premiered next year in León?

Of course, neither Viggo nor I have any problem in that respect. We both would be pleased to have the premiere of "Alatriste" in León. I know that land very well, because I have gone to launch some of my films with Carmelo Gómez (tr. note: famous actor from León), a good friend of mine. As for Viggo, I know he's longing for it, and wherever Viggo goes I go. We only have to wait for what the production company says (curiously, some moments before, Iñigo Marcos, executive producer of the film, had told this newspaper that he didn't see any problem with such an event)

As far as I can see, for the film Viggo has been something more than a famous international actor that has given the shooting prestige.

Of course, he is not just a cultured actor that speaks Spanish perfectly and knows Spanish history inside out, this time (XVII c.) in particular, but he is also so integrated that for me he is another Spanish actor. I'm used to working with Mexican actors and I have never distinguished between one and the other.

This is Agustín Díaz Yanes' 3rd film as a director, a cinematographic trajectory that goes back to 1995, when he made his debut with a hard and controversial film as "Nobody will speak of us when we're dead" was, a breakaway film that was the preamble of his next work behind the camera, "No news from God". In this 3rd excursion he completely changes the subject and goes deeply into the Spain of the XVII century, swept by the wars against Flanders and weakened by the intrigues of some people who contributed a different image of Spain to the one of the Black Legend cliché.

A cultured, thoughtful director and, above all, a tireless worker, Díaz Yanes is interwoven with the camera as if he was part of the camera itself. He doesn't leave aspects to be considered, however difficult or tough they are, and he spends more than 10 hours a day under a burning sun. "Alatriste" -- he says-- "is my big adventure, I've never shot with such a high budget and so many extras, therefore this shooting is a new challenge for me. What I intend, above all, is that the film moves and motivates people. I leave the rest to the critics".