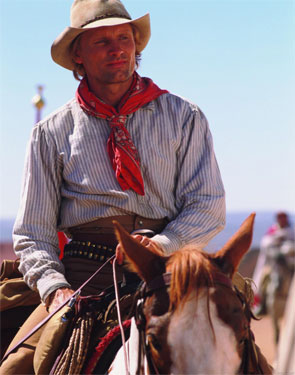 
Viggo Mortensen is standing in an army surplus jacket, faded jeans and stocking feet, sipping his maté tea ('it's a South American herbal tea,' he says) from a small wooden cup and looking somewhat mischievously onto the rooftop outside his suite at the San Francisco Ritz-Carlton through the narrow gap in a half-open window.

As I'm sure Anne the publicist could now attest, with Viggo Mortensen, you never know what's going to happen.
Top of this page
Last edited: 27 May 2005 18:14:27
© SPLICEDwire.