Viggo-Works > Articles > Introductions > Intro to It Feeds Itself 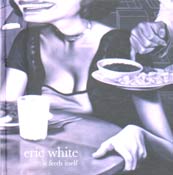 
It Feeds Itself (Last Gasp, 2003) is a collection of Eric White's paintings, described by the publisher as a 'hyper-intensive, distortedly lucid' exploration of 'the shifting boundaries between beauty and horror'. Works from four shows, Pink Bits, Contrived Works, Sci-Fi Western and 1000 Clowns, as well as miscellaneous works are included in this comprehensive collection spanning Eric White's career. Viggo Mortensen's contribution to this volume is in the form of a letter to the artist.