How Viggo Mortensen learned to be captain of 6 kids onscreen 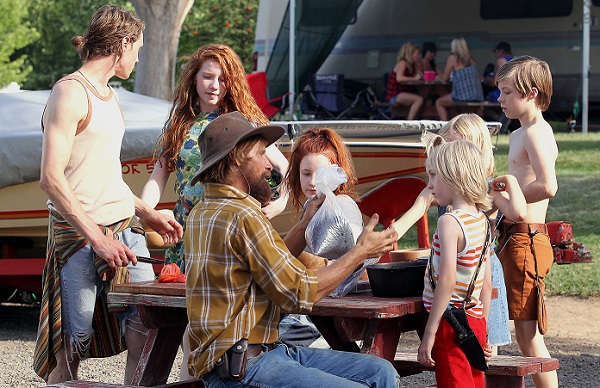 © Bleecker Street.
Viggo Mortensen, whose new film, Captain Fantastic, was shot partly in Washington state, is in his fourth decade of moviemaking. He found he had plenty to learn from the young cast playing his six children in Fantastic.

"W.C. Fields said don't work with kids or animals, I guess because they'll upstage you or drive you crazy," said Viggo Mortensen, with a soft chuckle. "But I've always enjoyed it."

Last time Mortensen came to Seattle, he was doing press for Hidalgo, a 2004 Western in which he co-starred with an American Paint horse named TJ. (They got along so well that the actor bought TJ shortly after the film's completion; the horse now lives happily on a friend's ranch in California.) He returned last month to the Seattle International Film Festival with Captain Fantastic — a film in which he plays Ben, a widowed father of six children living off the grid in rural Washington. (The film opens July 15.)

"I was endlessly fascinated by him," said Mortensen of Ben, whose children are home-schooled, trained in survival skills and encouraged to speak their minds. The character, equal parts heroic and misguided, is the kind of role Mortensen says he's always looking for: a nuanced, flawed character who eventually questions his own actions, and who makes the audience question as well.

"There's no such thing as a perfect movie or a perfect script, but I have to say, when I read that script, I thought, this is about as well-written a script as I've seen in some time," Mortensen said of Captain Fantastic, written and directed by Matt Ross. (Ross, also an actor, is well known for wickedly charismatic recurring roles on HBO's Big Love and Silicon Valley.)

Though Mortensen worried about the casting challenges of the film — six talented, thoughtful, adaptable child actors who "actually understand what they're saying and doing" is, he said, a tall order — Ross, "an extraordinary director," brought the cast together and created a loose, family atmosphere on the set. And Mortensen, who's previously played fathers of "usually just one or two kids," found the young cast to be "a constant source of amusement and inspiration."

The younger kids, especially, were "that thing that we all are until a certain age: You don't need a director or a second take, you just believe what you're doing and you are Superman or a princess or a Viking or whatever you want to be. You don't need the trappings, you don't need someone telling you how to do it; you believe it. … That's something as adults we all lose; we get rigid physically but also mentally. As an actor, you have to keep that with you."

Mortensen, an Academy Award nominee for Eastern Promises but probably still best known as Aragorn in the blockbuster Lord of the Rings trilogy, said he prepared for the role by collecting a few of his own possessions that he thought might resonate with Ben and bringing them to the shoot. (The film's Washington sets included Camp Korey in Carnation — where the family's compound was created — and scenes shot in Rosario Beach State Park, Eatonville, Index, Moses Lake, Fall City and other locations.)

"I looked like the Beverly Hillbillies arriving in my pickup truck," he remembered, "with bicycles and fishing poles and tools and pots and pans and clothes and sleeping bags, and I don't know what else." At least one of the items made it to the screen: a red-print Western shirt that Mortensen said he bought sometime in the 1980s, worn by Ben in a funeral scene.

"Even if [the filmmakers] had said no to everything I brought, it just helps me to get ready," Mortensen said, of his habit of bringing personal items to a shoot. "That was an extreme case of it — literally I brought a truckload. Sometimes it's just an object."

Though it's been a dozen years since Mortensen's Hidalgo visit, the actor didn't seem to have changed much; still low-key and soft-spoken, with an ability to make a promotional interview into a quietly friendly conversation. He still runs the independent publishing house Perceval Press in his spare time, and enthusiastically discussed the editing and printing process — "it's fun to try to get it as perfect as you can, same as in movies." A poet, photographer and avid viewer of the international political scene, he now mostly lives in Spain but travels the world, with recent movie shoots taking him to Morocco (Far from Men), Denmark/Argentina (Jauja) and Turkey/Greece (The Two Faces of January).

As he enters his fourth decade of making movies (his big-screen debut was in 1985's Witness, as a handsome Amish fellow with a couple of lines), he continues to look for good stories — whether they come from independent filmmakers or big-budget studios. (Even within the latter's limitations, he said, "there are directors who sometimes make really good stories.") And he's still in love with old-school cinema.

"I'm sort of old-fashioned in that I don't think a movie is fully realized until people have paid a few bucks to go into a room and sit down together, with strangers," he said. "I think there's something about that that's different. You can sort of simulate that in your house, but there's something about the movie house, the movie theater, that I think is valuable. I hope it never completely goes away."