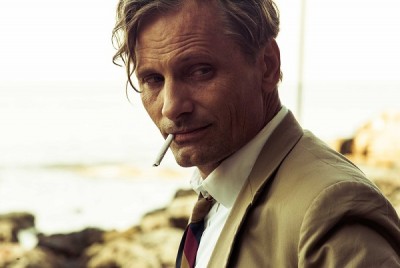 © StudioCanal.
Viggo Mortensen surely wasn't just cast because he's a great actor; it's because no one can rock a 1960s cream linen suit quite like him. - Leigh Singer, IGN.com

All hail Patricia Highsmith. As well as being a great writer she was an astute film critic...
...You suspect "her highness" would approve of Viggo Mortensen, the lead in this handsome period thriller based on a novel Highsmith wrote in 1964. As a dodgy, low-born, alcoholic American businessman, the 55-year-old actor is magnificently unhinged.

Soaking up the highlights of Ancient Greece, Chester MacFarland resembles a spick-and-span palace. In fact, as becomes apparent, he's a ruin. Every time he gets drunk another partition collapses; when he sobers up, the grand edifice dazzles again.

It's the best thing Mortensen has done in years.

Mortensen shows his character's rage and capacity for violence in subtle fashion, simply by the sudden way he will clench his fist or frown.....In terms of his actions, Chester is despicable. In his manner, he is genial and charismatic. Mortensen understands this contradiction. He doesn't try to overplay Chester's villainy but nor does he set out to ingratiate himself with the audience. It's a very clever and understated performance. Even in the scene in which Chester becomes blind drunk, he is still inscrutable.

Geoffrey MacNab
The Independent
15 May 2014

The performances are wonderful: Mortensen, as a man maintaining a battered façade of respectability, even as he disintegrates in alcohol and jealousy; Dunst, as a wearying sex-bomb looking for a way out; and Isaac (Inside Llewyn Davis), whose quality of watchfulness sets him apart from other young actors.

Jenny McCartney
The Telegraph
18 May 2014

Yet this is Viggo Mortensen's movie, his best work since A History of Violence (2005), another film about an apparently decent fellow with a dark past. Mortensen, playing a handsome, impassive mystery of a man, gives one of the year's best and subtlest performances.

Viggo Mortensen surely wasn't just cast because he's a great actor; it's because no one can rock a 1960s cream linen suit quite like him.

Mortensen may be best known for his dashing Lord of the Rings heroics, but his real forte is men imprisoned by their own fragile, self-constructed identities – like his David Cronenberg collaborations A History of Violence and Eastern Promises. His lack of vanity at showing Chester's weaknesses means he's superb again here.

He's played a family man with a dark past, an untrustworthy Russian mobster you wouldn't want to run into in a North London bathhouse, and a saucy Sigmund Freud up to no good. Viggo Mortensen's not the kinda guy you'd want holding a step ladder for you, is he?...
... the chemistry and forced friendship between the gents is outstanding. Isaac's still oozing that cool Inside Llewyn Davis confidence while Mortensen - who always brings that special something to all his roles - is one more on superbly scornful form.


This also marks a striking return to form for Viggo Mortensen (who left us a little cold in Everybody Has a Plan) – despite initially carrying the film with a smooth charm, there is a gritty inner darkness behind the welcoming facade that makes Chester so watchable – especially when seeing the lengths the character will go to to survive.

Andrew McArthur
The People's Movies
14 May 2014

Mortensen is terrific. His Chester is a trapped lion whose struggles just increase the damage he's inflicting on himself and the person he loves most.

Mortensen as Chester oozes with sophistication yet an unhinged anger roars in him he's the Jay Gatsby who never made it; a rogue who could never hang on to his roguish charm long enough for him to make his escape and disappear into a life he envisaged with his glamorous wife and his intense vulnerability is something Amini's screenplay hangs upon.


Mortensen is in his element with a rage that builds slowly but surely, eventually flipping his lid with devastating consequences.

Although the film is dependent on twists and dramatic tension, the plot is also driven by character performances. Mortensen, in particular, gives a standout performance as a deteriorating husband lost in a haze of alcohol and jealousy

The sight of a sweaty, drunken Viggo Mortensen – his suit crumpling in solidarity with the worry lines on his face – is increasingly horrific in this pleasingly old-fashioned, unhysterical 1960s-set thriller. ....Dunst handles her sidekick role with a mature ease that's new to her, but it's the men you remember: Mortensen in psychological freefall and Isaac always tough to read and hiding something behind a handsome, controlled exterior.

The powerhouse acting of Isaac opposite veteran Mortensen is electric, like watching two alpha males circling each other, planning their moves while keeping as much control and faux respect left to last the journey they are bound together to make


Mortensen is superb as a fraud whose facade crumbles but who retains his craftiness even in despair.

Mortensen and Isaac excel at the push-pull of this wary partnership, a pact between swindlers.... Mortensen, who can wear the hell out of cream linen suits, is at his intellectually acerbic best.

Mortensen's elegant-until-cornered Chester is a layered character with quite a moral range, from nefarious swindler to a man able to make a grand redemptive gesture.


The screenplay does not exactly sparkle and the characterisations seem a trifle bland, so that an actor as good as Mortensen cannot quite manage the range he has shown in some of his very best performances.

But he is the most charismatic of the three principals and worth watching closely throughout.

...Mortensen's elegant Chester is a multilayered creation with a beautifully enacted sense of moral ambiguity.

Rydal is a great partner for Viggo Mortensen to play against, but Mortensen's performance shines the most out of all three. From a handsome man in his best years, he turns into a weary crook who took too many wrong turns in life, and is now torn between regret and the urge to keep on going on a dangerous path.