Hello Fabián,
Today San Lorenzo plays the second match of the new tournament, against Racing in the Presidente Perón stadium. Last weekend we won the first match at home against Olimpo, but just barely, and in the last few minutes. That's one of the matches that we tied in the previous tournament in spite of playing better than our rival. That happened so many times that it cost us the championship. Let's see if good luck will follow CASLA´s good team work under Pizzi and we'll end up at the top.

On the 13th, Wednesday of next week, we play the Copa Argentina quarter finals against Gimnasia from Entre Ríos in Chaco. I think that one will be a tough match. El Lobo from Entre Ríos is a team that has played very well in this tournament.

© Unknown.
I wish I could go to Resistencia to see this important match. As you know, during my childhood I spent some time in the north of that province. It was there that I made friends with horses and learned a lot of things about vipers, monkeys, birds and the lives and deaths of so many creatures. It's a special place in the world for me.

Well, going back to today's match against La Academia. Like you, on December 21 2008, I was in that stadium to see our sad defeat against Boca in the triangular deadlock. It's a big field with passionate supporters. San Lorenzo will have to play very well to come out of there with the three points. Racing has prepared well, and they are as thrilled as we are about the new championship. Since I´m reading and rereading Albert Camus as part of my preparation for the film, (I will be working with a French crew in the north of Africa in a couple of months), I always think of him when I hear Racing being mentioned. He was a soccer player in his native Algiers, and he continued being a fanatic supporter of Algeria University Racing all his life. When he moved to France, he became a supporter of Paris Racing, one of the oldest clubs in the world (founded in 1882,) and then he threw himself into Avellaneda Racing. In 1949, he was in Buenos Aires to give some lectures. But he had a bad time due to the clumsy intrusions on his literary work by the Argentine government. They had already censored a play of his in the capital, and then Perón's Ministery of Culture demanded to read the lectures he was going to give, which the writer categorically rejected. Camus became enthusiastic about the great team Racing had then. They ended up as champions that year, and they also won the two following tournaments. Camus said he was very glad to see the team wearing the same blue and white jersey as his Algiers Racing. Paris Racing also has the same colours, but the stripes are horizontal. It´s a pity that the Argentine government treated Camus so badly during that visit. If they had allowed him to work and create in peace, he would probably have returned to the country more often, even to see the great 1959 San Lorenzo play. Surely the author, being the son of Spaniards and a connoisseur of good soccer, would have followed the famous Iberian tour of the unforgettable CASLA champions in 1947. Well, in spite of this lovely story about the link between Camus and Racing, I hope we teach the Académicos a good lesson this afternoon. 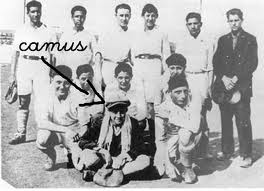 Camus the goalkeeper.
© Unknown.
Besides reading Camus' work, I´m reading history, essays and a lot of poetry from Algiers. One of the Algerian poets I have read is called Hamid Skif (his original name was Mohamed Benmebkhout.) He´s written very interesting things regarding the effort to seek out a creative and humanely dignified path in spite of the violence he experienced in his country. He has in common with Camus the fact that the two of them were criticised in France and Algiers by literary as much as political figures for promoting the complicated search for a way to a peaceful agreement. Skif also suffered censorship, and finally had to leave his native country. He died in Hamburg a couple of years ago. I´m sending you two of his poems, translated by Mireya Porta Arnau. "Counter Poem" and "Living."

The man who wrote it lives

in an ex-street
He´s already an ex-man

With a tempestuous heart
he comes back to life
The incandescent verb
The fever in the mouth
Tears his words
to make of them a machinegun conscience. 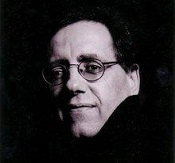 Well, Viggo, it seems that technology is cheating us, because in spite of having sent you the previous email three or four times, it didn´t reach you. I hope this one does. In the one that didn´t reach you, I was telling you that we watched the match against Olimpo last Sunday, on a warm sunny afternoon, with my brothers and my old man. 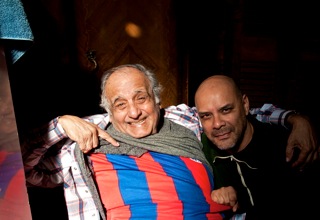 Casas feeling.
© Fabian Casas.
Today we are again subjected to colder temperatures. I was telling you in that mail that I liked how CASLA played very much, especially the nine, Cauteruccio. And the importance of having a nine with a goal. In fact, great teams like Cappa´s Huracán could not win because of not having a nine with a goal. It seems to me that the team didn´t show themselves much in the first match, but Pizzi´s idea of how to play was always mantained, that is to say, if you can´t get in, pass the ball backwards and change the game´s pattern and go on. A step back can be a step forward. It's like resistance; it's a virtue nature has to bend and not break in the face of adversity. On the other hand, that mutant Ortigoza came in and he crushed it. I think that there, with Mercier, there´s an extraordinary duo. This twosome already came out as winners with Argentinos Juniors. And when they mentioned our reserve bench, it looked like the world bank [tr. note: Word play. In Spanish "bank" and "bench" are written the same way] for the quality hidden there. Mama mia, how is Pizzi going to manage to keep those players with great talent who don´t come in the game from the word go? I think that CASLA lacked room for Verón to show his speed. He looked stuck against the penalty area, and this guy needs the wingers to create room for him. Today I will only be able to watch the first half because at eight o´clock I present a beautiful book by my friend Pedrito Mairal, so I will need you to tell me about the second half. Are you going to watch it?

I saw it, I saw it! The match has just finished. Ferrari reduced speed a little in the second half, but he never lost control on the track. As you must have seen during the first half, San Lorenzo was a fully oiled machine and capable of anything, always going forward, and they continued that way in the second half. Piatti, Cetto, Cauteruccio, Gentiletti, Mercier, Ortigoza and later Villalba, Buffarini - the whole team, actually - showing Racing, and everybody who watched the game on TV, how to dance. Like this, just like this. Great collective game. What we´ve been dreaming about since the last part of the previous tournament is becoming a reality. Here in Europe it's late, so I'm going to sleep happy. Tomorrow we'll talk some more if you like.

The photo with your dad is very beautiful. I thought of him during today´s victory. He´ll be wild with happiness. It would be lovely to see a match with him on our field. Let's see if I can get away a couple of days in September and we'll all go. It looks like this tournament could be a party. It's a pleasure to see our team playing with such ease and confidence.

I hope the presentation of your friend´s book went well. I just read that they recently found an unpublished letter from Camus to Sartre during the Forties in which the great friendship they initially shared is evident. That´s not surprising, but since the rest of the correspondence between these two great men has been destroyed, the existence of this short letter by Camus is news. It´s known that they were friends during and after the Second World War, left wing comrades and literary brothers, and that around 1952, they quarrelled because of their different opinions about Stalin´s totalitarianism and the concentration camps in his hellish "Gulag" system (Sartre in favour and Camus against the Soviet dictator) and, more than anything, about the use of violence and terrorism in revolutionary actions (Sartre in favour and Camus against violence and terrorism.) It´s a pity the way this happens with so many good relationships, how they are torn apart because of important arguments, and also many times because of trifles. Look how so many musicians, composers, painters, soccer players, etc quarrel after having been great friends and colleagues. There are, for example, Maradona´s squabbles with some of his teammates from the team that won the 1986 World Cup, and there are thousands of similar situations. On one hand, friendship is so simple and logical, and on the other, it´s something very fragile. Like the plants, rivers, dogs, horses, and the creative talent, we have to take care of the friendships we have with human beings.

Dear Cuervo, I´m answering you from here because I got paranoid about the other email that could never reach you. Yesterday I watched the first half of the match in a bar three blocks away from where the presentation of Pedrito Mairal´s book would take place. I ran over there after work, looking for a table, a coffee, a TV that was turned on, with the urgency that usually Superman has when he's dressed as Clark Kent and is looking for a phone booth to change his clothes and he doesn't find a place. 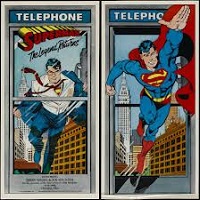 © Unkown.
Finally on Honduras and Acuña de Figueroa, I found a little bar and I asked for a coffee, some water and I sat down to watch the match that had already started. A ceiling lamp reflected its light right on the TV, which made viewing difficult. At a table, in front of me, there was a boy with a book taking notes. But I could tell he was a Cuervo, since he was looking sideways at the TV and he celebrated Cauteruccio´s goal with me when he stuck it in the corner of the net. The first half over, I went, satiated, to present Pedro´s book because CASLA played the first half well and because Ortigoza keeps on being great. Afterwards, when the presentation was over, Lloyds, a Cuervo and writer friend, arrived and hugging me, said: "They won, they are liked and they score goals." "How did it end up?" I asked with my belly already filling with joy. "Three-zero" "Three. Great." On August 17, Anita will be three years old. "Anita," I said at night, "Ciclón, scored three goals in your honour." And she hugged me.

Friendship, as you say, is unstable, but it's one of the strongest feelings we humans can have. There's a Sartre text in the farewell to Camus, when he died, that's magnificent. For example, Pedrito Mairal is a writer I admire very much and he's also a great friend. According to Montaigne, in a friendship you only wish your friend the best, more than for yourself. That is the purest friendship. Hugs.

PS.: In this chat, as well as in others, we talk as much about philosophy as soccer. Did you ever see the brilliant video from Monty Python where the German philosophers play a soccer match against the Greeks? It's very good! Here is the link: