By Diego Batile - translated by Zoe 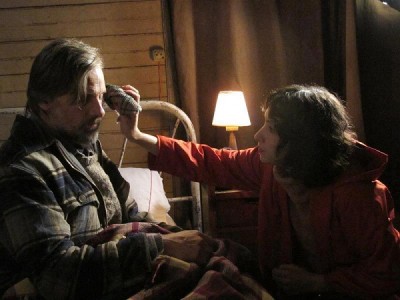 Image John Harris.
© 20th Century Fox/Haddock Films.
Todos tenemos un plan is a strange combination. On the one hand, it is the first film as writer and director for young Ana Piterbarg. On the other hand, it's an ambitious production on the part of the team that won the Oscar for El secreto de los Ojos [The Secret in Their Eyes] and the debut in Argentina cinema of a world star like Viggo Mortensen who's achieved as much popularity (with the Lord of the Rings trilogy) as prestige (with his contributions in several of David Cronenberg's recent films.)

That tension between a first film that has quite a bit of atmosphere and introspection and the requirements of a large scale production with international scope is the first thing that you notice in Todos tenemos un plan, a film that's more than worth seeing, with more than a few innovations and attractions, but that ends up being also somewhat erratic and leaves you with a contradictory, even disconcerted, sensation.

Mortensen takes a risk with a double (or triple) role. On the one hand, he plays Agustín, a pediatrician from the upper middle class, in full existential crisis, among other things because his partner of eight years (Soledad Villamil) is pressing him to agree to adopting a baby. On the other hand, he embodies his twin brother, Pedro, an outsider with very precarious health who lives in the deepest, roughest, most squalid Paraná delta, and participates in kidnappings for ransom, led by Adrián (Daniel Fanego), an authentic "heavyweight" in the area.

It's not wortwhile to give away much of the plot, but the fact is that a few minutes into the film, Agustín finds an opportunity to flee his distressing existence by passing for his brother Pedro. This new life includes an emotional relationship with Rosa (Sofía Gala Castiglione), a twenty-something who helps him with a small beekeeping venture and also becomes his confidante and lover.

In the film, the Hitchcock-like thriller about assumed identities lives side by side - not always harmoniously - with the film noir that references those stories from the American south ( like the ones set in the swamps of Mississippi).

The problem is that Piterbarg progressively abandons the crime structure (and leaves several loose ends) and the suspenseful buildup to drift toward a more intimate psychological thriller. To that indecision are added redundant and too explicit literary references (Los desterrados [The Exiles] by Horacio Quiroga) and too many fairly obvious metaphors (the work in the beehive.)

This aformentioned tension is also apparent in the visual aspects (the work of the very talented director of photography, Lucio Bonelli, is enthralling, but at times drops into a certain preciosity and gloating) and in the musical aspects (with a soundtrack too underlined and invasive). So that the density, the force of the wild nature of the Delta, that functions almost more like a character in the story (and not a minor one) are progressively lost.

In acting terms, Mortensen's dialogue at times looks somewhat uncomfortable and forced, although his work is competent nonetheless. Nor does an always remarkable actress like Villamil shine as she does in her best roles (she is not made the most of this time) and, therefore, the contributions of Fanego and Castiglione turn out to be the most intense.

Beyond its clear unevenness, the film has a lineup of resources (visual, acting, dramatists) that make it a very worthwhile proposition. Perhaps it does not reach the heights of enormous expectation that the incursion of Mortensen into our national cinema generated, but even so, it excels as a production of unquestionably high rank.