By - translated by Ollie and Zoe 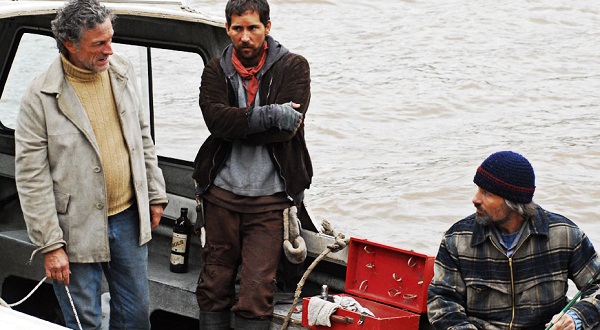 In a way, it is Rosa who is telling this story and the one who will continue it. She is the character who is most aware of those facets of light and darkness, and the only one who puts into words what her plan is. Unlike the others, Rosa is clear; she doesn´t lie or try to project a different image of what she is.

Adrián grew up with the two brothers, Agustín and Pedro, in the islands. He never got out of them. He can sense there´s a world out there, and this can be seen in the clothes he wears and a certain air he tries to affect. But he could not distance himself from the island or make a life for himself. So he did what he could and what he could is not very much. The film captures a crucial moment in his life.

For Daniel Fanego, his character "relates to others by reason of supremacy, which I think is the code and law that Adrián knows. The stronger is the one who rules and the one who can take the initiative."

Rubén is the victim within the Pedro, Adrián, Rubén triangle. He Is the last one who came into that society. He is a character who is quite clumsy, but, at the same time, has a certain intuitive sensibility.

For Javier Godino: "Rubén is a wild guy from Tigre, very down to earth, very humble; supporting himself by hunting or fishing with his family is enough for him. But he has to earn money for food, to feed his children, for his children to have school equipment, and so he has to bow his head to what his godfather - Adrián, Daniel Fanego´s character - orders and gets into murky things. He has to get on the wrong track and betray his own nature to get money."

Claudia is a very strong woman, and is the one with common sense in the story. She´s the most concrete, the one most attached to reality in carrying out a project to the end. She tries not to see what doesn´t fit into her plan. Finding herself in an unexpected situation, she starts to reconsider everything that until that moment she didn´t want to ask herself, didn´t want to hear or see.

Soledad Villamil defines her character as: "Claudia is the wife of Agustín, one of the brothers. She is a middle class professional woman who has managed very well in one aspect of her life, the professional , but in her personal development, she has a score to settle, a very strong desire to fulfil a dream, that of motherhood.

She is a very determined, very strong woman, and I think that the attraction, not only of this character but other characters in the film, is that they believe that things are one way, or should be one way, and life begins to reveal to them a very different thing. And this is a bit what happens to Claudia. She already has her plans, has organized her life and she believes that everything will go in the direction she intends, and yet events are showing her it won't.

Claudia and Agustín have a complex and contradictory relationship. Although they are a married couple, committed to each other for years, with the passage of time a distance has grown between them that the character of Claudia does not quite come to terms with. Suddenly life has become like on automatic pilot, and the relationship has continued by inertia without major inconveniences; each has succeeded professionally, but the unease has spread towards other areas, through diverging ways, and Claudia is a character who until life makes it quite clear and confronts her with it, she doesn´t see it or want to see it. "

Pedro is the other side of these two brothers. He is very selfish in one respect, while at the same time arousing everyone´s envy a little because he was always very loyal to what he felt, to what he wanted. Viggo Mortensen says: "With the challenge of playing two characters, what we were concerned about, and we talked about that every time I met with Ana in Buenos Aires during the years before filming began, was that there had to be a difference both physical, no matter how slight it was, as well as psychological between the two brothers that could help in the narrative. Although they looked very similar, being identical twins, some important differences had to be stressed with subtlety. That was the idea."