Viggo Mortensen: "I'm attracted to what scares me"

By Roció García - translated by Ollie, Rio and Zoe 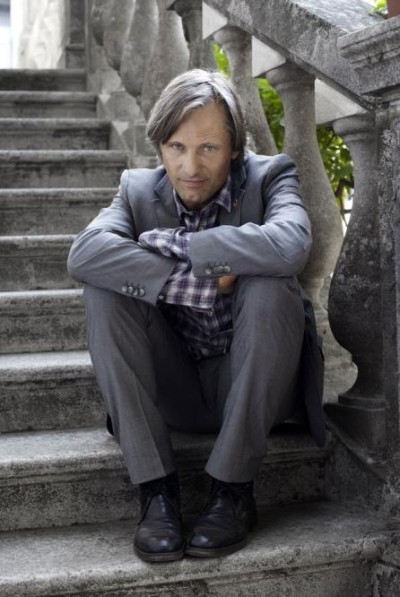 Image Xavier Torres-Bachetta.
© El País.
Seeing him walking down the street, woolly hat, jacket with the emblem of his beloved San Lorenzo and a plastic bag with books, unhurried gait and a kind gaze, nobody would say he's quite a Hollywood film star. Viggo Mortensen [New York, 1958] has set aside the big film productions for the moment to shut himself in a theatre in Madrid, in the naves of Matadero, and started working on, along with Carme Elías, Purgatorio, the play about forgiveness and guilt written by Ariel Dorfman that has already put up the `Sold Out´ sign.

It means his return to the theatre after more than 20 years, and it's the first time he's doing it in Spanish, a language he learned in his childhood in Argentina. Besides the theatrical billboard, his name exercises an irresistible magnetism from the cinematic one as well. Tomorrow is the Spanish opening of his third collaboration with David Cronenberg in the film, A Dangerous Method, where he gives life, a troubled one, to Sigmund Freud.

[Producing] Purgatorio has not been an easy process, much less a swift one. The play was not able to be performed two years ago due to a family problem of Mortensen's - his mother's illness - and rehearsals had to be suspended. "I regretted letting down the actress, the theatre, the public then. I needed to close this circle. I am happy to have done it; I feel good. Purgatorio's text is complicated, fiendishly difficult, and I think that now we've been refining it, perfecting it. It's clear that sometimes waiting for good things is worth the trouble." Mortensen, who has a calm and thoughtful way of speaking, considers it an honor to take to the Matadero's stage, where he has enjoyed "stupendous actors and good productions."

What brought you to theatre? "Fear. I've done theatre because it frightens me. I'm attracted to everything that frightens me. It's not like in film, where you do a take and then you can do another and another. Theatre is just one live take that lasts an hour and 40 minutes, depending on the performance. It's a new adventure every night. If you get off track, you have to see how to get back." That feeling of fear and adventure is what he also strives to bring to film, where he just finished shooting Todos tenemos un plan, by the novice Argentinian Ana Piterbarg.

He has the feeling that he's never come across two characters, that of Freud and the man in Purgatorio, who talk so much. "But you have to tell everything," he contends. "It's very useful and healthy to talk about everything, as Freud did, figure things out, look for connections, confess without being judged, to be allowed to say everything, to feel. It seems brilliant to me." And he does so, talking about the forgiveness that underlies Purgatorio and about repentance. "Everything can be forgiven; whether or not one does is another matter . Forgiveness isn't easy and I understand that there are people who cannot forgive, but one can manage to do anything. It's interesting to discover how people who are very conservative and Catholic, for example, have criticized me and have commented that it's unforgivable that I should say that one can forgive ETA, when forgiveness is, I believe, the most Christian feeling that there is."

The portrayer of Aragorn in The Lord of the Rings, the perverse Alastriste from Agustín Díaz Yanes film, the wicked guy from A History of Violence or the anguished father from The Road. All of the characters tackled by this actor are born of exhaustive and obsessive work. Is that part of your success? "I don't know. Everyone has their own way of doing things. As for me, I love the preparation period, imagining the characters and playing like when I was a little boy. In my profession, I think it's very useful to maintain that fondness, that taste for play." And so to deal with Freud, he traveled to Vienna, read hundreds of books, looked for photos, studied. Just focusing on the cigars that the Viennese psychoanalyst smoked, he shared dozens of emails with Cronenberg. "With many other directors, if not most, I don't have the security of being able to share this process of preparation that's so personal and private. With Cronenberg, it's different; he understands that process and likes it. So I know beforehand that the filming will be fun and good and that the film is fine. It's guaranteed."

That obsession of Mortensen's leads him to seek out the poetic side of everything that he does - "There is always something tender in people. Everyone has been a child and a child doesn't start out being bad; that never disappears completely" - and he points to Freud's phrase, " No matter where I go, I always find that a poet has been there before me." Going out on the street, he doesn't meet up with a poet, but with an Argentine boy. "Are you Viggo?" "Yes." "I thought so when I saw the San Lorenzo emblem." His beloved San Lorenzo. And then, yes, Mortensen's face is pure poetry.
Top of this page
Last edited: 8 January 2012 07:52:42
© El País.