Alatriste Returns To The Mud Of The Trenches

By Guillermo Altares - translated by Ollie, Remolina, Rio and Zoe 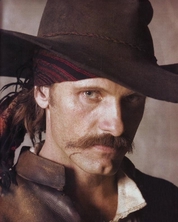 © 20th Century Fox/Estudios Picasso/Origen.
Two sentences can summarize the spirit of this old, skeptical and tired infantry soldier named Diego Alatriste, who observes the Golden Century from the mud of the trenches and the betrayals. "When they give a soldier something to drink, he is either f***ed or they are going to f*** him" and, "I lived as I could, the way my time wanted me to live, and no path is wrong, except the one that takes you to the gallows." The two appear in El puente de los asesinos (The Bridge of the Assassins), the seventh volume in a series that has sold three million copies just in Spanish.

The last Alatriste, Corsarios de Levante (Pirates of the Levant), was published in 2006 and since then Arturo Pérez-Reverte (Cartagena, 1951) has dedicated himself to other activities, like getting two complex novels off the ground, Un día de cólera and El asedio. However, this autumn the captain and his faithful companion, Íñigo Balboa, will be back in the bookshops on the 27th of October, released by Alfaguara, with an adventure tinged with political intrigues, mostly taking place in dangerous seventeenth-century Venice.

"Alatriste is a place where a variety of readers meet, recognize each other, and get together. I go there as a reader more than as a writer," explains Pérez-Reverte. The conversation takes place in Madrid's Barrio de las Letras, a very Alatristean place, where Quevedo, Góngora, Lope de Vega and Cervantes used to live. While he waits, the author reads an essay about Tintin, a character who turned him into a reporter and later, certainly, a storyteller. "I'm a línea clara writer," he explains, as a way of defining a precise style which, without hindering the storytelling, often pauses for descriptions in which every detail is important.

The Alatriste series was born 15 years ago, and the author, who thought that his millions of faithful readers wouldn't follow that foray, was the first to be surprised by the immediate and overwhelming success it achieved from the first volume on. "I began the series purely for my own enjoyment, as an homage to the literature of the Spanish Golden Age combined with cloak and dagger novels," says the author, adding, "It was also an attempt to explain to my daughter's generation an era - the 16th and 17th centuries - that had disappeared from Spanish literature, a period that marked us for the better but even more so for the worse."

As the years go by, the series, probably because of the increasingly adult and therefore increasingly steely viewpoint of the narrator Íñigo Balboa, has been becoming more cynical and also more contemporary. The history of a country that believed itself to be the center of the world, without being aware of the disaster that lay in wait for it just around the corner, doesn't seem very far away. "In fact, I'm talking about the Spain of today. We are what we are because of those centuries of hypocrisy, of omnipresent religion, of the Church, of the confessor whispering in the king's ear who should be burned and who should not, of absurd wars in which we wasted all the gold of America," says the novelist. "We lost the train of modern times due to that Spain, which suffocated us. I have always said that in Trent we got the wrong god. While the countries with a future were betting on a modern, commercial, Lutheran god, an open god who let books be read and progress be made, we placed our bets on a dark, gloomy, vestry-like, grumpy, bad-tempered god that left us in the ruin we are still in. There have been cretins who have not read the books, who say Alatriste is a hymn to Imperial Spain. It´s a lie. I think few things as stark as Alatriste have been written about Spain."

One of the points of contact between this series and the rest of Pérez-Reverte literature is the passion for research, the study in depth of a universe that will then become literature. "A novel is a wonderful pretext for reading," he interrupts.

"In Alatriste I tried to describe Spain in different ways. In The King's Gold, I explained the economy; in The Sun Over Breda, the war; in Pirates of the Levant the Mediterranean sea; in Purity of Blood, the religion and the Inquisition, and in this last one I wanted to talk about Venetian politics, which were very important to Spain." This probably comes from his passion for classic Hollywood cinema - and for cinema in general -, but there are two elements that recur throughout the whole series: meticulous and real supporting characters, full of life, and a bad character, the dangerous Palermitan Gualterio Malatesta, who measures up to his opponent. Umberto Eco said superheroes are always superheroes as long as they have an opponent as great as they are. And this rule is fulfilled in Alatriste. "Every hero needs an opponent. Alatriste is a very ambiguous hero: he has tortured, has cut a woman's face, has killed, he's a less than desirable character. He has fallen on that side in the story as he could have fallen in on another one. Those are the true heroes. I've met a lot of alatristes, who could have been one thing or another. It's essential to give him old enemies with whom, at the end, he can have a greater understanding than with his friends. A character is also defined by his enemies. Every man who walks through life, who takes risks, who gets involved, who fights, who loves, makes enemies, leaves corpses in the ditch. To live means to choose and to take sides, and when you take sides you're on one of the sides. I've always distrusted those who declare that they have no enemies; they're either lying or they're idiots."

As it couldn't be any other way in a series that recounts the adventures of an old soldier, war is an important element in Alatriste and also the last novels of Pérez-Reverte, who during a great part of his life was a reporter in battlefronts of half the world.The author has seen enough combats and has read enough about them to know that weapons and places can change, but soldiers and death are always the same. "War is like alcohol, it brings out everything you have inside," he assures us. "There are no differences in how the individual feels. It doesn't matter whether you have a grenade launcher or a sword, the sensation of tension, fear, loneliness doesn't change. My advantage is that, having lived in those places for a time, I can lend my characters my real impressions. There are novelists, very respectable ones, who write from the imagination, and others, like me, who write from memories."