By Viggo Mortensen - translated by Ollie 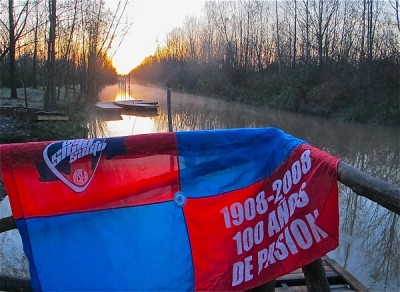 My greetings from the Paraná´s delta, where I´m taking part in the filming of Ana Piterbarg´s movie, Todos tenemos un plan. Although I cannot be with you, know that our flag is present every day of the shooting.

It seems that the new site www.sanlorenzo.com.ar is going to be very nice and I think the covering of all the CASLA activities is going to be more complete than before. The club has invited me to contribute in a little corner called "Sobrevuelos". There, from time to time, I´ll leave texts and/ or images related to San Lorenzo. Within a few days we'll post a first conversation I had with my cuervo brother Fabián Casas.

I hope you enjoy the club´s renewed web site. I also hope that all those who can take part next Tuesday July 5th in the demonstration for the return to Boedo . I will be present, at least for a while if it´s possible - it all depends how our filming goes during the rest of the week.