Excerpt from the Lleida Press Conference 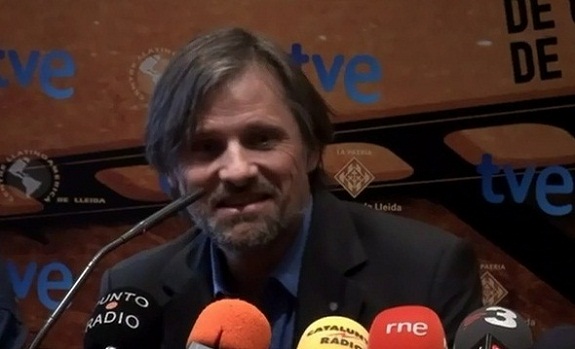 © EFE.
Viggo - I´m getting to know myself bit by bit (laughs) and one thing that always happens is that when I´m on the right path I get a little scared. Rather quickly. Always, after saying "yes", hanging up the phone or coming out of the office... they´ve said to you "OK! We choose you." or "Your test was the best." Or they call you sometimes, and if you are lucky, they say "We thought you´d do this role very well." You read it, you think about the script and make the leap. And everything is fine but at the moment you do it, myself at least, then I get scared and think "Well, they think I can do it, but I don´t know." The truth is that I say it half jokingly, but a lot of times I say "I don´t know how to act. Don´t know how to act!" Because you look at each character..."How do you do this?"

But it's hard to see the movies they show here in the country they come from, much less in Europe. So I think it's very important that these films are shown somewhere like Lleida, in a Mostra like this one, where they do things well, with intelligence. And from what they've told me, the audience that comes to see these movies is a very enthusiastic one, very involved with film as art, isn't that so?

For me, it's all telling stories, right? Music, poetry, making films, directing, acting. The person who does the lights, the makeup guy, the makeup woman. All the people who work on a movie are, ideally, forming a team in order to tell a story in the best possible manner.
Top of this page
Last edited: 3 May 2011 14:46:17