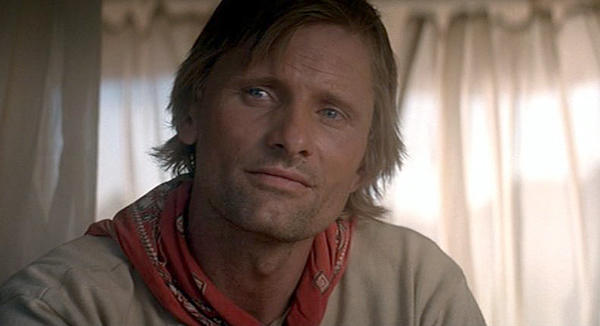 © Touchstone/Buena Vista Pictures.
Mortensen, who excelled as Aragorn in the Lord of the Rings trilogy, said on Tuesday during a press conference that he's happy with his latest movie, in which he plays Frank Hopkins, a legendary cowboy who gets invited to take part in a horse race in the Arabian desert.

His horse Hidalgo is the centre of the story and he also shares honours with Omar Sharif and the British actresses Zuleikha Robinson and Louise Lombard.

Mortensen, who spent his childhood in Argentina, said he very much identified with the Latin American culture, but he remarked that in life the most important thing is to "be as you are and live as you live and not where you are and where you live."

"It's very sad, I wish him all the luck in the world and I want him to get better," the actor said. "But you have to tell the truth, the man hasn't taken care of himself, he has thrown away the gift God gave him at birth and I'm sorry for that," he added.

Mortensen said that he will start filming in January, as the star and together with Mexican actor Gael Garcia, the movie Alatriste, based on the novel by Spanish author Arturo Perez-Reverte.

He also criticized the US' opposition to same sex marriages and the politics of president Bush on the subject.

"Bush, or those in charge of his public relations and who give him issues to talk about - because he can't think of a lot of things to say himself - they thought that it would be an interesting point of attraction and that they could corral the religious conservative vote," Mortensen said.

"There are huge problems like the loss of three million jobs, since he won...when he stole the presidential seat," he added. Mortensen remarked that he doesn't recognise Bush's investiture. "To fix the problems in my country, those this man has created, many generations will have to pass, "he observed.
Top of this page
Last edited: 13 January 2011 09:59:50