By Ferran Imedio - translated by Ollie and Zoe 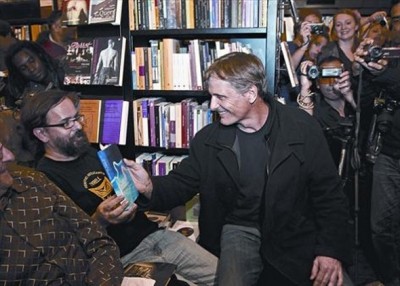 Promotion and reading of The Anthology of New …
Image Carlos Montanes.
© El Periodico.
To Viggo Mortensen, many of his fans, as enraptured by his art as an actor as by his attractive masculinity, would say Gustavo Adolfo Bécquer's "Poetry is you." Yesterday they had occasion to say it to his face and to listen to it almost from his lips, because yesterday at La Central del Raval, the American artist recited four poems from The Anthology of New Argentine Poetry, which includes pieces by 22 authors. The actor, who lived in Argentina when he was small, is founder and owner of the publishing company, Perceval Press, that has published this work. The handsome New Yorker had the 200 people that packed the first floor of the bookstore in the palm of his hand with his role as bard and with the juicy anecdotes he told.

Before beginning, Mortensen, who was in Barcelona last year to see a concert at the Sala Apolo with John Doe and the Sadies ("I come less than I would like because I would like to be able to speak Catalán better," he confided to this newspaper at the small [press] gathering.) "I hope that my fame as an actor will result in people coming." He could not have imagined that the event would be so crowded. The artist couldn't believe it when he walked into the room. "Barcelona and Catalonia are famous for having many readers. Here they are. I'm impressed." And after a brief presentation in Catalán, he began to read two poems by Fabián Casas and then finished with two by Martín Prieto. He dedicated his "theatrical exercise" to Nestór Kirchner, the former president of Argentina, who died yesterday, "because he wasn't perfect, but he did something for the continuation of democracy in the country."

His reading, accompanied by the poets Gustavo López and Laura Lobov, didn´t seem like enough: "Don´t worry. I´m not going to read the whole book," he warned at the beginning. It wouldn´t have mattered to the audience, with an overwhelming majority of women who asked him about literature and his style when writing. "I have something weird, an old-fashioned slang, because I left Argentina when I was 11. Besides, I began as a poet in English in the United States." The translations that have been made of his work, which will be included in the second part of the anthology, don´t quite convince him. "Translation is treason," he reasoned.

The actor from The Lord of the Rings, who signed autographs for almost an hour (the same amount of time as the book presentation lasted), seemed relaxed and approachable. He explained, among laughter, how one day he had to escape the stones thrown at him him by Newell fans after a soccer game, and how one of them recognized him: "Go on, fucker, put on the ring and disappear." And he listened with attention to the poem of a spectator in the crowd: "Go to the consulate, change your passport and we'll sign you up for the next anthology." Last night he only spoke of literature, not of film. Of his publishing house, that even publishes works in Russian, not of his films.

Those who still find it strange that the protagonist of A History of Violence, who will give life to the father of psychoanalysis, Sigmund Freud, in a film, should present a book of poems are those who don't know he is the Hollywood actor who is more like Leonardo da Vinci: he is also a photographer, writes poetry, paints and has been a musician.

Ariadna Gil, 41, with whom he´s been connected for almost a year, was not among the audience. They had met in 2006 during the filming of Alatriste, when she was married to writer and film director, David Trueba.