All Of Your Dead

By Fabián Casas - translated by Ollie, Sage and Zooey

Source: Perfil
The Argentinian poet and writer is one of the most avid readers of McCarthy's work. In this brief essay, he runs through his bibilography, with the excuse of the premiere in the theatres of the adaptation of The Road. For Casas, McCarthy, a writer of desperation, owes a lot to William Faulkner and somehow he tells us about the possible end of this long agony we know as human existence. 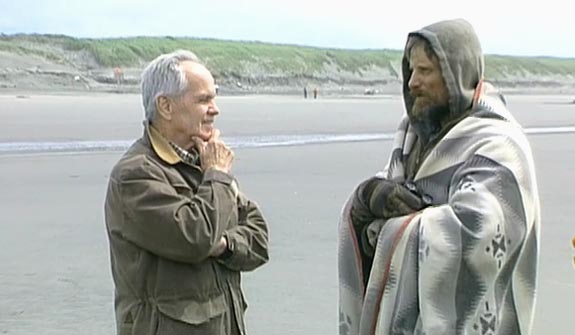 © 2929/Dimension Films.
To keep in mind: if anyone gives you a book by Cormac McCarthy - on your birthday, Christmas or whenever - they are really giving you a chunk of pain. Broadly speaking , people could be divided between the inspired that domesticate emotions and reach nirvana and the slaves who, as Rodolfo Wilcock wrote, think only about sex and death. McCarthy writes for the latter. He´s got ten or twelve books and almost all of them are translated into Spanish. Although he became famous - and a bestseller - through an adaptation the Coen brothers made of his novel No Country For Old Men, the writer has been banging his Olivetti since his youth and writing with little selling success but with an impressive talent. It is easy to understand. It is not common to have a chunk of pain in your home, on your night table or in your library. But somehow McCarthy persists in always transmitting the same thing, varying, according to two great periods on his writing, the stylistic form, but not renouncing the central themes: there´s no possibility of a good ending, we are here to suffer, heaven is empty and the human race usually produces specimens that go too far in an abominal way.

Surrounding all this, as sole witness, the extreme beauty of nature, be that the lush forests of his native Tennessee or the imposing desert on the frontier between the United States and Mexico. A zone of cultural crossings that fascinates the writer who, in The Road, his last book up till now, imagined the end of the world as a place with a devastated sky, the sea black and tribes of cannibals eating the weak. Neither the country nor the world is for the weak. Nor are the books by Cormac McCarthy.

The truth about the species. The cliché surrounding Cormac McCarthy, its rhetoric, says he is one of the last cloister writers. Like J.D. Salinger, like Thomas Pynchon, the man likes neither cameras nor interviews and he´s only given a few, and very strategic, like the one he gave to Oprah Winfrey on the occasion of the release of The Road.Winfrey hosts the most viewed program in the United States. Each book she recommends becomes a gold ingot. It is said that Oprah had a shitty life and one thinks it is this past that made her a potential reader of the unsociable writer. But before Winfrey and the Coen´s Oscar, McCarthy wrote a very strange first novel: The Orchard Keeper [1961]. The story is simple, as if the narrative wasn´t the most important thing. The lives of three men - an old man, a kid and a bootlegger - cross in a spot anchored between the misery and the splendour of nature. As if he were a watercolor artist, the writer describes and turns the natural cycles of the earth, water and air into the central characters. The earth is too beautiful and implacable. And as much as we persist in stealing the spotlight from her, she will take revenge on us as if we were annoying mosquitoes.

This novel of McCarthy's comes directly from William Faulkner's County. The prose is complicated and carried to extremes. Atmospheres are created and little is said. The narrator quickly takes an ethical position. He writes without consulting the reader. He neither soothes him nor leads him. He uses the Faulknerian technique of quotation marks to emphasize a character's thoughts, but one doesn't know for certain who's doing the thinking. I remember that Faulkner at one point suggested that The Sound and the Fury be edited with paragraphs in different colors in order to note the temporal progression of Benjy's thoughts, that dear and unforgettable deaf and dumb fighter. But he decided to fuse everything into one single mass and in that lies his immortal greatness. McCarthy follows the master. In fact, one has to return to the book several times to know what it's about. The brilliant thing is that it doesn't matter, because our spirit is captured by the atavistic speech, in a prose that speaks the truth about the species.

The Orchard Keeper was published by Arthur Eskirne, from Random House. The same press house as Faulkner. This novel was followed up by Outer Darkness [1968] - about a girl looking for her stolen baby, the offspring of an incestuous night with her brother - and Child of God [1979] , about a necrophiliac serial killer called Lester Ballard. As you can see, it´s getting worse. After this comes Suttree - the closest to an autobiography - and, already in the eighties, his first masterpiece: Blood Meridian [1985]. Here he begins his period of study of the frontier between Mexico and the United States in the XIX century. The characters in Blood Meridian are gangs from the Army and pirate cowboys pursuing each other while killing indians and scalping them to get a few pesos out of the current Law. The story starts with the ups and downs of a kid - who has no name - and tells of his initiation in this senseless war to his becoming a true rabid toy. Next to him, there´s one of the most macabre characters imagined by McCarthy, Judge Holden, a bald,cruel, murderer, child rapist, charismatic son of a bitch, a prefiguration of evil incarnated on earth, that preceeds - and surpasses - No Country for Old Men´s Chigurh.

I began reading McCarthy with the final book of his border trilogy: Cities of the Plain [1998]. When a writer is seriously good, it's not necessary to take the books in order to get a complete feel for his universe. Here the end of the unique era of ranch cowboys who saw the first strides of modernity approaching was narrated. And also the end of the friendship between John Grady and Billy Parhan. One of those two is going to die clinging to the redeeming love of an "untouchable" prostitute. The trilogy begins with All the Pretty Horses [1992] - the first best-seller by this writer - and continues with The Crossing [1994] - another masterpiece at the level of Blood Meridian. How McCarthy was describing the daily life of these cowboys hit me. Their methodical meals, the long drifting, the taming, their obsession with horses and the long telegraphic chats that served to identify each character. Faulkner's prose at this stage gives way to a shorter syntax, precise, like a knife fight. But Faulkner still remains. In the first part of The Crossing, a boy takes a she-wolf that he has trapped up to the mountains of Mexico where she came from, to liberate her. With echoes of Faulkner's extraordinary story called The Bear, we receive a blow to the head following the fate of the youth and the animal in the midst of human evil.

In almost all McCarthy´s books the characters do senseless things: the kid and the she-wolf in a long almost religious pilgrimage, two very young orphan brothers try to get back their stolen horses, a young man tries to kill a sheriff, an old man takes care of a corpse that somebody dumped near his home, a secondary character always bursts in and begins to follow the main characters, apparently for no reason, as does the Italian young girl with Quentin Compson in the chapter in which he commits suicide in The Sound and the Fury. And isn´t it a bit like that? People get together, mingle, forget each other and, sometimes, reproduce in the midst of an absolute sloth. And when we look at one side, someone is following us and by only turning our heads we see ourselves following another. And this until death. In the Waste Land, T.S.Elliot wrote "Who is the third who walks always beside you?/ When I count, there are only you and I together/ But when I look ahead up the white road/ There is always another one walking beside you".

The Insulted and Humiliated. Now The Road has just premiered in theaters, starring Viggo Mortensen and Charlize Theron. The novel is a good gift for Father's Day. Cormac dedicated it to his eight year old son Francis. It's set in a dystopic future. With planet Earth devastated by something that went wrong - a nuclear explosion? A never-ending war? - that the writer never bothers to explain. The father and son have no names, either. They are only an aged father and a very small son fleeing from a city in ruins and surrounded by cannibals and other guys who try to survive. Throughout the whole book - as if they were characters from Beckett - the protagonists drag a shopping cart with a few belongings that they carry from one place to another. Sleeping rough under a gray drizzle, and at only one point does the narrator allow the father to have a whiskey and both of them to bathe in hot water and eat canned food.

During the entire journey, that you follow step by step at the same time as the characters, the father transfers to the son, as his only testament, all his terror. When he finally dies, the scene is terrible. And whoever is a reader and has dead ones dear to them won´t be able to stop crying. We are the children of imperfect beings, Cormac seems to say, and we will be terrible parents. That´s what there is. But, when closing this intense novel, the Argentinian reader receives yet another blow. He realises that those beings - father and son - who were walking with their cart, starved to death, through the streets at the end of the world, seem very familiar to us. They are the displaced ones of our social system, coming out at night to gather the carrion left to them by those who have a roof. In McCarthy´s novel, the end of the world is more democratic - he implicates everybody; in our territory, the end of the world already began and is exclusive to thousands of poor people. This is no country for cynics.
Top of this page
Last edited: 16 July 2010 14:20:25