Journey Along 'The Road' Terrifying But Hopeful 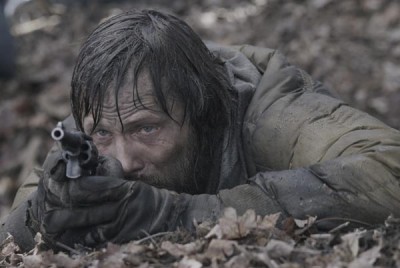 Image Macall Polay.
© 2929/Dimension Films.
Sure, movies don't get more bleak and depressing than The Road, but they don't get more well-crafted, either. Besides, the hard-to-watch journey of father and son through a post-apocalyptic wasteland that includes poverty, suicide and cannibalism -- to list only a few potential horrors -- remains a sparsely compelling look at unconditional love in times of utter and complete despair.

The bond between a man (Viggo Mortensen) and his son (Aussie newcomer Kodi Smit-McPhee) -- both named as Critics Choice Awards nominees by the Broadcast Film Critics Association -- is even occasionally as sweet and it is somber. "Here's a treat for you," the father says before handing his boy an old can of Coca-Cola, salvaged from a demolished pop machine.

Later, when the going gets unbelievably tough, it's the kid doing some reminding, and even a bit of teaching, in asking, "Are we still the good guys, Dad?"

As based on the Pulitzer Prize-winning novel by Cormac McCarthy, The Road meanders between the pair heading south to hoped-for salvation and flashbacks to when the man and his pregnant wife (Charlize Theron) encountered the great environmental cataclysm that brought fire, earthquakes, dirty snow and anything else one might expect from moments near the end of the world.

There is at least one dream sequence about happier times, and then another about how the love of the man's life just drifted away into the cold and darkness. (If it's not the saddest image in movies this year, then please don't reveal whatever tops it.)

By the way, that's Lake Erie (filmed near Erie, Pa.) posing as the Atlantic Ocean in all its grim glory. Let's all hope this is one movie that never can be called prescient.