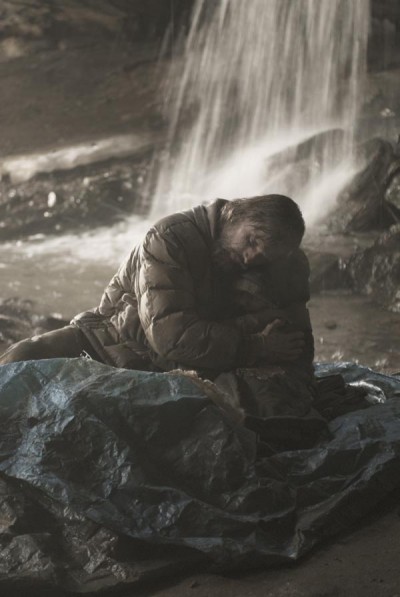 Image Macall Polay.
© 2929/Dimension Films.
How could anything so bleak be so promising?

The postapocalyptic America painted in the opening lines of Cormac McCarthy's The Road, now masterfully brought to the screen by John Hillcoat (The Proposition), brings a catch to the throat: "Nights dark beyond darkness and the days more grey each one that what had gone before. Like the onset of some cold glaucoma dimming away the world."

And yet even when hope has been exhausted, there is always love. This is what sustains us in watching the struggles of Viggo Mortensen and Kodi Smit-McPhee as an anonymous father and son raging against the dying of the light.

We have no real reason to expect a positive outcome. The world has been nearly shorn of life by an unnamed but likely man-caused calamity.

Yet we marvel at the bond between parent and child and their determination to keep "carrying the fire" for as long as they can.

The Road is a horror movie - cannibalism has replaced civilization - but it's an uncommonly smart and deep one. There's an Old Testament directness to McCarthy's prose, which screenwriter Joe Penhall has faithfully adapted, and also a Biblical sense of rough justice: what man has sown, so must he reap.

The story picks up from the sheriff's surreal dream in McCarthy's previous novel, No Country for Old Men, which the Coen Bros. parlayed into an unlikely box-office and Oscar hit. Recall what another lawman had told the sheriff earlier in the tale: "You can't stop what's coming; that's vanity."

What was coming in No Country has fully arrived in The Road. Watching it, I am reminded of Georges Franju's Thomas the Impostor, set in a devastated France during World War I, and the famous scene in which a white horse tears across a ruined landscape, its mane and tail ablaze. Yet The Road is even more fearsome, because it contains no life even as vivid as that terrified animal, just humans grimly attempting to carry on.

But why do they bother? A prologue with Charlize Theron as the practical wife sets up the them-or-us scenario: either you choose suicide or you choose to be raped and then eaten by the cannibal gangs that roam the darkness.

She has made her choice. The father and son are now making theirs, which involves heading south to escape the constant cold and possibly to find signs of restoration.

There's a hint the father lacked resolve early in the slow-moving devastation, but that has been replaced by steely determination to protect his son at all costs. He carries a pistol loaded with two bullets. Choice No. 1 still remains, if it comes to that. There are other people on the road, including an old tramp played by an almost unreadable Robert Duvall, and no one can be trusted.

It's instructive to see what can be done with a few well-designed scenes, including one in a remote house that is straight out of the horror handbook. On a budget that was a fraction of the king's ransom paid to make Roland Emmerich's apocalyptic cartoon 2012, Hillcoat and cinematographer Javier Aguirresarobe have conjured much more fearsome vistas of devastation, all the more so for their unseen cause.

A movie this austere, like a stage play by Samuel Beckett or Thornton Wilder, demands much of its actors. American journeyman Mortensen and Australian newcomer Smit-McPhee are more than up to the task, delivering award-worthy performances as flawed yet redeemable humans.

That Mortensen and Smit-McPhee are required to be on the screen for almost all of the film's 110-minute running time is further testament to their talent and to their ability to convincingly portray a father and son coping with crisis. Making this movie was as demanding physically as it was mentally.

By degree, the trudging pair realizes that the task is not so much one of survival, but of proving that even in the midst of the most terrible of conditions, humanity and love must prevail. If there's a message to The Road, never a sure thing with McCarthy's scorched intellect, this is surely it.
Top of this page
Last edited: 10 June 2010 14:21:15