The Lord of the Rings

The Lord of the Rings Reviews 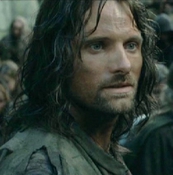 The Lord of the Rings Reviews

Mortensen, in the film's best performance, brings heroic stature to Aragorn, befitting a man descended from kings. Aragorn's conflict with Boromir, given haunting complexity by Bean, strikes at the essence of brotherhood and roots the film in emotion. It's emotion that makes Fellowship stick hard in the memory.

Two of the most passionate performances come from Viggo Mortensen as the courageous Aragorn and Sean Bean as the conflicted warrior Boromir.

The casting, however, could not have been better. Wood is perfect as Frodo, the vulnerable, slightly weedy central figure whose resolve will no doubt grow with the films, while Billy Boyd and Sean Astin nearly steal the picture as the accident prone comic relief. Nearly, but not quite. That is left to Viggo Mortensen as mysterious warrior Aragorn.

Brooding, intense, and handy with a blade, Mortensen is the film's greatest strength - Han Solo to Wood's Luke Skywalker.

Viggo Mortensen, I predict, will become a heart-throb after his romantic and brooding turn as heroic warrior Aragorn. And Sean Bean acquits himself well as the rugged Boromir, a role that requires him to do far more than just swing a sword.

The biggest impression, though, comes from one of the lesser-known players: Viggo Mortensen stuns as the tormented, destiny-shucking warrior Aragorn, exuding a bravery that will make men admire him and an intensity that will make women want to hop into his leather jerkin. (Let's just hope he doesn't inspire a resurgence in Renaissance Faire fashion.)

Eventually his friends are joined by a motley assortment of races who form a fellowship to protect Frodo -- the warrior Aragorn (Viggo Mortensen in a star-making performance), the brave but all-too-human Boromir (Sean Bean), the blustering dwarf Gimli (John Rhys-Davies) and the elf Legolas (Orlando Bloom).

The real champ of the film, even over Sir Ian... is Viggo Mortensen. He's light years away from his role in the third "Texas Chainsaw" film here, as the enigmatic but absolutely BAD ASS ranger known as Aragorn. Picture Han Solo without the wisecracks mixed with and Indian scout mixed with Sir Lancelot stirred together with the leadership and loyalty of a leader we all wish we had. In the dictionary under the term "Star making performance" there should be a photo of Viggo as Aragorn. The only thing keeping him from becoming the next HUGE leading man is if he decides he doesn't want to be. Women will love him and men will too. To top it off, he has a terrific (but brief) scene of incredible romance.

As Aragorn, Viggo Mortensen's weathered face brings his character an intensity and life that the book's extensive backgrounding never did; his threadbare regality is more eloquent than any exposition.

McKellen and Mortensen are the stand-outs of a uniformly fine cast in "Towers," reclaiming the old-fashioned concept of heroism without self-doubt or second thoughts.

... "Towers" primarily belongs to Viggo Mortensen's roguishly dashing Aragorn, the wandering warrior and heir of the kingdom of Gondor, whose physical and emotional strength is tested throughout the story. With the minions of the Dark Lord Sauron on the rampage and the fate of Middle Earth hanging by a thread, there's not much time for romance in "Towers," but the action does pause momentarily so that Jackson can illustrate, in a sequence that's both gorgeous and shocking, the outcome of the affair between the human Aragorn and the elf princess Arwen (Liv Tyler), who is doomed to be eternally youthful.

With "Lord of the Rings: The Two Towers," it's clear that director Peter Jackson has tilted the balance decisively against the hobbits and in favor of the traditional action heroes of the Tolkien trilogy. The star is now clearly Aragorn (Viggo Mortensen).

The cast do well not to be swamped by the spectacle. Mortensen again excels as the square-jawed hero, while Rhys-Davies' dwarf provides welcome comic relief.

In addition to Jackson's stellar direction, praise for each and every actor in this film is handsomely due. Viggo Mortensen as Aragorn carries himself with the perfect air of strength, compassion, and quiet nobility that you expect from someone who you would be willing to follow into battle.

The cast, as in Fellowship, is smartly assembled and compellingly creates a universe the audience can believe in. Mortensen as much mobilizes this cast of thousands externally as he does within the narrative, and plays the true-hearted hero with enough gravity to make Aragon believable without slipping into parody Prince Valiant clichés.

This film focuses on Aragorn's character considerably more than anyone else, but that's not a bad thing: Viggo Mortensen is a terrific actor and the progression of this character is the most engaging part of this picture.

Viggo Mortensen brings the magnetism of an anti-hero to Aragorn, the wandering outcast king.

Viggo Mortensen gives Aragorn his fullest opportunity to be seen as a three-dimensional hero.

It's crucial that the film, like the journeys it narrates, is straggly. I spent the duller sections thinking about how flaxen-haired Legolas looks like a Milky Bar hippy as he pings his egg-slicer-strong arrows at the barbarous monsters. I also drifted off looking at Viggo Mortensen: has a more virile, dynamic actor ever appeared on the silver screen?

The quality of the acting is amazingly high, especially if you contrast it with the woodenness we have become resigned to in the Star Wars films. Viggo Mortensen as Aragorn easily dons the mantle of epic hero that used to be worn by Charlton Heston, and he's a lot sexier.

A few of the characters seem even richer, more profound than Tolkien's own conception. Viggo Mortensen finds an astonishing stillness and poise at the heart of Aragorn (he's a bit of a stiff in the novel). This deep love of peace is what drives him to fight, a paradox which makes him more kinglike than any other character. In brief divergence from the book, he's reunited, in memory or dream, with Arwen (is Liv Tyler's spade-like face actually getting longer with each instalment?). This lovely interlude softens the character, redresses an awkwardness in Tolkien, and breaks up the relentless militarism.

Aragorn has the slinky swagger and dreamy stubble that make him look like a legend created by Tolkien, Sam Shepard and Ralph Lauren. Fortunately Mr. Mortensen also has a touch of modesty as an actor, which allows him to take up space as if he belongs in the center of the frame rather than battling the other performers for it.

This is Return of the King though, and Viggo is that king. Throughout all three films, this has been a journey of responsibility for Aragorn as he grows to accept the destiny for which he was born. Viggo is noble, Viggo is powerful, Viggo is resplendent. He's a young Sean Connery but with a grittier style. More than anyone else, this is Aragorn's film.

And Viggo Mortensen takes his final step towards stardom with his humanely commanding performance as the previously reluctant royalty who learns to assume his responsibilities...and then some. (Jackson must be thanking his lucky stars that Mortensen was able to step into the role a few years back...at the very last minute.)

As the capstone to one of the single greatest achievements of modern motion-picture history, The Return of the King is generally peerless - Viggo Mortensen's Aragorn, the King of the title, is inescapably Shakespearean in the meaty thrust and parry of his role...

Aragorn has long struggled with his own belief that he might not be the one to become the next king. The dashing Mortensen never lets his audience down in his representation of this rugged warrior, a leader of men who endure one battle after another, testing not only their valor but also their very existence.

Meanwhile, Aragorn (Viggo Mortensen), the true heir to the throne of Gondor, rides to the aid of Gandalf, accompanied by the elf, Legolas (Orlando Bloom), and the dwarf, Gimli (John Rhys-Davies). Subtly, Mortensen suggests that gradually Aragorn is growing into the stature of a king. The scene in which he walks into a cave filled with evil spirits, all of them transparent and angry, is dramatically and technically brilliant, a metaphor made real.

The king who returns in "The Return of the King" is Aragorn (Viggo Mortensen), the Ranger originally known to the hobbits as Strider, but of the royal line dating back to the first war against Sauron, in which the One Ring was taken and lost. The character of Strider/Aragorn grows in stature as the books go along, from a stout-hearted vagabond to a great leader in battle, to (finally) the noble monarch born to rule wisely and well. Mortensen's performance follows that same arc; given the time and space by Jackson to build his character in all its nuance, he becomes Aragorn to the life.

Warrior Aragorn (Viggo Mortensen) had lost his love Arwen (Liv Tyler), who would soon leave Middle-earth forever with her father and the other elves. Even burdened with this loss, Aragorn, played with a fine sense of reserve and focus by Mortensen, was ever growing as a leader.

Jackson inexplicably fails to show us that moment when the spark of kingship first lights in Aragorn's eyes. We know Mortensen can play it -- he's artful at blending heroism and humanity -- but the moment seems to happen offscreen.