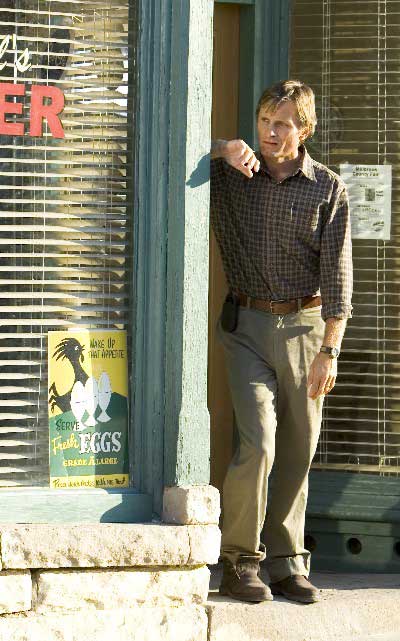 © New Line Productions Inc.
At his best, director David Cronenberg is an artist who teeters between worlds - the light and dark sides of human behaviour. What makes his films so exciting is how far he's willing to go, without flinching. He isn't afraid to "go there", and he takes those who dare to tread with him. In his latest masterpiece, A History of Violence, Cronenberg once again delves into the dual identity territory and presents more questions than answers.

An ordinary American couple with two kids is making their lives work in a small town in Indiana. Tom Stall (Viggo Mortensen in a career performance) runs the town's diner, and has built a loving, still passionate relationship with his lovely wife Edie (Maria Bello) and the two have raised one teenage son Jack (Ashton Holmes) and a little girl Sarah (Heidi Hayes). Their lives are ordinary, for the most part (they have to be the best looking people in that small town but in movies we try to ignore the obvious) until violence rears its ugly head.

But the story, written by Josh Olsen from a graphic novel by John Wagner and Vince Locke, doesn't begin there - the story begins with violence. Two criminals going about their own daily lives, which happen to involve murder and mayhem of the most brutal kind - a way of life for them, rendering them bereft of the things that matter - love, companionship, trust, the precious things violence obliterates with the pull of a trigger.

These criminals find their way into Tom's diner. They have no interest in anything but violating the customers, stealing their money, and eventually killing them. But unfortunately for them, they walked into the wrong diner. With a few shrewd moves, Tom takes them out. He's saved the day - good has triumphed over evil.

Tom becomes a hero - suddenly famous, with television cameras capturing his mug for all of America to see. The problem is, someone recognizes him. Or thinks he does. And before long, Tom is visited by members of the Irish mob.

From there, it becomes a guessing game - could this same man, this gentle, loving husband and father, be a reformed ruthless killer? Even his wife doesn't know for sure. Whether he is or not is beside the point - men want him dead, for whatever reason, and he'll do anything to protect his family.

Mortensen needed to be good enough to keep the audience wondering who he really was. With his aqua blue eyes and chiselled jaw, he is every bit the American film hero - a Harrison Ford or a John Wayne, but with a darkness lurking beneath.

As his wife, Bello gives a powerful, devastating portrayal of a woman who must hold it together as her world falls apart. Though Bello appears to be cut from the cloth of those actresses who can only play hookers and waitresses, she shows another side of herself here - strong and fiery, for once, a woman who doesn't need rescuing.

A History of Violence explores the idea of how violence affects us when we let it in. How a past can chase you down and remind you who you really are - and how impossible it is to become someone new.

What makes this film something other than an exploration of violence are the wonderful moments Cronenberg uses to help tell his story; he didn't set out to make a conventional thriller, but rather one of fear and paranoia, the kind Hitchcock made where a man is trapped and must find a way out. When all is taken from them, what do they have to hold on to? What they have underneath it all - flesh and blood and bone - are physical ties to one another. The man and the wife are bonded by more than their wedding bands - they love each other through all of the layers. The children are theirs, for better or worse.

A History of Violence is a slow burn, one that hides all of its cards until the very end - top to bottom, it is a well-acted, carefully plotted drama that will no doubt hold its place in cinema history and is Cronenberg's best in a good, long while. As for Mr. Mortensen, his whole career seems to have been a set-up for this moment where he finally comes into his own and claims his own place among the best actors of his generation.