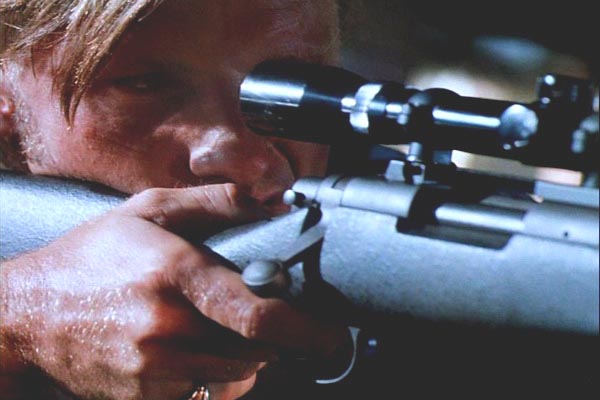 © Overseas Film Group.
American Yakuza is a movie that Viggo Mortensen starred in long before Peter Jackson cast him as the iconic Aragorn in the Lord of the Rings trilogy, finally establishing him as a bankable leading man. Viggo had been knocking around Hollywood for quite a while, building a career as a respected character actor.

Viggo's resume boasted a number of hits (Crimson Tide, Daylight, Carlito's Way) as well as some misses (GI Jane, A Perfect Murder) but he was always watchable. He also had some prominent roles in smaller films, such as Young Americans and Boiling Point, opposite a then up-and-coming Wesley Snipes. More importantly, he had the starring role in a little Actioner called American Yakuza.

We action fans are well acquainted with the genre of movies where an American is juxtaposed into an exotic, Far Eastern martial arts culture and, after some personal hardships and introspection, not forgetting the all-important training montage, end up being the best at what that culture has to offer. Throughout the late 80's and early 90's the lower shelves of video stores were subjected to American Ninjas, American Kickboxers, American Samurai, Americal Shoalin Monks, and now, on the face of it, American Yakuza. American Triad must surely have been just around the corner. The thing is, despite it's rather dumb title, American Yakuza was in a class of its own.

Viggo stars as Nick Davis, an ex-con working in a warehouse owned by a yakuza boss called Shuji Sowamoto, who is involved in a covert turf war with Mafioso Dino Campanela (Michael Nouri). At the start of the movie, Dino's men raid the warehouse, intent on killing Shuji. Nick intervenes, saving Shuji's life. After arranging for a backstreet doctor to tend to his wounds, Nick makes a call to Shuji's people who come and pick him up. Shuji is indebted to Nick and invites him to work for him directly. This upsets a lot of Shuji's men, who are suspicious of the newcomer.

As it turns out, they are right to be suspicious, as Nick is in fact David Brandt, a deep cover FBI agent who's mission has been to infiltrate the Yakuza's ranks. Unfortunately for the FBI, Nick/David has been undercover for so long that he's unsure which way is up anymore, and his ties to his new "family" are pulling a lot more strongly than those to the FBI, where his superiors are more interested in their own political agenda.

Things come to a head when the FBI, in the spirit of "better the devil you know", makes a deal with Campanela, more or less assisting his bloody takeover of Shuji's empire. Nick finds himself "off the case" but his loyalties are conflicted by his blood-ties to Shuji.

The movie is admittedly a little heavy handed in it's sympathies with the yakuza - not surprising as the movie is rumoured to have been financed with Yakuza funds. It wears its cultural references in a much more dignified manner though than the lurid, Mondo-esque approach of Showdown in Little Tokyo (another classic to be reviewed shortly).

I'd recommend this movie to anyone interested in seeing a younger shirtless Viggo, as well as some nicely choreographed action. The rest of the cast is also excellent. Ryo Ishibashi played the unfortunate film producer in Audition, and Michael Nouri starred in another film which will be featured here shortly, The Hidden.

KEY SCENE: Here's an example of what makes this movie stand out:

The first job that Shuji gives Nick is to provide sniper cover while Shuji confronts Campanela to see if he was behind the warehouse attack. From the back of a limo, Nick keeps Campanela in his sights. The scene cuts back and forth between Shuji and Campanela and Nick watching them through his rifle 'scope. Campanela is vehemently denying involvement, but Nick can't hear the conversation, and must rely on body language. This is made more difficult because Campanela's body language is very aggressive, and at least once Nick steels himself to shoot.

However, unbeknownst to Nick, he in turn is being watched very intently by Shuji's chauffeur. When Shuji returns, and Nick asks what he had found out, there is an almost imperceptible communication between Shuji and his driver - a quick look, a slight nod - which Shuji takes a moment to digest before replying. He now knows that he can trust Nick, that he was indeed covering his every move, and Shuji is satisfied to continue confiding in Nick. It's a nice scene, which shows that Shuji isn't gullible, wanting to test Nick's character.