Source: Time Out (Sydney)
The actor/poet/artist/musician talks to Time Out about nookie with Nazis and how two Aussies 25 years apart became lords of his career ring 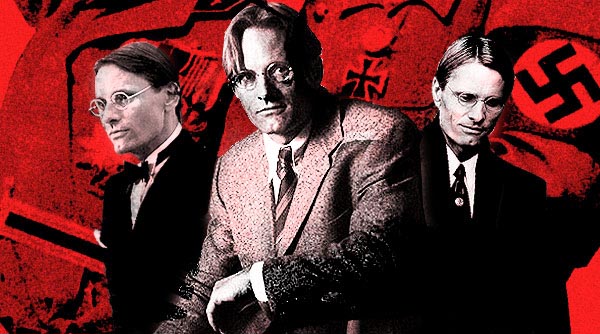 Days before we shot it, the director [Vicente Amorim] hesitated as to whether it was necessary. I had to say: "Absolutely it is!" [laughs] I don't mean that in a perverted way. The truth is many people were turned on by Nazism, while another part of the population was uneasy but went along with it anyway. That's why the scene is symbolic. He looks in the mirror and sees her sexualising the uniform and knows there's something very wrong here... but like most men in that position, he makes the decision to deal with it tomorrow.

First came Tom Cruise in Valkyrie, now there's Good and, out on August 20, is Tarantino's Inglourious Basterds - are Nazis making a comeback in the cinema?

Nazism should never be turned into a comic strip, but I think it's possible to use a sense of humour about an extraordinary period in world history. Certainly, there's incredible stigma attached to Nazism. Even though we shot Good in Budapest we still had signs everywhere explaining that the banners were just part of a movie. I even heard about a guy being arrested for doing a vaguely Nazi salute style of goodbye wave to a friend!

Beyond playing a Nazi, you've also been a truck driver, dock-worker, flower seller, translator, waiter and bartender. Did those jobs help your acting?

A lot of those jobs, particularly the factory work, were physically hard and mind numbing. But having that background of menial jobs and manual labour gave me an appreciation for the people who show up to a film set before I do, leave after I do and only get paid a fraction of what I do.

Your big break came on Aussie director Peter Weir's 1985 film Witness. Is it true you gave up two months as Hamlet in New York's Central Park for two days on set?

True, and it's proof of how randomly things can happen for an actor. I ended up staying six weeks! Peter wandered over one day and said "Unless you're busy, we'd like you to hang around." I did and it was invaluable. I went to the rushes, worked with the team, worked one day a week and spent the rest riding an old bicycle through the countryside.

And it was a really good experience. Kodi is only 12 but instinctively acting comes very easy to him. He's incredibly talented without being arrogant about it. We wandered around Pennsylvania together, went to baseball games, saw heavy metal bands and I explained to him the rituals of Catholicism and confession. He said: "So you confess, then you go and do more bad stuff, and then you say 'Sorry!' again?" He got it alright!

Your ex is Exene Cervenka from punk band X and you've cut albums yourself...

Writing or acting or playing music, I need to feel like I'm connecting with something. And although acting brings me many moments like that I'm probably most relaxed sitting down at a piano. I don't read music and I've never had lessons but it's fun and I find it very relaxing. I'm okay with mistakes and people not liking what I play. I just do it.

Your aunt says: "Your last suit doesn't have any pockets." What does it mean?

It means you can't take it with you, so seize the moment. It means if you have an instinct to say something, say it. If you feel an urge, act on it. Don't penny pinch, don't skimp on healthcare, lash out on a nice dinner occasionally. Just say 'Fuck it' and don't worry.

What's the most important ingredient to being good?

The truth. Those awkward times in our life are usually the most genuine. And one thing I've learned in life is that unguarded moments are very often the most truthful of all.