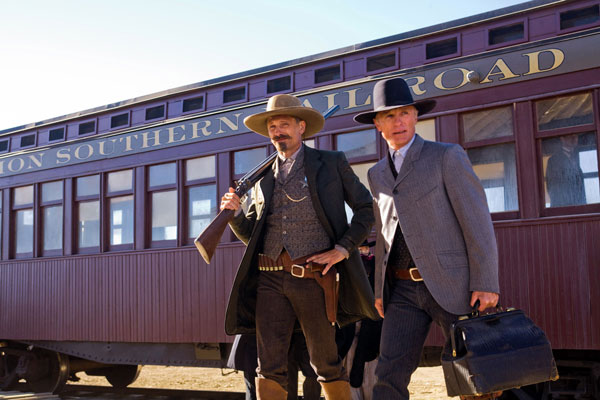 © New Line Cinema/Warner Brothers.
If you're looking for a revisionist take, a thick slice of irony or hidden meaning, Appaloosa is not the Western for you.

The film, which Ed Harris co-wrote, directs and stars in, is old-school, from its 10-gallon hat to its spurs - and all the better for it. It's as if Harris defied convention by being conventional.

Based on the novel by Robert Parker, Appaloosa is perfectly content to let the good guys be good, the bad guys be bad and leave it at that. Harris plays Virgil Cole - even the name screams movie-star cowboy. He's a legendary hired gun, a straight shooter in just about every sense possible. His partner, Everett Hitch (Viggo Mortensen), is perhaps equally adept at gunplay. But, as Cole notes, he suffers from a potentially debilitating malady: He has feelings.

That's not a problem for Cole. At least not until Allison French (Renée Zellweger) pulls into town. Distractions of that sort - the complicated Allison is nothing if not a distraction - might not be such a serious matter in some cases. But things in Appaloosa have become serious, indeed.

That's because Randall Bragg (Jeremy Irons) and his gang have basically taken over Appaloosa, killing the sheriff and scaring the town fathers enough that they give Cole unlimited authority to regain control. It's power that Cole does not hesitate to exercise, whether with his warnings or, if need be, his gun.

That a showdown between Cole and Bragg is looming is, of course, no surprise. But the path to it is somewhat unexpected and complicated considerably by Allison, which prevents the film from falling into a cookie-cutter trap. Allison's presence ensures that Cole will have to make uncomfortable decisions; Cole's demeanor and sense of honor ensure that he will do what he thinks is right at the expense of everything else.

Almost no traditional facet of the Western is left unexplored. A vintage courtroom scene with a crusty old hanging judge (Bob Harris), a daring escape, trouble with Native Americans and a double-cross or two all make their way into the story. As does, of course, a shootout. (More than one, actually.)

The film looks great, with lots of wide-open spaces surrounding a dusty little town. And although there's plenty of violence, Harris wisely remembers that the actual business of a shootout doesn't take long (especially when, as he notes to Hitch, everyone can shoot). Thus, much of the film takes place between duels and such.

What keeps that from becoming a boring meditation on watching tumbleweeds tumble by is the relationship between Cole and Hitch, who often muse about their lives and where they're leading, and, more specifically, the performances by Harris and Mortensen.

Cole is cold, distant - can't allow feelings to get in the way, remember - and utterly devoted to the task at hand, which is settling down Appaloosa. Hitch, meanwhile, is more naturally curious, more willing to let his mind wander as he ponders his place in the universe. He sees shades of gray where Cole sees only black and white. Not many shades, mind you, but Cole is so single-minded of purpose that, over time, the difference proves striking.

Harris is quite good as Cole - if you want the steely-eyed man of few words, he's your man - but Mortensen is outstanding as Hitch. For one thing, with his thick goatee and sharp features, he looks fascinating. That's important because his use of expressions and reactions are essential to understanding him.

Zellweger is less effective as Allison, though it's not entirely her fault. In such a deliberately paced film, things move too fast with her, making her character's relationship to the goings-on somewhat off-kilter (and she's not an interesting-enough actress to make up for it). Meanwhile, Irons has a ball overplaying Bragg as a gentrified killer. Why he doesn't have a long mustache to twirl is anyone's guess.

Ambition is a great quality in a filmmaker, especially when it's realized. Yet there is something to be said for just telling a story, and with Appaloosa, Harris does a fine job of it.
Top of this page
Last edited: 14 January 2009 15:46:10