"Appaloosa" - Polished In The Grand Old Way Of Westerns 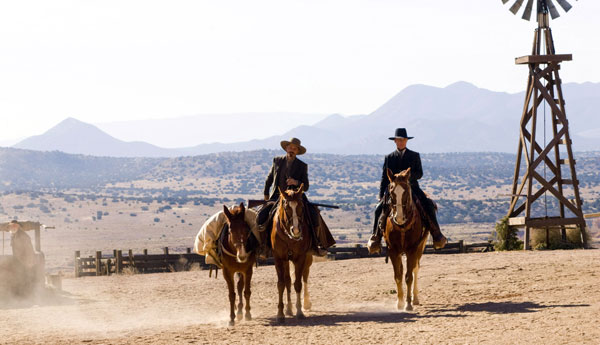 © New Line Cinema/Warner Brothers.
You know everything is gonna be all right when the first sight we catch hold of is Ed Harris riding into town all decked out in undertaker black. Harris, all pale moonlight skin and Arizona sky blue eyes, is Virgil Cole, a boy grown to manhood with a gun at his hip and a clean shirt for every week.

At his side is Everett Hitch, (Viggo Mortensen) a once upon a time soldier who, in the middle distance of his life, teamed up with Cole to make a living ridding the western planet of bad guys. Everett, all garbed out in old army clothes, leather and a fine shooting coat gives us a death maker with a West Point vocabulary and a Henry Fonda haircut right out of My Darling Clementine, once the greatest western ever made.

These two men, whose souls have grown together over the years, have come to the place in life where they finish each other's thoughts before they become sentences. A deep love passes between them, but as the great John Belushi used to say, "In a manly way."

Everett and Virgil have come to Appaloosa, N.M., a graveyard with oil lamps, struggling to become a town. They are here to take up an offer from the town fathers: to rid the earth of a complicated villain, once a Washington D.C. dandy and political manipulator, now a land baron who heads up a posse of uglies. This would be Randall Bragg, played by that supremely fine Brit, Jeremy Irons. Irons' Bragg is a finely wrought piece of degeneracy who lives out in the boonies, but whom we suspect uses fine silver to dine.

Our boys make a deal, forcing the town fathers to give them control of the town so they can make laws and enforce them without needless chit chat.

Appaloosa, when boiled down to a fine dish, is a paella of Butch Cassidy and Sundance, Wyatt Earp and Jesse James, and any other gunsters you can cull from the great American library of saddle heroes.

You can see dollops of Henry Fonda and Jimmy Stewart, Clark Gable and Spencer Tracy, eating the dust once kicked up by John Ford and Howard Hawks. And of course, from scene one, when you see two bonded heroes, you know there's gonna be a lady fair, a Myrna Loy, Lana Turner or Maureen O'Hara, and sure as saddle blankets, one comes along, chuggin' into town on the three o'clock train from the east. That would be Renee Zellweger as Allison French, who has come west to seek her fortune as a hotel piano player. Say what? Don't count on it. Of course you can count on her winning over the stoic Virgil Cole and giving Everett impure thoughts. We soon learn that Allison may have Deborah Kerr manners, but there's a Barbara Stanwyck floating around under that school marm get up.

Appaloosa is what you want when you order dust and blood to go. It's polished in the grand old way of westerns, giving us quiet men who do harm in the name of good and evil, and women who enchant and confuse the basic rhythms of those men.

Harris wrote the script directly from Robert B. Parker's novel, with the aid of Robert Knott. Harris also directed and did a fine job of it. He clearly grew up as we all did with the sage brush bravado of Ford, Hawks, Peckinpah and certainly Clint Eastwood. It is a popcorn movie for chewers who think, for those who were there when Stagecoach opened, and for the very young who long for something that doesn't take batteries to operate. Westerns are America's art form, and Harris has painted a canvas suitable for elegant framing.
Top of this page
Last edited: 13 January 2009 15:20:19