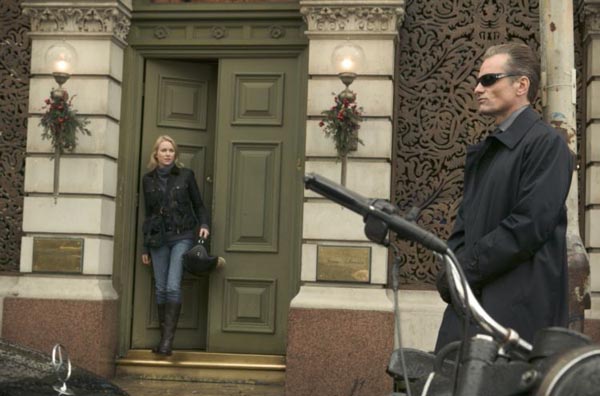 But in an industry in which directors can't seem to bring in a picture at a reasonable length, Cronenberg's Eastern Promises feels tantalizingly too short.

It's both brutally violent and breathtakingly human. It's a crime thriller, yes, but through Cronenberg's peculiar perspective, working from a script by Steve Wright, it's never standard or obvious. In claustrophobic settings both bleak and garishly opulent, the film holds you in an increasingly tight grip and then it just ... ends, clipped suddenly, leaving you longing for more.

Until the last possible second, though, Viggo Mortensen coolly dominates as a driver for a Russian crime family who would be getting his hands dirty carrying out extra duties for them if he weren't wearing black leather gloves. He plays a sort of mirror image of his character in Cronenberg's A History of Violence: Through subtle expressions and an understated delivery, he's a dangerous man capable of unexpected flashes of decency. And while he's a physical specimen to behold -- and we get to behold all of him in a much ballyhooed nude bathhouse brawl -- it's his interior transformation that's far more impressive.

Tattooed, sinewy and slickly dressed, speaking thickly accented English (as well as solid Russian), Mortensen's Nikolai is obviously someone to fear but also a source of understandable fascination for naive British midwife Anna (a vibrant Naomi Watts), who crosses his path while looking for the family of a teenage prostitute who died while giving birth in her care.

Fourteen-year-old Tatiana left behind a diary, which Anna can't read despite being half-Russian on her late father's side. Living back at home with her mother (Sinead Cusack) after a bad breakup, she gives the diary to her drunk, surly uncle Stepan (Jerzy Skolimowski) to translate, but he's initially reluctant to learn a dead girl's secrets.

But inside the book is a business card for the upscale restaurant, where Anna turns up one day, hoping to find answers. Instead she finds Semyon (the formidable Armin Mueller-Stahl), the kind, elderly proprietor who has gourmet tastes and seems like a gentle soul but is actually a crime boss in the Vory V Zakone brotherhood, for which the restaurant is a front.

He's only too glad to help Anna and, innocently, she makes a copy of the diary for him to read. Each time she returns to the restaurant, though, she runs into the handsome, mysterious Nikolai, a man of few words to whom she nonetheless finds herself perversely drawn. She also has several unpleasant encounters with Kirill (the giddily off-kilter Vincent Cassel), Semyon's volatile son and enforcer who has an inordinately strong connection to Nikolai.

And so the doomed Tatiana's story unfolds in voiceover as two old-school Russian men learn her secrets simultaneously. There were drugs and beatings and rapes, and promises of a better life that never materialized (Knight explores some of the same themes of misplaced immigrant optimism as in his Oscar-nominated screenplay for Dirty Pretty Things).

Eventually, by asking the right questions of the wrong people, Anna finds herself in as much danger as the girl whose baby she's trying to save. Cronenberg steadily ratchets up the tension (with help from Howard Shore's score) and there are moments so raw and intense you'll find yourself inclined to turn away -- and yet, like Anna, find that you cannot.
Top of this page
Last edited: 13 November 2007 14:21:54