Another History of Violence 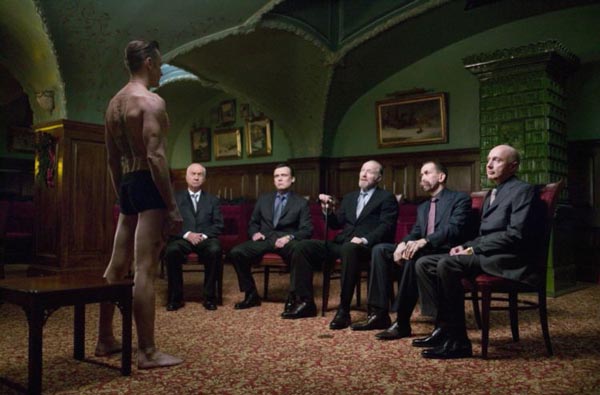 © Focus Features.
Despite his history of making violent films, director David Cronenberg is a mild-mannered guy. Sitting at a roundtable discussion in a hotel suite to talk about his latest venture, Eastern Promises, which premiered at the Toronto International Film Festival earlier this month, he looks like someone you'd meet at a classical music concert. His gray hair is gently slicked back, and he's wearing an unpretentious black blazer and jeans.

Eastern Promises' cast members all talk about what a gracious and down-to-earth guy he is. Naomi Watts says she was "surprised by his lightness and humor and openness" and calls him a "brave filmmaker." Viggo Mortensen describes him as "a real artist" and says he's "ahead of his time." And yet, if you were to make judgments about Cronenberg's character from watching his movies, which often deal in deviant topics, you'd think he was some kind of sociopath.

"I remember Martin Scorsese told me he was nervous to meet me because he had seen Shivers and Rabid and they terrified him," Cronenberg recalls, citing two of his earliest movies that delved into horror and sci-fi. "I thought, "The guy who made Taxi Driver is nervous about meeting me?' In fact, the relationship between an artist and his work is very complex. Sometimes, I suppose you could be a psychotic who makes psychotic work. But it's not that simple. I mean, we all know that comedians are the most hideous, depressed people. They're not funny at all in person. So there's not a one-to-one relationship."

Mortensen can certainly attest to the benefits of working with a 30-year vet like Cronenberg. The actor received accolades for his role as a quiet man with a troubled past in Cronenberg's last film, A History of Violence. And in Eastern Promises, he plays another disturbed character, Russian-born Nikolai Luzhin, a driver for a London mob boss. Nikolai finds himself immersed in a world of illegal activity and struggles with his allegiances when he encounters an attractive hospital nurse (Watts) who's linked the death of a pregnant woman to his boss Semyon (Armin Mueller-Stahl). Though the role was a difficult one that found Mortensen spending months in Russia working on his accent and learning about the Russian underground, the chance to work again with Cronenberg made it all worthwhile.

"Going [to Russia] and seeing people on the subways and buses gave me something very specific to work with," says Mortensen, who even studied the meanings of the tattoos you often find on Russian criminals. "I was glad to hear a Russian journalist tell me it sounded like I was from the area I was supposed to be from. It's not just about doing good research. David [Cronenberg] knows this, too. You learn 100 bits of information and maybe only use 20. But it's all for the story."

Written by Steve Knight (Dirty Pretty Things), the movie, which commences with a grisly scene in which a mobster gets his throat slit, is often violent and delves into sexual deviance, too. In one scene, Nikolai is attacked by a pair of Russian killers in a bathhouse and ends up in a bloody knife fight. Mortensen did the entire scene in the nude, and in some instances, his naked, bleeding body is hurled across the cement floor.

"Physically, it was painful because I had to do it without any pads," he says matter-of-factly. "It was somewhat awkward, and I felt vulnerable at first, but once we got into it, it was just like any other scene and we just tried to make it consistent and believable."

And while there is another equally disturbing scene that takes place at a brothel, Mortensen maintains the movie doesn't glorify sex and violence.

"[Cronenberg] is more responsible than other directors in terms of the depiction of violence, even with the slashing and all the things that seem so gratuitous," he says. "But I don't see Eastern Promises as a movie about violence. As much as anything, it's about compassion and having a code of ethics."
Top of this page
Last edited: 19 September 2007 14:09:15