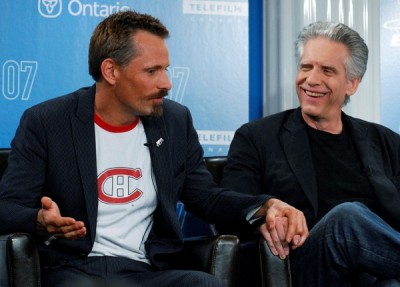 Eastern Promises Press Conference - TIFF: 9-8-07.
© AP.
Viggo Mortensen is on his knees. He's naked, exposed, bleeding profusely and covered in tattoos. It's overwhelmingly hot in the London steam bath. It must be fogging his mind and dulling his senses, but he can't rest, despite the blood that seeps from gashes in his flesh. There are two hulking enemies advancing on him, determined to finish him off.

It is a Canadian director - David Cronenberg - who's brought the silver screen heartthrob, best known to most moviegoers as Aragorn from Lord of the Rings, to this lowly state. The violence Viggo endures and participates in during this gruesome scene in Eastern Promises is the buzz of the Toronto International Film Festival this year.

The 'naked steam bath fight', as it will come to be known, sticks with you long after you leave the theatre. There are other movies with higher death counts, more explosions, more fights. Eastern Promises, however, feels so real it's uncomfortable.

That's kind of the point.

"Violence is the destruction of the human body," says Cronenberg somberly in an interview at the Park Hyatt hotel in Toronto.

Brutality on film is not something the auteur takes lightly. He deals with it on a visceral level in his intense and dark pictures.

Eastern Promises is his second film with Mortensen after History of Violence. It explores Russian organized crime in London, human slavery and an orphaned baby. During filming, Cronenberg had no desire to go the route of stylized action and violence that's seen in pictures such as the Bourne Ultimatum.

When Mortensen takes his turn in front of a small group of reporters (wearing a Montreal Canadiens T-shirt), after Cronenberg, he's prepared to address the bathhouse battle too - nakedness and all.

"Obviously I knew it was going to be physically painful and that it would be somewhat awkward and I'd feel vulnerable...but we were just trying to make it consistent and believable," he says.

Mortensen journeyed to Russia, listened to the language and investigated tattoos his character would have sported. It was all part of his mission to support the director's vision of making Eastern Promises as realistic as possible.

Co-star Naomi Watts tapped into her pregnancy to get in touch with her mid-wife alter-ego.

Both actors were determined to make the audience fall under the spell of Eastern Promises, even if it meant getting a little beat up, or ignoring the more glamorous side of movie making.

"My job is to help make the story more truthful, so if I'm trying to be Naomi and look my best...that my hair is primped the right way...my lips are glossy...you're out of the movie, we're out of the story," Watts says.

It is her admiration of Cronenberg that bolstered her determination to get her role just right.

"He's a very brave filmmaker and that's why I'm drawn to him immediately," she explains.

This time around, Cronenberg displays his bravery by refusing to shy away from brutality, by making his characters seem like real people, by setting his film in a part of London that feels worlds away. He throws a scene at the audience and seems to ask: "This is real, not music video jump-cuts. Can you handle it?"

"The reality is that he takes very seriously any depiction of violence," says Mortensen.

"That's why he shows it honestly, straight-forwardly, not with a bunch of fancy editing or camera work. He just shows you that if there's damage, it's brutal and that there are consequences, physically, emotionally, to any act of violence."

Days after a screening of the movie, images from the steam bath scene still flicker in your mind. It seems that is how Mortensen, the one brought to his knees, feels it should be.