By Jaime Iglesias - translated by Nimthiriel 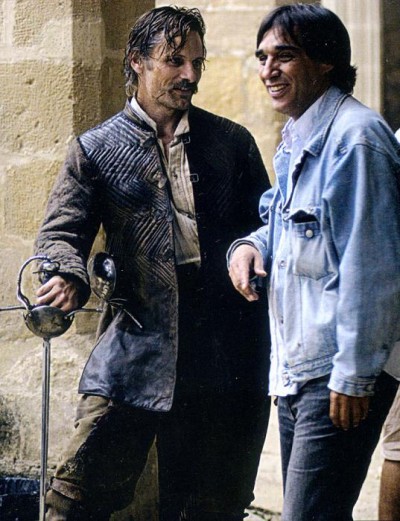 "He wasn't the most honest man, nor the most pious of men, but he was courageous," with these words writer Arturo Perez-Reverte opened more than a decade ago the Captain Alatriste saga, an authentic literary phenomenon in the Spanish speaking world with his sixth book just released, Corsarios de Levante (Levante's Corsairs). Those same words are the ones that close Alatriste, the movie directed by Agustin Diaz Yanes, conceived with the idea of achieving an impact similar to the novels that inspires it, because "we are almost 400 millions of Hispanic-speakers in the world,, and we're still being included into the Anglo-Saxon culture, so the best answer to that is to make movies that stand up to the technical level they have, but at the same time be furiously Hispanic in their content."

In Spain, Alatriste opened on September 1st 2006, beating James Bond, Eragon, Superman and the X-Men, positioning itself as the fourth most viewed movie of 2006, just behind Pirates of the Caribbean 2, The DaVinci Code and Ice Age 2.

When the time came to put together a superproduction like this one, and be able to compete with the big Made in Hollywood productions, the people responsible for the project did not think about expenses, starting with a big A-list star, Viggo Mortensen, still fresh from the memory of The Lord of the Rings' Aragorn.

"We had two names, Viggo Mortensen and Benicio Del Toro," Agustin Diaz Yanes explains, "but the latter barely spoke Spanish, and Viggo showed great enthusiasm for the project, and was very committed from the start. He rejected other offers just to be able to have time to prepare his character; he's a methodic performer, always ready to give himself entirely. He's a luxury as an actor and person. The only condition he made was that we couldn't even consider the option of making this an English-speaking movie just to give it a more international acceptance, but I assured him that was out of the question."

During the press conference before the shooting of the film, Mortensen explained some of the reasons he found the script - which concentrates the five books published at the time - appealing. "It's a very deep story, in it you can find the crumbling of an empire that lost strength and presence due to its war excesses, something that even though it takes place in 17th century Spain, it's also applicable now days", he said in an open reference to the American empire.

Apart from Viggo, they also thought of Gael Garcia Bernal (Babel) for the part of Inigo de Balboa - Alatriste's friend and narrator in the books -, about him the director Diaz Yanes said: "I'm passionate about him as an actor, but he had a very tight agenda and the producers had already changed the start dates lots of times in order to have Viggo, and it was impossible to match them with Gael's dates."

One of the biggest complaints the movie has received is the fact that it concentrates the five novels, instead of making a saga, but this is something that bothers the director: "If we spent 22 million Euros, and it's the biggest film budget ever spent in a Spanish film, is there really someone that thinks we are in a position to start a series of movies whose costs would be over 100 million Euros? That's idle talk..."

And the fact is that, contrary to what we may think, Alatriste's not an action-adventure movie, at least not in the strict sense of the term: "Some say there's very little action in it for an adventure movie," Agustin Diaz Yanes says, "but that's because they don't get our approach. We never attempted to make a Spanish version of Pirates of the Caribbean, the books' background and story have too much depth from the historical and political point of view to make it a cape and sword film." In the same way its leading character is more an anti-hero than a hero, and the movie gives predominance to the story of an empire's fall throughout thirty years of history rather than to its splendour.

We are in the presence of an anti-epic movie, with spectacular sequences, and yes, a dose of royal intrigue, sword fights, and massive use of extras, but where introspection is more important than action itself. It's a suicidal approach that has disappointed more than one spectator, but it's one that at the same time has garnered lots of applause, because what really transcends is the effort of showing the Spanish society that comprised of people like Cervantes, Quevedo or Velazquez, it's major founders, artists that in their works reflected the beginning of decay, the end of the dream, the resigned awakening to the misery of an empire.

Because of all this, Alatriste is much more than a simple movie. It is a passionate journey to the origins of a sentiment in which identity is at last achieved.
Top of this page
Last edited: 25 April 2007 03:28:29