By Diego Santonovich - translated by Margarita

Source: Olé
Viggo Mortensen moves mountains: he delayed his return home to meet with the members of the fan club in Miami that's named after him! Cuervo faith ... 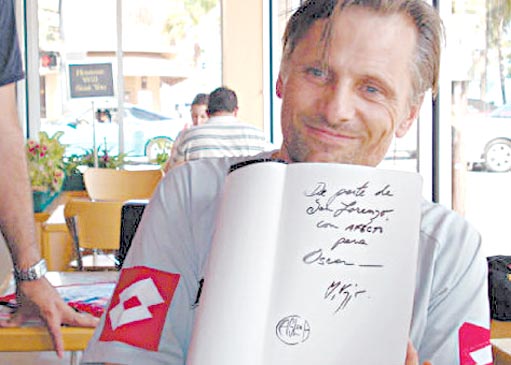 Diaro Olé, April 2007.
© 1998-2007 Diaro Olé - All rights reserved.
Proud of being the only team founded by a priest, the San Lorenzo fans - here and around the world - flourish because of this celestial influence. One example of this is the large number of fan clubs that el Ciclon has around the globe. Another example is the passion it awakes in an internationally famous actor like Viggo Mortensen. Together, those two badges of honor are dynamite. Real dynamite. Or isn't it an explosive display of devotion when, putting his fame aside, the star changes his itinerary solely to meet up with the cuervo fanatics who named their Miami club after him? It's the bomb ...

Not even the San Lorenzo marathon that Viggo lived while in Buenos Aires for more than a week (he came for the premiere of Alatriste, watched the San Lorenzo match against Lanús, wandered the city buying flags and fan merchandise) can extinguish the flame that El Ciclon lights in him. That's why, after 10 days in Argentina, he decided to delay his return to Los Angeles, where he lives, to meet up with the Cuervos from Miami again, who named their club after him!

The thing is that the actor had already met the 12 members of the club, but when he saw them for the first time a couple months back, during the movie festival in the city, he barely got a chance to speak with them. Uncomfortable with not having spent enough quality time with them, he rearranged his itinerary: instead of returning home via Houston, which would have been the fastest route, he rearranged everything in order to be able to have a few hours in Miami with his fellow Cuervos. He chose to travel through Miami so that, during the layover, he could once again greet the members of the club. And not only that: during his last day in Buenos Aires, he himself made sure to stock up on all manner of San Lorenzo items (bracelets, flags, necklaces), wrapping them individually to distribute to each fan.

Who are these fanatics? They're 12 Cuervos who, six months ago, chose the North American actor's name for their club because "of everything he does for el Ciclón around the world; with that humility he has of wearing some San Lorenzo item anywhere, and it doesn't matter if he's got the president of a very important country in front of him or if he's at a Hollywood party," says one of the members of the group.

Ex-plo-sive. If before meeting up with Mortensen again they were surprised by his modesty, there's no accounting for the impression that his last visit left: instead of having them meet him at a hotel or some other place befitting his status, they met up in a fast food joint!!! And they shared mate. It's a uniquely cuervo homily.
Top of this page
Last edited: 12 April 2007 15:38:02