The style of your poetry varies considerably, from very minimalist and spare verse, to the long and complex prose-poems in your recent books. What influences you in your choices of structure and presentation?

"not sure. trees, dreams, doubt, birds, books, rain. have felt comfortable writing in prose style lately. have not had as much time as i did a few years ago to organise and rework poems in anything but paragraphs. that does, however, feel right these days. clean, uncluttered. am just as nit-picky about word choices and structure, but more trusting of the in-built rhythm of word-pictures, prose fragments --not concerned with indicating any kind of preferred reading of a poem. remain self-nagged about not finishing more pieces, as usual, and unsure of what i have managed to complete and put in published print over the last couple of years. forward movement. am glad to have explored my feelings a little through writing when i have had the time to focus--and to have attempted to understand those of other people. will write more consistently once i find the time to apply myself more consistently on a daily basis, as opposed to scribbling sporadically, catch-as-catch-can and reworking the resulting fragments."

When you are designing a book or an exhibition of your own work, where do you start? What guides your decisions on what to include and what to leave out?

"when i paint, i just paint. when i take photos, i just take photos. rarely do i intentionally set out to fulfill a concept as far as a series of pictures might be concerned. there have been times when i have done that, shooting photos from horseback, for example--from the rider's or from the horse's perspective. or making long exposures in certain places or of specific landscapes. i will often choose a particular type of film and camera, knowing that these choices will usually affect the raw exposure that i have to work with, but then i just wait and watch and see what happens. i have shot very little digitally, but have nothing against doing more of it. i do like the vanishing look of grain, flares, accidents that teach me to look closer at what flows past us."

You have said in many interviews that you research your character back to his birth, his beginnings. Why is that important for you to do as an actor?

"makes me comfortable. allows me to dive in with my fellow actors, crew members, see what the day brings. helps me react in character as needed, without much self-doubt."

When you are establishing background and history for your movie characters, how important is it for you to have autonomy or control over the character's physical appearance?

"am always open to director, cinematographer, lighting, costume designer, set design, prop-masters, etc., -- and enjoy a give-and-take with everyone-- especially during preparation and at the start of a shoot. the best film-makers always welcome the actor's contributions, i have found, as long as we are not too obsessive or pushy. making movies is, ideally, a team sport when it works well."

Lord Of The Rings aside, it has been reported that you like to take your time when deciding to commit to a movie project. Can you outline for us the decision making process you go through?

"probably not. obviously like well-written scripts and hope they come my way. have to be lucky. i have learned that a little uncertainty and fear of the unknown are good indicators that there might be something worth learning about. actors do not have as much say as some people seem to think. we need a lot of luck in meeting up with good characters and making good contributions in any shoot. in the end, you can only accept or decline a role if it is offered in the first place." 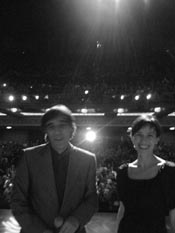 Agustin and Ariadna on stage at Miami Int'l Film ….
© Viggo Mortensen.
When you decide to take an image do you think of composition or perspective...or are you a 'shoot from the hip' kind of guy and just see what develops?

"both. sometimes i have a specific goal in terms of subject and approach, but like to keep options open, and to adapt to circumstances--light, equipment, weather, personalities, etc."

With the advancements in the technology of digital SLRs today, have you ever thought you would try using digital? Why or why not?

"have done a little. will probably do more."

Viggo, you have been an early, consistent, and fierce critic of the policies and motives of the Bush administration, and on occasions you have been equally vocal in challenging the Democrats to vigorously oppose the Bush/Cheney autocracy. What do you see as the greatest challenges facing the American voters both now and in the upcoming 2008 Presidential election? What kind of candidate do you feel can best change the course of the nation as the next President? Is there a current candidate (out of an ever growing field) who you would endorse?

"asking questions and admitting errors, making genuine efforts to make amends for ill-considered or uninformed positions/statements are all valuable qualities for candidates to have as we approach the U.S. elections of 2008. the U.S., however, is less and less the centre of the world. we really need to share the planet honestly, putting the environment and fair consideration of the well-being of future generations at the forefront of our thought process. have not made my pick yet as far as a presidential candidate goes for the U.S. election of 2008."


This interview is the exclusive property of Viggo-Works.

It is our feeling that this interview, while given exclusively to Viggo-Works, was meant for all of Viggo's fans. This interview may therefore be reproduced on all other Viggo fan sites ONLY, with proper copyright credit given in full, and without any further written authorization.

Any other reproduction or reprinting of this interview is prohibited without prior written authorization of Viggo-Works. All requests should be sent to mailto:rivres@viggo-works.com .
Top of this page
Last edited: 9 April 2007 08:21:02
Images © La Sociedad Cultural Casino de Torrevieja, Deryck True, Associated Press, Viggo Mortensen, Ottaway Newspapers, Inc. and Atlas Espana.