Wanted: Spaniards from the 17th Century 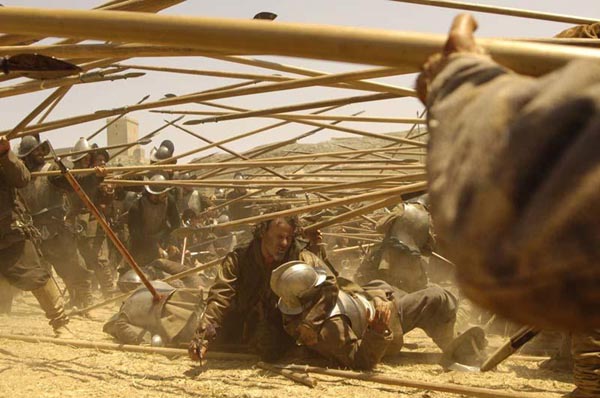 © 20th Century Fox/Estudios Picasso/Origen ….
There's a star. He is Viggo Mortensen. Clustered around this star is the most brilliant and well-rounded cast of actors in Spanish cinema. But Alatriste doesn't fight alone, nor does he live in a deserted city. Even the Flemish and French wouldn't do that, and they're the bad guys. That's why, in the 147 minute film, thousands of nameless extras populate the ancient streets of Madrid, drink in the taverns and give their lives for the Spanish captain or the enemy.

Among the hundreds of people who were in charge of recruiting and coordinating extras during the filming were Hector Rodríguez, from Estella; Iván Muñoz, from Ansoáin, and Álvaro López, from Pamplona.

During the 3 months of filming (March to June 2005), the 3 Spaniards made casting calls, placed each extra in their corresponding location on set and made sure no person lacked anything for their role.

The budget of 24 million Euros, spent on costumes, weapons, military uniforms and movie sets "would impress anybody," assures Rodríguez. And, the best part of all, Viggo Mortensen in person.

"We thought that, as the star, he'd be cold and arrogant," López says, "but he really was just one of us."

"If we needed to remove stones from the road so the horses wouldn't be injured, he pitched in, and, just like the extras, he wore his costume all day long," agrees Muñoz.

"He often brought candy for everybody," remembers Rodríguez. "And on the last day he personally presented each of us with a t-shirt he'd designed himself."

López affirms that he, Mortensen, and a few extras were invited to a Cádiz match by an extra who was a football fan. "The authorities took Viggo to some box seats, but he only put up with it for a few minutes before returning to us. I don't even remember who won the match," says López.

But it wasn't all glamour. "In the battle of Rocroi, which was filmed in June at 104 degrees, the extras filmed in the sun for 12 hours while wearing tight costumes and heavy, authentic armour," says Rodríguez. "When a scene ended, the director's assistants would yell 'Water' and we'd descend en masse upon the set to distribute drinks. Many filmed with ice cubes down their costumes," he says.

As for the patience of the extras, Muñoz notes that "there were some youths who we'd expected to hold out better, but all we got from them were complaints. But there was also a 91 year old man who could barely move but was thrilled with his period clothing."

Rodríguez points out that "we also had homeless individuals who found out that we provided food and paid for extras, so they showed up to try their luck." The three concur that working with them was easy since, "they behaved well and their physical appearance - disheveled and worn - was perfect."

"I want 200 extras for tomorrow." That's the order the casting crew received at 9pm one night after a long day of filming.

"Even today, I'm not quite sure how we found them all," admits López.

Munoz explains that, "We called extras who had already participated and asked them to bring all the friends they could. And, to our surprise, several of the ones we didn't call showed up of their own volition at the bus stop, just in case we needed more people."

In another time crunch, when they needed men with long hair, they recruited individuals, with Polaroid cameras in hand, from Cádiz bars at night.

"The idea was a success, and a lot of people showed up," says Rodríguez.

"But the most delicate matter," according to Muñoz, was when they asked for toothless individuals and amputees whose "stumps we had to cover in blood for the battles."

They resorted to announcements in specialized publications "and, in the end, as always, we found people at the very last minute," says López.

The three indicate that they so assimilated their responsibilities that they started seeing potential extras everywhere. "We'd stop people on the streets if we liked them. Some were agreeable, but others thought we were pulling their legs and told us to take a hike," recalls Rodríguez.

Nevertheless, the experience as a whole was definitely positive for them.

"We made great friends and had some fantastic experiences."

That's why, "we'll need to see the movie twice. The first time, to reminisce about all the people we lived and worked with for 3 months, and the second time, we'll try to get some perspective and just be normal spectators."

When extras began to be cast, a fever was unleashed among the public for participating in the film.

"People sent us mail from all over: Two girls from the Canaries wrote to us and then showed up in Madrid ," says Muñoz.

Rodríguez remembers "Three colleagues from Tafalla who, for three days, caught the bus at 3.30 am from Madrid to Cuenca to film for 12 hours in the sun."

"You do that for passion, not for money," concludes Muñoz.

Of all the places they recruited extras, Cádiz was the most impressive: "There were lines like I've never seen before at casting calls," says López. "So we didn't have to make people wait for hours," he continues, "we eliminated those we couldn't use from the line-up. We told one woman that she couldn't participate because of her hair colour. She went home, dyed her hair, and lined up again."

Rodríguez even succumbed to temptation himself. "The wardrobe, the weapons...everything was impressive. As soon as they let me, I played a soldier in Turco's tavern," he confirms.