Mortensen gives something back to Wellington at Rings premiere 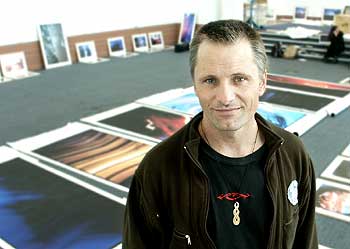 
Few members of The Lord of the Rings cast and crew are making such an impact on Wellington this week as Viggo Mortensen.

Mortensen plays Aragorn - the king who is the central character in The Return Of The King. The movie, the third and final part of New Zealand director Peter Jackson's retelling of J R R Tolkien's The Lord Of The Rings, has its world premiere in Wellington tomorrow.

For his return to Wellington Mortensen is not only taking part in the celebrations surrounding the premiere, but it also exhibiting his artworks in two local galleries.

Like many of those associated with Lord Of The Rings, Mortensen - who has been in Hollywood films such as Carlito's Way and GI Jane - was obliged to move his life to New Zealand for the 15 month shoot of the three films. Thankful for the experience, he says the exhibition is a way of giving something back to his hosts.

"It's an honour to show these pictures," Mortensen says.

"Those spaces are usually reserved for local artists, so it felt like it did - I think for all of us on this movie - that we were accepted without question and our efforts were appreciated.

"The pictures were literally something I took away from New Zealand. . .so it was nice to be able to bring them back and return the favour."

Mortensen barely had a minute to think about whether to take the role as Aragorn. Having received a last minute call-up to join the cast shortly after shooting had begun, he took the opportunity the long plane flight to New Zealand offered to discover the world of Middle Earth.

"It didn't allow me the time to get nervous about it," he says.

"On the basic physical level the first thing I had to do was sword fighting, so I had to get a sense of not only what it was like to fight, but also to walk around with a sword around your belt. Just getting the physical babysteps of the character helped."

Mortensen says no matter how big or small his role in a film he has always seen it as his job to put as much effort as possible into researching, developing and living the character.

For the role of the ranger Aragorn he spent a lot of time in the local wilderness, as well as countless hours in weapon training, rapidly improving his swordsmanship.

"Your job as an actor is to find where you can connect with a character to help tell the story," Mortensen says.

"You have to work out what you have in common and what you don't have in common. There's a lot of work involved. In better moments - and I wish they happened more of the time - I do feel I have things in common with Aragorn."
Top of this page
Last edited: 29 June 2006 14:16:58
© Massey University.