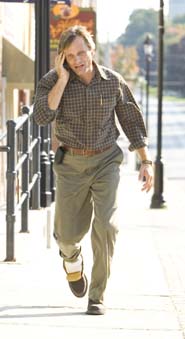 During his near-40-year-long career, David Cronenberg has earned a reputation as a director whose movies possess a premeditated intent to shock and repulse: from Shivers to The Fly, he hasn't earned the nickname of Dave "Deprave' for nothing. But after watching the 63-year-old Canadian's latest fascinating film and listening to the charming commentary that accompanies it, his reputation as an agent provocateur seems unjustly crude.

Adapted from John Wagner and Vince Locke's graphic novel, A History Of Violence marks a change of tack, if not a complete abandonment of the themes of searing violence, subversive sexuality and shifting identity that have long-remained Cronenberg mainstays. This is undoubtedly - as he freely admits during the extras - his most mainstream film to date. Which isn't anything to be ashamed of: there's even a featurette entitled "Too Commercial For Cannes'...

The story is set is a sleepy Indiana town, where steady-Eddie diner owner Tom Stall (superbly played by Viggo Mortensen) enjoys a quiet life with his family. That is until he shoots two crazed criminals during a robbery attempt. But, after some frantic media attention, the Stalls face a greater menace when scar-faced Mobster (a chilling Ed Harris) arrives, adamant that Tom is actually a notorious former gangster. Foreboding, confusion and, ultimately, extreme violence follow in this thrilling contemporary Western.

The manipulation of American mythology is just one of the many topics addressed in Cronenberg's commentary. The Crash director delivers an intelligent, thought-provoking chat, but it's also an extremely personal one that never fails to engross. Included in full is the excised "Scene 44', a dream sequence in which Harris' midriff is blown clean away by a shotgun, but rather than slaying him, he merely chuckles. It's the most typical Cronenberg moment and is accompanied by a commentary explaining his decision to abandon it. Given its exclusion, a slightly strange addition is "The Unmaking Of Scene 44'. Essentially an on-the-spot look at how the scene was executed, it's a surprisingly worthwhile watch.

"Violence's History' is a brief dissection of two blood-spraying scenes axed from the US version but left intact for us tougher European types. The aforementioned Cannes-based feature takes the form of a video diary, comprising everything from the cast's arrival to the screening and rapturous reception (Violence was nominated for the Palme d'Or but lost out to homegrown L'Enfant). It also includes Mortensen's summation of the festival, which says more about the leading man-director relationship than the festival. 'It's like a circus that I wouldn't go to unless I had a good reason,' he says. 'But I would follow David to the ends of the Earth...even to Cannes.'

Rivalling the helmer's gab-track for top spot is the fantastic hour-long "Acts Of Violence'; an all-encompassing Making Of conveying a staggering amount of production details with unrestricted contributions from what feels like every member of the cast and crew.

In terms of quantity, Violence's level of extras may not quite warrant a perfect five, but the calibre of bonus material very nearly demands it.