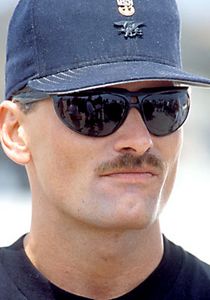 
Viggo Mortensen enters the room carrying a glass of red wine. You never see anyone in LA drinking alcohol before dark, let alone an upcoming star. He's in a mellow mood and speaks so softly that in order to hear him properly you need to be perched on the edge of your seat. Mortensen is currently shooting The Blouse Man with Anna Paquin and Diane Lane and is considered one of Hollywood's most promising new actors with credits in Portrait of A Lady, Daylight, Crimson Tide, Carlito's Way, The Indian Runner and Albino Alligator. His role as the Master Chief in G.I. Jane, where he got to beat crap out of Demi Moore, will probably propel him to tabloid hell.

What was it like, having to beat up one of Hollywood's biggest stars?

Was it a difficult scene to choreograph?

It took a little bit of time to get it right. But everybody was willing to go for it and Demi certainly wasn't worried about her face or anything.

Have you ever fought with a woman before?

I've never had an experience like that with a woman, no.

You're on the verge of becoming a huge star. How do you feel about that?

Well I'm glad you sound very sure of that fact. [Laughs] I don't know if that's a given thing. I've heard that people like the work, that they like this movie. I don't know, I gave up a long time ago taking anything for granted in the movie business. I suppose I should in life as well, but certainly in movies it can seem that something is a sure thing, that you're gonna do well, that it's gonna be the beginning, you know. I don't know if you ever get to easy street or that things are gonna be easier.

What surprised you about working with Demi?

I guess I was pleasantly surprised at the degree of her commitment, and putting up with as much as she did. I was just happy that she really wanted to go for it. She didn't try to glamourise the character, she hung in there and shaved her head - it was great that it paid off. I thought she was really right for this role.

Do you think that women could undergo that kind of training?

Yeah, I think so. Yeah, absolutely.

Yeah, generally speaking, although women are not as strong in terms of upper body strength as men, generally, right? But the profile of the average survivor of the underwater demolition training is a guy like me. Not a big guy, they're not big monsters, you know, "cause it's really more about mental toughness. It's like, in spite of being exhausted, wet and cold and tired and injured and browbeaten and all that, you stay focused on your objective.

What do you do in your spare time?

What sort of music?

I've recently recorded a CD which is spoken word and music and poetry and stories and songs.

Did you work on that with your ex-wife Exene Cervenka [who used to be in the LA punk band X]?

She played a little bit of guitar. I did another record before, that was a recording from a radio appearance that I did with other musicians. This time I did it in the studio.

How do you compare writing poetry or music to acting?

Writing I find stimulating. I mean, whether you like it or not, at least it's my take on what happened in that moment that's not edited, really, by anyone. I mean, the good thing about writing to me is that it's my words and my editing - or lack of editing - whereas in a movie you have to have faith and hand over control over a large aspect of it. Which is okay too.
Top of this page
Last edited: 8 May 2005 22:44:22
© Marie Claire.