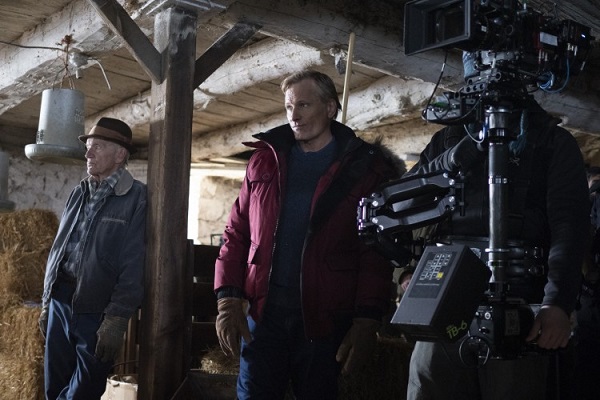 © HanWay Films/Perceval Pictures.
The prospect of spending a couple hours with one of the most tremendously unpleasant movie characters you're likely to ever encounter might not even be the first reason to check out of Viggo Mortensen's Falling, but it's certainly the most apparent. This clearly personal story, written and directed by and starring Mortensen, finds his character John grappling with the likely imminent death and deepening dementia of his father Willis, a loud, obnoxious, bigoted, abusive misogynist played in his twilight years by a terrific Lance Henriksen. You will not like this guy.

To its credit, Mortensen's film makes no real effort to excuse Willis or sugarcoat his behavior with empty sentiment; there are precious few sunbeams of tenderness piercing through to help you feel bad for him. Instead, he relentlessly insults his gay son and son-in-law (Terry Chen), his daughter (Laura Linney), and his biological grandchildren (who appropriately despise him). His only slivers of warmth seem reserved for John's young adopted daughter, Monica (Gabby Velis), and then only because she seems to regard him more as a curiosity than a threat. His relationship with Monica stands in stark contrast to the ones he shared with his own children in their youth, as evidenced by the increasingly ugly parenting work detailed, often impressionistically, in flashback.

Falling also makes no real effort here to pathologize Willis. He's not someone who was formed into a monster, but is treated rather an entity unto himself. There are glimpses of past hurt, but the film is careful to avoid any pat psychological explanation for his behavior. Mortensen's focus, unsurprisingly, is fixed on the two lead performances, and indeed the film is acutely acted for the most part. Though John appears to have the patience of Job when it comes to his old man, Mortensen never misses a little sigh or exasperated inflection in his voice; this man will never get over the pain his father has caused and continues to cause him, and it's very apparently a struggle for him to keep hold on what little love he can muster, even if it exists only out of a sense of sheer filial duty. Meanwhile, Henriksen has long deserved a big, juicy role like this. He's not above hamming it up, and his delight in the part seeps into Willis, bringing a vicious glimmer of glee to his endless invective. Deep down he enjoys hurting people because it's the only thing that soothes his constant anger.

Mortensen, in his first effort behind the camera, proves to be an unflashy director, and that's fine for his simple goals. True to his on-screen persona as a sort-of "soulful" guy with a hobby of amateur but experienced photography, the film is peppered with vaguely Malickian nature tableaux, a harmonious contrast to the misery that not only threatens to blow this family away, but that, as a lifelong farmer, Willis has idealized — inappropriately, but still — as a symbol of his independence and masculinity. It's not unreasonable that viewers would bail on this — and many will — as they are given no reason to care about this nasty, incorrigible prick or his put-upon son, but in resisting the maudlin arc so clearly available to the material, Falling's unfailing earnestness and emotional simplicity become more features than bugs.