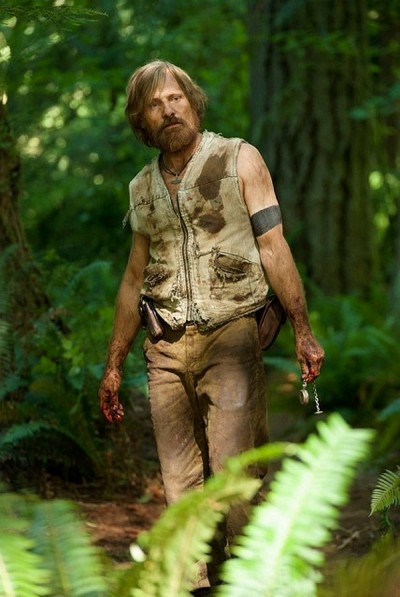 © Bleecker Street.
This is the film I've been waiting for. And I don't just mean it's the film I was waiting for at Sundance, but perhaps this is the film I was waiting to come across in my life. Matt Ross' Captain Fantastic is one of the most inspiring, invigorating, and intelligent films I've ever seen at Sundance. I don't care if that sounds hyperbolic, this is one of those times when hyperbole is actually necessary. This film floored me, and I'm still on a high from it, with so much to say about it. It's brilliant, it's uplifting, it's encouraging, it's warm, it's touching, it's funny, it's endearing. All these adjectives are necessary because it's a film that has filled me with so much happiness and hopefulness that I can't help expressing my love for this film. It's everything.

What the hell is this film about? Captain Fantastic stars Viggo Mortensen as a loving father of a family of six kids, living out in the wilderness, raising them to be intelligent, strong individuals through training and reading. Their life is inspired by Noam Chomsky, who is referenced throughout, with an anti-corporate attitude but intellectual approach to living. It's not about excess, or worthless entertainment; it's not about all the frivolous, wasteful things everyone spends their money on, it's about only buying what they need, and dedicating their learning to universal truths and wondrous beauty in this world. The way they approach this mindset in the film is wonderful, not overbearing or grating at all, with just the right amount of charisma.

Essentially, Mortensen plays that kind of arrogant, cerebral person who shoots down (using intelligence) anyone that cares about money. In this society, he's the person that many people love to hate, because he refuses to be like everyone else. But that's why I love him. The story involves Mortensen and his naturalist kids traveling out into the world, awkward as expected, clashing with everyone along the way - other people in his family and pretty much everyone they encounter. It's played for laughs, but it's also so extremely intelligently written, every single line is profound. Every last conversation has so much depth to it, because that's what happens when intellectualism is encouraged. It's what we desperately need more of right now.

I didn't know what to expect with this film going in, but I was swept away by it, caught up until the very end. Laughing, smiling, cheering, applauding at all the right moments. There is a score that sounds like it was done by Jónsi, even though it wasn't [sic], but it adds a mesmerizing dreamlike/uplifting vibe to the film. The cinematography throughout is gorgeous, as Mortensen drives a blue bus (nicknamed "Steve") down from the Northwest to Arizona. Every last scene and every moment is handled with care. It's often overtly hilarious because Mortensen speaks so honestly, he always tells his kids the real answers to their questions, never filtering anything. It made me smile more and more every time it happened. Honesty is a key part of my life.

What it really comes down to is whether it's possible to raise kids like this, and be a loving parent in a world that sees this lifestyle as dangerous. And I'm sure everyone already knows the answer to that question if so many people are in love with this film already. It gives me hope that it's possible to be an intellectual, to clash with the unenlightened citizens of this world, and to still have such a big heart. This is one of those cases when I think this film found me as much as I found it. It's everything that I believe in, that I support, and it's expressed so perfectly; I can't wait for the rest of the world to get the chance to experience it. Go in with an open mind, an open heart, and you'll leave as inspired and enlivened as I was. It's film full of life.