Viggo Mortensen shows his independent side

Source: Herald Scotland
The Lord Of The Rings star returns to Argentina for Jauja. 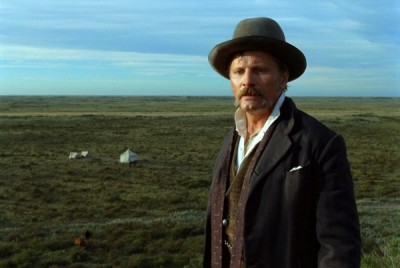 © 4L Productions.
Viggo Mortensen says that "getting ready is one of the parts of making movies I like a lot." It's a disarmingly innocuous way of describing an approach that is almost obsessively precise.

Before playing a Russian gangster in David Cronenberg's Eastern Promises, the actor spent time with various shady types in the Urals, and discovered the secret language of tattooing in the Russian underworld that would significantly influence the story. To play William Burroughs in On The Road, he arrived on set in New Orleans with his own pistol and shoulder holster, and first editions of books that Burroughs himself would have read. And to play the 19th-century Danish soldier in his new film, Jauja, he went shopping in Copenhagen.

"I was fortunate to locate a period-correct infantry uniform, sabre, medal and telescope," he recalls. "Also some books from the period, including a Danish translation of Mark Twain's Life On The Mississippi, which are used in the movie. I've found it often helps me understand and believe in my character. When I'm able, I'll contribute tangible elements of this invented person's life experience, physical objects or parts of a costume that will have practical use during the shoot."

Michael Fassbender, who played Jung to Mortensen's Freud in Cronenberg's A Dangerous Method, once told me, with a fond awe of his co-star's routine,

"I think it's the same with every film. People don't know when he's going to arrive, but it will always be before he's due on set. He gets off the plane, rents a car, turns up and starts to decorate his trailer. This time he brought some of the things from that Viennese world that Freud inhabited. And he wrote those letters you see in the film, painstakingly, like Freud did.

"That's his process. These things add texture to his characters. I was never overwhelmed, because there was a real lightness and easiness to it. Viggo is a very independent soul, and a very gentle one."

And, it appears, a bit of a wag. "We both thought the script was really funny, and tried to push the comedy," adds Fassbender. "One day we were shooting a scene and Viggo kept nudging these ceramic penises on his desk towards me - until they were surrounding my coffee cup."

For many, the prevailing image of Mortensen is of the heroic Aragorn from The Lord Of The Rings, a pretty straightforward chap given that he's surrounded by mythical creatures and is dating an elf. Yet there's clearly a lot more to the Danish-American, both in the range of his work and his personality.

When I meet him in London, the first impression is full of contrasts. With piercing blue eyes, well-groomed hair and in crisply ironed shirt and slacks, the handsome 56-year-old seems surprisingly formal. But when he sits down he starts drinking mate - the "national infusion" of Argentina - properly, from a gourd and through a metal straw, giving the first image a little jolt. And then I glance down and notice his multi-coloured socks. Mortensen keeps you on your toes.

The mate isn't so surprising, given that the actor grew up in Argentina, retains strong connections with the country - with a passion for his childhood soccer team, San Lorenzo - and that we're here to talk about the second film he's made there, Jauja.

Directed by the maverick Argentine director Lisandro Alonso, whose minimalist masterpieces have earned him an ardent following, Jauja is near-impossible to categorise. Set in Patagonia in the 1880s, it centres on Mortensen's Danish soldier and engineer, working for the Argentine army during the "conquest of the desert", the genocide of the region's indigenous Indians. When the captain's teenage daughter runs off with a soldier, he gives chase into the desert, and an already strange film launches itself into an existential rabbit hole.

Mortensen thinks of his captain as "a Danish Don Quixote" and the film as a "hybrid fairytale" with echoes of Hans Christian Andersen and Borges. Few stars of his stature would consider such a low-budget arthouse film in a foreign language - let alone co-produce it, be able to act in both Spanish and Danish, and be prepared to sport such spectacularly awful whiskers. But this is bread and butter for the independently minded Mortensen.

"No one makes movies like Lisandro," he observes. "People in this business always try to compare filmmakers, but he has a singular voice, a very unaffected, direct way of expressing himself and telling stories." The film represented firsts for both men: for Alonso, working with professional actors; for the star, acting in Danish. It seems Mortensen was the calmer of the two.

He remembers the first scene he had to shoot in Danish.

"I'm really trying to focus, when suddenly Lisandro's running towards me, looking wild-eyed. And he asks, 'What do I say to the actors?' And I say, 'What do you mean? I'm an actor!'

"Then we do the scene and he's looking puzzled. I ask him what's wrong. He goes, 'I didn't understand a thing you were saying.' And I said, 'Well, we were speaking in Danish.' I couldn't help laughing. On the one hand he's this consummate artist, on the other he's humble and open. He will say something like that without even thinking, which I love about him."

The anecdote is a reminder of the different temperaments, the Latin and the Scandinavian, that infuse the film and might be contained simultaneously within Mortensen himself. He was born in New York to an American mother and Danish father, but spent his formative years in Argentina, where his father worked on ranches and where he learned fluent Spanish. He currently spends much of his time in Spain with his partner, the actress Ariadna Gil.

"I have a Scandinavian side," he says, "that mindset of orderliness, a need for a logical explanation for things. I understand the sense of humour and irony that they have. But I also understand the seemingly random and chaotic - but actually just different - way of organising yourself that people have in Argentina and other Latin countries." He smiles. "I can see the humour in it."

It was Mortensen's then 11-year-old son who persuaded him to take the part of Aragorn, and commit to Peter Jackson's lengthy shoot in New Zealand in the late 1990s.

"Being familiar with Tolkien's story, Henry made a very convincing argument for my accepting the challenge. He was right, and I will always be grateful to him for his good advice."

At that time the actor's career was solid but largely under the radar. Highlights were the bad-apple brother in Sean Penn's The Indian Runner, and Demi Moore's tough but philosophical instructor in GI Jane (again amusingly moustachioed and atypically literate). But Aragorn made him a star.

I wonder if being in his early forties when that level of fame struck helped keep his feet on the ground. "I think it's always good to work as if any particular day of filming might be your last. At the same time, I also knew that Aragorn was not my first and probably wouldn't be my last role. I believe that helped me relax, helped me understand that it was always 'only a movie'."

And typically of the man, he's profited not with an ascent to A-list Hollywood projects, but an eclectic range of roles that includes the father in the devastating post-apocalypse drama The Road, a 17th-century soldier-turned-mercenary in Spanish swashbuckler Alatriste, identical twins in his first Argentine film, thriller Everybody Has A Plan, and the conman in the Patricia Highsmith adaptation Two Faces Of January.

The stand-out achievements have been those with Cronenberg, especially A History Of Violence, and Eastern Promises, the latter earning him an Oscar nomination. "I love working with him," he says of Cronenberg. "In some ways he's a different kind of person entirely than Lisandro, but they're similar in that they ask lots of questions, but don't give answers. I think it's great for an artist to do that, it's respectful of the audience; it can be annoying and frustrating, but it gives you something to chew on."

An accomplished poet, painter and photographer, he also owns his own publishing company, Percevel Press.

"It's usually much easier to help others see the proverbial creative forest for the trees, than it is to edit oneself," he laughs.

Do his agents ever despair at his choices, want him to make bigger films? "It is what it is; I think they've accepted it. I prefer to be in stories that I want to go and see myself and that I'd feel proud of. But it's not that I'm trying to avoid doing a mainstream movie."

The sticking point, he says, is that films such as Jauja often take years to finance and get under way - and rather than abandon them when he's been offered studio films, he sticks to his guns and waits. "And so sometimes I've missed opportunities. But once I give my word, I'm in."

Just like his most famous character, honourable to the last.