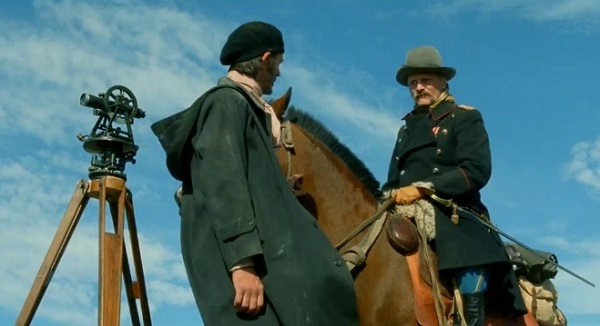 © 4L Productions.
In his career, Viggo Mortensen has inhabited a range of striking characters, from Aragorn in The Lord of the Rings to a reformed hit man forced to reclaim his past in A History of Violence to a 17th century Spanish soldier in Alatriste to Sigmund Freud in A Dangerous Method to an aging con man running out of luck in last year's The Two Faces of January, and many more.

For his latest drama, Jauja (pronounced "how-ha"), Argentine director Lisandro Alonso (Los Muertos, Liverpool) has cast Mortensen as yet another singular character, that of Danish engineer Gunnar Dinesen. In 19th century Patagonia, he is working with the Argentine army in its brutal conquest of the region and its tribes when his teenage daughter runs away with a soldier. When he discovers the girl missing, Dinesen takes off into the desert in search of her, a quest that grows more arduous, dangerous and surreal the longer it goes on in a visually stunning Western that sets Dinesen as a tiny figure in a vast, endless landscape.

Mortensen, 56, was not able to attend when Jauja made its local debut at the San Francisco International Film Festival, but he answered questions via e-mail.

The story is enigmatic, even hallucinatory in some aspects. Beyond what is on the page, how did Alonso describe this man and his quest to you? And as you prepared to get under Dinesen's skin, what were your own ideas about who he is and what he's doing in Patagonia in the middle of a conflict with a teenage daughter in tow?

Lisandro did not say that much, beyond some practical suggestions during shooting. We kind of understood each other, and understood screenwriter Fabián Casas' ideas, right from the start. I consulted with both of them constantly as we gradually built the Danish character 'Captain Gunnar Dinesen,' and enjoyed the process a great deal.

All I knew was that he was practical, stubborn, and limited by his northern European rational mind-set. The more things got strange in the course of the story, the more effective became the tension between his yearning for logical explanations for everything that happens to him and the existential warping of events and leaps out of linear time that he and the audience are faced with.

Dinesen walks around the desert and climbs steep formations, all of it in what looks like a very heavy suit. Granted, you are doing these things only for the length of a shot, but was it physically taxing? And was it an attraction to the role, that Dinesen is a man of action in a film that is largely free of dialogue?

Sometimes it was quite awkward and tiring to tramp around in that heavy greatcoat, wearing those slippery-soled riding boots, tripping over that saber. But I found that all of that helped me construct a sort of Danish Don Quixote, a man who has no idea how clumsy he seems in those landscapes, once he is off his horse. I've often played characters who are not given much dialogue. That has never prevented me from finding a way to express a person's feelings or thoughts.

You also composed music for a director who normally eschews scores in his films. How did that come about?

I was surprised that Lisandro wanted to use music in this way, as he had never done that in his first four movies. He said toward the end of the shoot that he wanted something lyrical, perhaps played on guitar, for the sequence under the stars, which is an important transition point in the story. He said he did not care if it was modern or period music, that it should not be recognizable. We did not have much of any money left in the budget for this, as we had just enough to complete the shoot and the editing, so, as one possible, free-of-charge option, I sent him some tracks I had previously composed featuring the great guitar player Buckethead.

Lisandro chose two tracks from a record called Please Tomorrow, recorded in 2004. I think he made a good choice because these two pieces of music fit in very well with the mood of the above-mentioned scene and also as a final "recapping" device during the end credits. The circular structure of this last piece seemed to effectively mirror the story's construction.

Your representative told me that you're getting ready to go to the Sahara, presumably to make a film. Jauja was shot in Patagonia, Far from Men in Morocco, Two Faces of January in Greece and Turkey, Lord of the Rings in New Zealand. In your quest for roles, how much is driven by your sense of adventure and the desire to experience places from a unique vantage point?

I was meant to go to the Western Sahara International Film Festival (FiSahara) to present Loin des hommes (Far From Men), but my mother's death unfortunately made that impossible at the last moment. I would like to be able to attend on another occasion, as it is a unique festival. I am also happy to help draw attention to a terribly unfair situation in that country, which was illegally invaded 40 years ago by Morocco and has since been unlawfully occupied, ignoring and/or violating repeated U.N. decrees and mandates, which would have been impossible without the active and shameless collusion of several Western nations, first among them the U.S., France and Spain.

I do enjoy traveling and learning about different cultures, something that is often very useful to me in preparing my work on movie characters, but tourism is not a deciding factor in my choice of roles. Story comes first, regardless of where it takes place.