Viggo Mortensen: "The feeling of the absurd is something that's constant with me"

By Ima Sanchis - translated by Ollie and Zoe

Source: La Vanguardia
He's friendly and serious. He has in him something from all the characters he has played, especially Aragorn (The Lord of the Rings), open spaces, woods, landscapes and silence seem to be his natural habitat, although his friends describe him as hyperactive, because of his multiple artistic facets. He is the son of an American and a Dane and was raised in Argentina until he was 11 years old. When his parents separated, he lived with his mother in New York. "As for me, I like to be alone and have confidence in my ability to survive all by myself. The separation increased that tendency." Now with Far from Men, he returns to those open spaces to play that solitary side that exists in him. 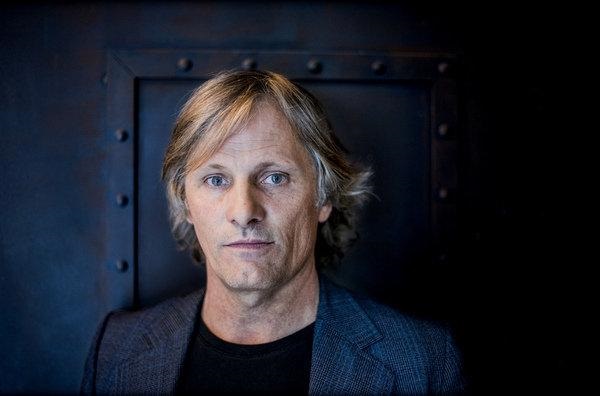 'Loin des Hommes' Promotion, Barcelona - 28 …
Image Xavier Cervera.
© La Vanguardia Ediciones S.L.
When I think I know what a person is going to do or say, I'm wrong half the time, so it's better to remain open...That's what the film that I've co-produced and star in deals with, two people that were born in Algeria, an Arab and a European, who believe they know everything about each other without actually knowing each other.

Thanks to the journey that they undertake together in which they have to work together, that is to say listen to each other, they discover their ignorance.

Nor do we see ourselves. People today are much less present in spite of being hyper-connected. You see people in the street absorbed in their cell-phone; there's plenty of time for that message. What's more important than now?

You are a film producer, publisher, poet, painter, photographer, musician…

Yes, and one thing isn't more important than another. It's a way of exploring.

As children, we play at being someone else and we don't need directors or second takes and that's my work as an actor. As adults we calcify our body, our mind, our way of thinking, so that, although at times it can be frustrating, I continue being interested in acting, because it forces me to change my point of view.

Yes, but so many disciplines in a single man…

They are part of the same effort to remember, to record, to participate in what is happening - that river that's passing by that is life. Creating is my way of having an opinion, of looking around with more attention.

But you, what do you want to say?

I don't have an intention; I don't even have a preferred genre in film. I believe that, in general, the films that are being made in any genre in any country are mediocre. The exceptional interests me.

The role of Aragorn in The Lord of the Rings changed your life.

Yes, and it was unexpected; no one on the team expected that overwhelming success. It opened doors for me; I could choose. And the offer was also unexpected. They asked for an answer from me almost immediately.

Why did you have doubts about it?

My son was then 11 years old; saying yes meant not seeing him for a long time. We shot in New Zealand for four years. But it was he, who was by my side at that moment, who ordered me, "Say yes, don´t think about it, Dad!" He had read Tolkien's work and he loved it. In the end, he was able to come to see me several times and even work in the wardrobe [department] and as an extra.

What did you learn in that shoot?

A lot, not only technically, because that movie was innovative digitally, but also personally, because such a long shoot isn't normal. It was like a little life for all of us.

You kept the horse you were riding.

He was a good co-worker on the shoot. I didn't have in mind to buy myself a horse but I learned they were going to sell it somewhere and I felt sorry for him.

You brought a horse from New Zealand!

I left him there and have gone to see him from time to time. He died a little while ago.

I'm quiet and solitary. I'm comfortable living alone for long periods. If a day goes by and I don't have the possibility of being in silence for at least half an hour, I get anxious. I've always been like that. Since my youth, I've avoided parties; then I'd go and have a good time, but my instinct was not to go.

You aren't seen at parties or festivals.

"Ah, look, it's Viggo! Good guy, you should contact him for your film, the role is [perfect] for him." That's how careers are made. But I don't feel comfortable and have been lucky to be able to continue working without needing that.

It bores me. It makes me nervous that they take thousands of photos of me. I also could have earned more money if I'd said yes to selling watches or colognes, but I haven't wanted to. As a viewer, if I open a magazine and see an actor selling razors, he's going to have to work very hard on screen to make me forget that image.

As they say in Denmark, your last suit has no pockets.

But to be an actor, you have to work with a team, and I benefit a lot from those situations. I like to listen and learn from others. Cinema has been good for me that way - learning to get along with very different people, a real challenge.

What do you admire in others?

Moral courage, not failing to do or say what you think out of fear of becoming an enemy of your friends or a friend of your enemies. Not being a prisoner of ideologies, of preconceived ideas or what others think about you.

What surprises you about life?

That it continues. Life is a continual miracle. The feeling of the absurd is something that's constantly with me, perhaps because I spend my life creating characters and acting out emotions in front of a film crew, looking for magic.

When does it emerge?

Sometimes very veteran crews suddenly perceive that something is happening in a scene that transports them. Something happened there that, at its best, is translated to the screen. Those are the moments that are worthwhile.