For the funeral of my mother, as I told you, I wrote a poem on the same day of the ceremony, on July 8. I did it in my rented car, at 3 in the morning, because I couldn't sleep and there were a lot of people - cousins and friends of the family - in the house. I wanted to be alone that night, to be with my mother, and the only way was getting out of the house and into the car. I wanted to write and remember what she was and what she suffered with her dementia and her Parkinson´s disease, and above all her way of getting over the limitations and pains those illnesses brought her. Even if it was in a very simple way, I wanted to speak about that and not only about the idyllic past of a generous and beautiful woman.

Grace when she was 18 or 19 years old.
© Viggo Mortensen.
I'm sending you what I wrote to remind me of her. My truth reconstructed, at that moment, when I imagined her by my side.

Forgetting is awful
until we forget
that we have
forgotten.
We might
imagine
that
forgetting
is like that,
that it
can finally be
its own blessing.

Surely there
are many
here today
who've gradually
witnessed
the disappearance
of thoughts
and names
and friends
and loved ones
and numbers
and things
ever so near
ever so simple.
Perhaps you've
even experienced
this forgetting
in yourself.

Grace,
our mother
our grandmother
our aunt
our sister
our wife
our friend
never forgot
the meaning
of one particular word,
though,
even after
she could
no longer
pronounce it.

This word
gradually became
a shorter
and shorter sound,
until it often
was no more
than a look in her eye,
a look of concern,
of surprise
or,
on her best days,
one of unguarded
girlish joy.

The search for this word,
the glimpses of it,
however brief,
seemed
to tell
of so urgent
a need to know
what might evoke
the vital,
persistent,
reassuring,
and at times astonishing
feeling she carried
so close to the surface
of her waking moments
that the quiet
hum in her chest
would finally
carry to her lips
with faintest vibration
the memory
of the sound
she longed for.

In the end
as in the beginning
she always held
within her
just the right tone,
that one word
for all things --
not your name
or mine
not her mother's
nor her father's
nor that of any living thing,
of any object or place.

To her lasting
credit, that word
was "love".
When she could
still sound it out
cleanly
it might come in a phrase:
"I love you"

or
later on
simply as

and finally only
as a whisper's echo,
a single note,
a syllable hung out gently,
an exhalation,
offered timidly,
disintegrating
as it came to her
in a blink,
passing across
her remarkably
unlined brow
for one
soothing
instant,
dilating her pupils
as she rested
her head
against the comfort
of smiling,
or nearly smiling.

It was necessary
to remember
that word
"love" --
the most important
of words
to her
next to
"thank
you" --
to see beyond
that word,
to its origins,
to know you
and know me
to know herself together with us
to know somehow,
if fleetingly,
right until
the last day,
until that last
understanding gaze
she offered you,
that last
faint
pressing
of her fingertips
against yours,
that furtive
parting glance
and purposeful intake
of breath.

The need to
own that word
was more telling
than her
native courage
and dignity,
more admirable
than
her instinctive
curiosity
and concern
for others --
more telling
than
all these things,
and yet
it embodied
all of them
at once.

We are gathered here
today
because
of that word,
because
she taught us
its meaning.
Thank
you. 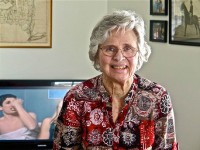 It's a great image that of the son locked in a car, outside the house where his relatives are staying because of the burial of a loved one. And that son writing a poem. You could begin a film with that because the action, the image, has great ontologic power. The poem is beautiful, and it struck me how much your mother resembled you! I love you, brother.

In September I'm going to read T.S. Eliot's "The Waste Land"at the British Library in London to help celebrate the centennial of this poem. Eliot's publishing house, Faber & Faber, asked me because a couple of years ago I recorded a version of the poem that seems to have been liked. They offered me the 11th or 18th of that month. I chose September 11th for the recent association with the 2001 terrorist attack in New York and the 1973 one in Chile on that date. The poem speaks, among other things, about the commotion of the First World War and the hellish storm that modern man has created for himself and nature with his savage behaviour. On reading the poem again this morning, I was especially impressed by the way of enduring and containing pain that Eliot's writing has. The pain affects me more, touches me more, by being contained. The poem also has many absurd and somehow funny moments. Like Joyce's novel Ulysses, "The Waste Land" is a puzzle with a thousand mythological and literary references. In no way do I understand it all, but I like how Eliot's poem sounds, the rhythm it has when it's read aloud. Lovely mystery.

Hello Cuervo: Yes, "The Wasteland," beautiful. Notice that Eliot did the same as Joyce, who took the structure of the myth to analyze contemporary reality. "The Wasteland" impresses and has more effect on me because in Ulysses one has to become Irish to thoroughly understand the book, and in Eliot's long poem, that's not necessary. I have things from that poem floating in my head that always come back to me, the cab stopped at the door waiting for a girl, the girl eating canned food or something like that, this line: "Each in his prison/ thinking of the key." Or the inversion that occurs as soon as the poem begins - April, the spring, seen as nature's cruelty. Here it's 11 in the morning. I took Julián and Rita out for a walk, returned, bathed Julian, gave him a bottle and now he's sleeping. Shortly I'll go out to pick up Anita who's been at a friend's home since last night and she asked me to take her to the zoo. In between, I'm going to go for a while to the studio where the Babasónicos are recording a CD. I stop there some afternoons and hang out with them. They have a great vibe. Last night, after feeding Julián and putting him to sleep, and eating a few stuffed zucchinis myself, I threw myself on the bed and turned on the TV. You were extorting Kirk Douglas' son and it tickled me that your character had on a Canadian lumber jacket. I have one just like it in my closet. Nobody likes it but me and it goes with me move after move.

That jacket and Michael Douglas
P.S. In Chile, wastelands are called "sitio eriazo." I love that. So "The Wasteland" would be a "sitio eriazo!"

Today I returned by train with Ari and her children from the north of Catalonia to Madrid and played music from my computer through earphones for Léo. Several of the tracks were old Babasónicos songs - small world! Leo liked the ones from the Babasónica CD. I also played two Bestia Bebé tracks and several from the Ramones and Velvet Underground. 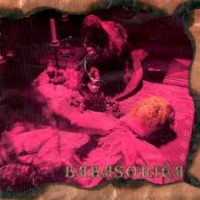 Babasónica
I'm sending you a little bit of the recording I did of "The Wasteland" for Faber & Faber about four years ago. It's the only one I could find on the internet. I think that the whole recording can be purchased as a download somehow; I've no idea.

Look at this part of the "Fire Sermon": "A rat crept softly through the vegetation/Dragging its slimy belly on the bank/While I was fishing in the dull canal/On a winter evening round behind the gashouse/Musing upon the king my brother's wreck/And on the king my father's death before him." And I adapted it: "One winter afternoon behind the Gasometro, thinking about the ruin of my brother, Globo…"

Good thing you're a Cuervo and you read Eliot, because if not, I'd wonder if you weren't a bit of an asshole. I love you a lot, brother.

Now you made me want to go back to reading Eliot. I grabbed "The Lovesong of J. Alfred Prufrock," that I have in English. The tone of the verses and the music are great.

P.S. I'm going to the airport to pick up Guada.

Go for it, champion. Kisses to everyone.