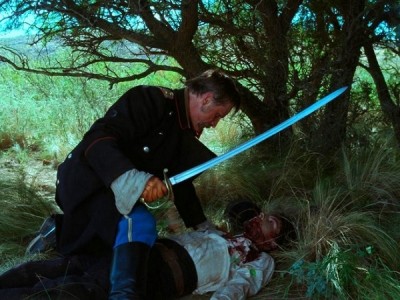 © 4L Productions.
Mysteriously opaque and thrillingly spooky, Lisandro Alonso's Jauja evokes what many films aspire to yet rarely achieve: a genuine lucid state of cinema-as-dream. Staking out terrain somewhere between a surrealist Western and John Ford-like fairy-tale, it's a singular work from the Argentine filmmaker, who takes his previous explorations of strangers in strange lands in films like Los Muertos and Liverpool to a whole new level of enigma here. It's also the first time he's worked with a major movie actor, and in this case, a guy who was practically born to wander the edges of time and space: the great Viggo Mortensen.

Jauja's title references the mythical city of lore, a place, we're warned at the outset, with the ability to derange all those who search for it. It's Patagonia, 1882, and Mortensen — carved from a handlebar mustache and navy trench-coat like some cosmic lieutenant — is Gunnar Dinesen, a Danish engineer in the company of the Spanish army who've arrived to ravage the land. The Spaniards appear to be unraveling, and the specter of impotent colonialism is everywhere: One otherwise revered captain is rumored to have gone insane, à la Joseph Conrad's Col. Kurtz, in his pursuit of the local "coconut heads," while an early scene depicts another furiously jerking off into a pond.

When Dinesen's teenage daughter Ingeborg (Viilbjørk Malling Agger) vanishes into the wilderness with a young soldier, he sets out to find her — and the film gradually sheds its historical concerns and becomes the slow-cinema equivalent of an episode of The Twilight Zone. No doubt Jauja's languid stride and lack of incident will infuriate audiences who prefer pesky intrusions like plot and backstory, yet the film's insidious design richly rewards those willing to play along. Distilled to the essence of the persona he picked up in Middle-earth in Peter Jackson's Lord of the Rings trilogy and honed under David Cronenberg in A History of Violence and Eastern Promises, Mortensen makes for a perfect wandering cipher, and as Dinesen stumbles further into the desert, it only gradually dawns on him — and the audience — that he may have strayed into a parallel waking state. Alonso's coup is to suggest the slipstream with only the wryest of illusions: a shaggy dog that might be a shape-shifting spirit; a wooden toy that serves as a time-travel talisman; or an old lady in cave that just might be his missing daughter (or not — therein lies the fun.)

Reinforcing Jauja's narrative japery is Alonso's formal gambit of projecting his film in an un-matted (1.33:1) Academy ratio. This unusual framing — with its quaintly rounded corners hosting artificially staged action — calls to mind the earliest experiments in cinema, and indeed the film's events take place just a few years before the birth of the art form. The cumulative effect is entrancing, as Alonso and his director of photography Timo Salminen stage deep-focus compositions that sit like dioramas, while the saturated postcard-tint colors further heighten the sense of time displaced. On a purely childlike level, the movie even recalls the curved borders and fish-tank perspective of an old View Master reel — if you took an hour to depress the lever between each frame, that is.

The film's final act inversion — a sublime sequence that recalls both the surrealism of Luis Buñuel and the bizarro teen hideaway of Louis Malle's Black Moon — might throw some for a loop, but it's of a piece with Alonso's notion that the film deals in the ghosts that haunt us. (In some ways, it's also the world's weirdest coming-of-age story, told from the perspective of a girl imagining her father's anxieties…as an old-world Western.) That a precise reading of the film eludes even its architect only adds to Jauja's pleasures. Like the best of dream cinema, it has the ability to change shape on subsequent viewings.