By Marc - translated by Ollie and Zoe

Source: Another Time, Another Place 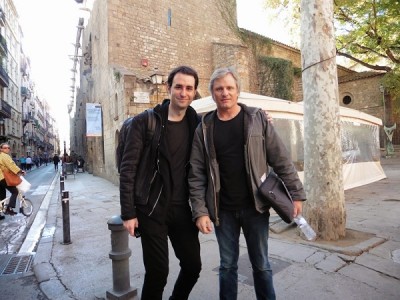 Day of the Solos performance at Teatre Romea, …
Image Marc.
© Another Time, Another Place.
As part of the Solos series, where artistically speaking, artists open up and share their intimate space to recite and act in front of the audience, today Canciones de invierno, by pianist Rafel Plana and Viggo Mortensen, was performed at the Romea Theatre.

In the lobby, the actor's CDs and books were displayed for sale, and they can also be purchased in the Filmoteca bookstore. The proceeds will go to benefit the Xamfrá Music and Stage Centre for Social Inclusion in the Raval neighborhood. Viggo announced it himself at the performance, reminding [the audience] that all of the proceeds derived from the event go entirely to the above institution; he is not taking a cent.

The theatre's stage was characterized by its simplicity, where a moon illuminated in its cycle provided the only source of light; the props consisted of just a few stones and a little water, simulating a mountain. The piano as main element and starring role.

Viggo made his appearance down the aisle and behaved as if he were alone, moving freely around the stage, checking out his environment. He poured himself a glass of wine while looking at the piano, playing a few notes. Seconds later Rafel came on stage with a similar attitude, following in his footsteps; the connection between the two was instantly clear.

Some pages came along with the performer who sat down on a stone to start reading his poems; he began by speaking about the paradigms of a free man; part of the selection can be found in his book Canciones de invierno, that lends its name to the performance. A place was also found for other favorites of the artist, like Izet Sarajlić, or "Sin llaves y a oscuras" by Fabián Casas, a reflection about death as a transition and temporary stage.

He proceeded with another piece in which he speaks about his childhood which he tried to make into a memory exercise about how he saw his earliest vision of the world and captured it with pen to paper. The evening continued with various themes like "Matinee" which related to his career as an actor and various subjects such as his path through life, highlighting his perception and attitude toward it and its outcome.

In spite of the whole event being in Spanish with his characteristic Argentine accent, he ventured to read "Elogio de la discreción" by Anna Rossell in perfect Catalan. He remembered the first time that he set foot in this country in 1995, when he filmed the movie Gimlet directed by José Luis Costa in Barcelona with Ángela Molina. At that time, he wrote the poem, "Otoño catalán"[Catalan Autumn], an original title like few others, he commented ironically.

Viggo talked about his interests, admitting that, for him, there's no difference between composing or writing; all expressions of art come by different paths, but they all have a common origin. One feeling leads him to another, so while he is writing, he can also hear a melody.

Rafel Plana constantly accompanied the speaker, shaping the musical background, and gaining in presence when Viggo sang in Spanish as well as in English. As a pianist, he even risked a particularly difficult piece, right after having mentioned an analogy related to the complex task of creating in any form, as was the case for Alexander Scriabin whose Opus 6 he then played.

Approximately halfway through the performance, silence reigned for a moment and the Master of Ceremonies blurted out "Descanso" [Rest]; the audience broke out in applause and Viggo hurried to make it clear that this wasn't actually a break [in the program] but that the poem was titled that way. He took advantage of the atmosphere created to comment that it was strange that he had spoken about everything but soccer, although his passion for the San Lorenzo team is well known.

He had time for another of his selected poems, "The Wolf," which he read in both English and Spanish, although he himself indicated that he didn't appreciate translations too much since part of the essence is lost and betrayed by them. It's an arduous task to interpret concepts, and the possibility exists that they don't remain as nuanced as [they were] in their original form.

Viggo finished the performance by again singing one of the pieces in English, but not before taking the opportunity to read an extensive poem as the last arrow in his quiver. He'd been on stage for an hour in which closeness and familiarity had taken hold of the situation, more than enough time for the idea and the proposed concepts.

In 2011, he appeared in the play Purgatorio in Madrid, and today he has returned for a single, exclusive evening, with scarcely any promotion being noted. It´s not every day we have the pleasure of seeing in a theatre in Barcelona an international actor with the stature of Viggo Mortensen.