By Pedro Valero - translated by Ollie and Zoe

Source: Levante-EMV
"I didn't know if I'd make it," acknowledges the actor after landing in the capital of Túria. 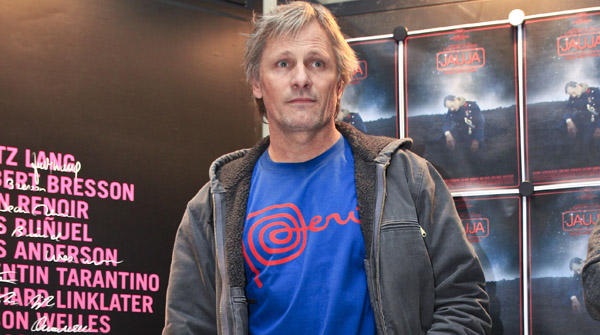 Presentation of 'Jauja' at the Filmoteca de ….
© Levante-emv.
Thanks to a lightning trip, the American actor yesterday presented the premiere of the film Jauja in the Filmoteca de Valencia. Despite the uncomfortable effects of jet lag, Mortensen had the time and strength to chat with the fans and leave a fond memory in the city.

The polyglot actor showed up last night in the capital on the Túria [tr. note: Valencia´s river] on a lightning trip after crossing the Atlantic Ocean. "Fortunately I've been able to come after returning from the United States, where I've been staying with my parents. I didn't know if I could make it. I've never been in this theatre which looks really nice; the sound is very good, the picture as well...Now I hope that they like the film," he said a few minutes after briefly addressing the hundred audience members who were going to attend Jauja´s premiere.

It's the latest, acclaimed film by Argentine director Lisandro Alonso, starring Mortensen. "Nowhere has the film been better received than in Spain. It's not a multiplex film, but it's received the best reviews of all the films I've made, more than Lord of the Rings," declared Diego Alatriste's alter ego with scarcely a thread of voice left. The effects of jet lag were merciless for the celebrity yesterday. Mortensen, who came to the appointment in casual attire - jacket, blue T-shirt with a Peruvian slogan, jeans and running shoes - was unable to hide the tell-tale circles under his eyes that marked his tired face. In fact, before entering the Filmoteca by the back door, he asked for a "time-out" to be able to take a drag off a cigarette on Moratín Street. It was his only breather before meeting with his fans. Someone took advantage of that moment of weakness to take a "selfie" with him, which he didn't have the strength to refuse.

Despite his exhaustion, Mortensen's tongue did not call a truce. The actor refused to stop talking about his movie. "It's unique. It brings together aspects of mythology, history, fairy tales...It's a very special combination of Scandinavian and South American storytelling. It's as Argentine as it is Danish," he concluded as he fought off the charms of Morpheus as well as he could.

Between the film lovers and the Mortensen followers, the news of his presence in the Filmoteca was spreading like wildfire along the long line that had formed at the doors of the building. "We didn't know anything about this! We just found out!" exclaimed one couple. They weren't the only ones. The majority came across the valiant Aragorn of Middle Earth when they went by the ticket office. A distracted woman arrived too late.

"Excuse me, they told me that Viggo Mortensen is here. I can't believe it...What floor is he on?" she asked in the elevator. Too bad. He'd sped off, like a shooting star.