Dear Cuervo, I´ve already told you that I woke up on Thursday with the idea that we would defeat River. And that´s what happened. The truth is I was nervous the entire match because although San Lorenzo attacked and played better (River played worse than in the Cup match where they defeated us), we couldn´t get it in. Navarro missed a goal just when we started, and Barovero cleared them all. And as the second half went on, I began to feel afraid they would score a nasty one. Finally, the penalty and Buffa, on the second try, sent it in. I´m going to tell you something about magical thinking: when Buffa was going to kick the penalty, I felt he was going to miss. Then I went to the living room where the photo of my godfather is – a father to me, and whose photo I kissed innumerable times when we defeated River in the Copa Libertadores - and I kissed it. I went back to the TV and Buffa missed. Immediately, in an incomprehensible way, the referee - on the suggestion of the line judge - orders that the penalty be kicked again. Everybody goes crazy but me, because I know what my godfather was capable of when he was alive, and now that he doesn´t have to be restrained by physical form, he can do anything, like forcing a penalty to be kicked again. Goal by Buffa and the sensation that CASLA deserved to win not because of this referee error but because of the two teams; it´s the only one that tried to play soccer. Now Thursday is coming with River again, and I hope that the Millonarios [tr. note: River] come out to play, attacking sometimes and giving us room to attack them.

Cuervo, I was writing to you when I received your email. What you are writing to me is more or less what I was going to tell you about my feelings on the match. I wore the t-shirt and my friend Léo also supported us, wearing the old azulgrana [tr. note: red and blue] lace-up shirt from the CASLA Centennial. He fell asleep during the second half, it was past 3 in the morning, but I held on. I liked the way we played, as I often do since Pizzi came. As on many other occasions, we were by far the superior team, but we suffered to strike a goal. Our goal approach and shots on target are still problematic for us. And, again, they almost pissed on our parade with a set-piece goal at the end of the match. A miracle that they didn´t do it. If I were for River, I'd be furious with the referee´s decision regarding the penalty kicked by Buffarini. Barovero was great at saves throughout the match, and he deserves credit for how he saved Buffa´s. But since I´m a Cuervo, I see it like you: justice was served; we deserved to win. We have lost so many times against inferior teams that hardly play, even last week against this same River of Ramón's. Now, there are no more excuses. As you say, we have to turn things around on Thursday in the Gallinero to continue in the Copa Sudamericana.

This past weekend I watched an awesome match on TV, Valencia-Barcelona. The two goalkeepers, the Brazilian Diego Alves for Valencia and the Spaniard Victor Valdés for Barça, played very well. Valdés blocked like Barovero, with saves of every kind. If he continues like this, he´ll be the top goalkeeper of the Spanish team in the World Cup, replacing Iker Casillas. Now it seems to me that what Ancelotti is doing with the captain of Real Madrid is very clumsy. He should alternate him and Diego López. López is playing well, but not like Valdés. If the coach doesn´t see Casillas as the number one goalkeeper, he should alternate him with López to pick up the pace. If he doesn´t play, it´s going to be difficult to be up to par if he has to save, for example, in the Champions tournament or in the Copa del Rey. It makes me sad what has happened to Casillas since Mourinho did everything to destroy his morale and that of so many Madrid players. We haven´t heard the last of the Lamentable One´s scorched earth policy, as has been the case in all the clubs this narcissist has managed. Like what happens with Ramón and Mini Mou Lombardi, the thing always ends rather badly. Eventually, I think it will be the same with Chelsea.

Did you see the nice cover of the new issue of Gráfico? 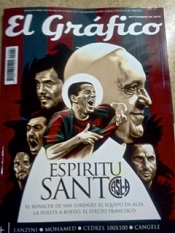 Cuervo, what you are saying in that paragraph where you say that if you were for River you would have been angry with the sanction to kick the penalty again is exactly what I´ve been thinking. Sometimes, being a supporter makes one become the most stupid being in the world. To the point of almost denying the presence of the adversary. "You don´t exist" is one of the disqualifications used against the opponent. And now, with the visiting supporters banned because of the violence, we see how "you don´t exist" becomes a painful reality, taking emotion and excitement away from the game. Living the other´s epic story - that is to say, being a supporter, but being inclusive, admiring the exploits of the opponent - is becoming increasingly difficult. And never mind about putting yourself in the other´s shoes as you do. To tell the truth, if I had been for River, I´d be annoyed with the refereeing because until the penalty moment, although San Lorenzo was making them dance to their tune, they hadn´t scored. And to win, to reassert your supremacy, you have to score goals. I´m convinced that I like CASLA much more playing well and then winning than seeing them winning without how they played mattering at all. If there´s one thing I admire in Pizzi´s team, it´s that they are always searching. I´m convinced that they´ll come out to play the same way next Thursday in the Gallinero. Let´s hope the two of them attack each other; that way we´ll see an epic match, like that unforgettable one in the Libertadores [tournament].

The Gallinero.
© TBD.
Today I saw the El Gráfico cover at the news agent and I thought I´d buy it to send it to your Cuervo Culé [tr. note: Barça-Cuervo supporter] friend. Shall I send it?

Thank you very much for your offer, brother. I´m coming soon to Buenos Aires to present the book about Max Schmidt (Hijos de la selva) from our publishing house, Perceval Press, so if you want to save it, I´ll get the magazine when I get there.

I just found out that a new documentary called "Salinger" is about to be screened. I thought of you because I know you like that author very much. I do too. I understand that the movie is good, that some people who saw it at a film festival ended up crying. Let´s see if we can find it soon to enjoy it together. This is a trailer from the movie:

This is the poster:

© TBD.
I think the match tonight against River is going to be very tough; I don´t know why. I also believe that our team has the courage and level-headedness to face it. I just finished reading Pizzi´s words previous to the match. Very sensible and calm. He knows that it's possible, that it can be done. Go San Lorenzo!

Bergessio, on May 8.
© TBD.
Hey, I don´t know if you have seen this article in the Revista del Ciclón.