Cuervo, I watched the match with my brother. Did you watch it? River played like a B team, applying pressure with a fighting spirit, but nothing else. That worried me, that we couldn´t beat a mediocre team. As I had already written to you, the goalkeeper didn´t win any points with me; he gave away that ball that ended as the Chickens' [tr. note: River´s nickname] goal. The player rotation is going against us; I think Pizzi has to build a single team and alter it according to the vicissitudes (injuries, poor performances). There has to be a first team line-up, that feel themselves to be the first team. It was a pity that Romagnoli didn´t play. Anyway, bad night, very cold.

Another thing, the Mondongo group wrote to me; they had read the last instalment of Sobrevueloscuervos about Kevin Power, and they were very moved. I, for my part, continue reading the poet Creeley, who is a fucking genius!

Take a look at this from Frank Zappa, another genius:

Fabián, I´m glad to know that artists like the Mondongo guys read us from time to time. That was dreadful! During these past years, they enjoyed a creative and rather close relationship with Kevin, and I´m sure they miss him very much.

With respect to the Copa Sudamericana match against River, I think we had a little bad luck there. As has happened many times to our team during the past tournament, San Lorenzo lost a bitch of a match despite having shown a quite superior collective game to that of their rival. These things happen, and I don´t think we need to agonize much over it, although it´s very infuriating to lose such a match on our field. I have faith in a comeback in the Gallinero [tr. note: Henhouse, River´s stadium,] and I dream of a feat at the same level as that of 2008 in the Copa Libertadores, with those legendary goals by Bergessio. Pizzi´s rotations don´t bother me. At the start of the current tournament, like in the last leg of the previous one, the coach´s strategy of mixing veteran and new players in different combinations has produced very good results. Tonight we play against Quilmes and this match we have to win, do or die. And then, next week, we have to see each other twice with Ramón Díaz' guys for the national tournament and the second leg of the Copa Sudamericana. It´s the time for brave men, but our guys deserve having us put our trust in them.

The debate, on the TV program "Crossfire", between Frank Zappa and the very repressed journalist from the Washington Times, John Lofton, is historically very interesting. Besides defending authors against censorship and theological repression, Zappa speaks clearly about what was generally going on in American society during Ronald Reagan´s presidency. It was 1986, and Zappa was warning that society was being dragged towards a sort of fascism based on (and justified by) Christian fundamentalism. During the first six years of his term of office, Reagan and his ultra-rightwing colleagues in the White House and Congress - among them people as bellicose and anti-democratic as Dick Cheney, Donald Rumsfeld, Paul Wolfowitz and John Negroponte (who later also made war for George W. Bush) helped to speed up the long and painful march towards a conservatism that is severely puritanical, militaristic, internationally unsupportive (except with governments ready to crush their people in order to favour American corporations) and obsessed with giving free rein to a capitalism wildly independent of any regulation and social responsibility.

Nor have the Democrats Clinton and Obama, as much as some commentators would like to paint these presidents as "Kennedyesque," tried in any serious way to stop the promotion of an extremely conservative politics in an increasingly radical socio-economic, neo-liberal environment in the United States. By the way, Kennedy was no saint either. He also proved to be rather militaristic and imperialist, but that´s another story. A lot is being said about how anti-democratic and imperialist the George W. Bush government was, and very rightly so, but Clinton and, especially, Obama have been just as criminal in their international policy, just as neo-liberal in their economic policy. As a citizen of the USA, it often depresses me how little the presidents of the United States and their federal governments listen to their citizens, how little their actions reflect the innumerable speeches praising the nobility and the will of the people. I guess the historical path of every empire is more or less the same: a period of global domination, fed by economic oppression and abolition of the people´s civil rights, followed by an inelegant economic and military collapse. In any case, the marginalization of the individual as a consequence of the swing to the extreme right, initiated under Reagan, is something that Frank Zappa predicted. 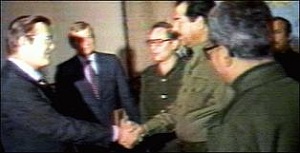 © Unknown.
(Rumsfeld in 1983, greeting his friend, dictator Saddam Hussein, who Ronald Reagan´s government helped by updating and increasing his military arsenal, even facilitating for him the acquisition of chemical weapons forbidden by international agreements. Reagan supported Hussein unconditionally, in spite of being aware of the many massacres and tortures perpetrated by the "Stalin" of Baghdad. It seems incredible, but Rumsfeld was a member of the Advisory Committee on Arms Control under Reagan. He was Secretary of Defense under Gerald Ford and George W. Bush. Nobody did more to promote the questionable invasions of Afghanistan and Iraq in 2001 than Rumsfeld. What a defense!)

Well, I went through a rather wide and messy garden. Another time, if you like, we can talk more about international politics, but now I'm going back to CASLA. I just finished reading a very well-written article by Frederic Porta about the legendary San Lorenzo of the 40's. Here goes:

Hello Viggo, it was very cold yesterday and, as Manuel Moretti sings, I thought it was going to be a perfect day. Because I was at home, relaxed, things clean and tidy, the smell of coffee, the taste of tangerines in the fruit bowl, and Anita asleep early. So I could watch the match with Quilmes calmly and enjoy it. But suddenly everything turned into a Stephen King nightmare and I ended up like the Incredible Hulk, transformed into a madman, naked, wearing only a pair of small short pants (because all the Incredible Hulk's clothes were torn except for the small short pants), shouting at the TV, breaking a glass of water and waking Anita up, with complaints from Guadalupe. I had dinner in silence with a hellish depression, and this morning, while I was waking up, in those moments when the "I" begins to function, I recalled the plays, the goals we missed, the corner kicks that are almost like penalties for us... and I had to breathe deeply to rid myself of all that. I know the championship is just beginning. I know that, as you say, we have the second leg with River right here, and I also know - I saw things clearly today - that in spite of the mistakes in the game, San Lorenzo never gives up attacking on any field. So we have to wait. I hope the rotation strengthens a more solid team. I think we play against River for the championship on Sunday and there we´ll begin to find out whether this team, in addition to having good players, has the mettle to impose their game. I hope they do.

We had to win "do or die," I said. But no. I understand the rage you felt. It was the same with me. Here in Europe it was almost four in the morning when the match ended. I slept a bit during half-time and, since it was very hot here, I took off the Cetto t-shirt that I was wearing. I forgot to put it back on when the second half started. After the cannon shot from González, the result of the fucking rebound of a corner from Quilmes, I was deeply depressed. Looking at the floor, I saw the white "2" on the azulgrana t-shirt I had taken off. "I´m a jerk; that´s why we lost! Why did you throw the t-shirt on the floor like a miserable prick!" I said to myself aloud. "What?," asked my girlfriend, raising her head from the pillow, more than half-sleep. "Nothing. Sorry I woke you up, dear." Although, out of superstition, I have many rituals and habits, especially regarding CASLA, I know, of course, that we didn´t lose because I took the t-shirt off while I was watching the match on my laptop, thousands of kilometres away from Buenos Aires. I know it has nothing to do with it, but on the other hand, I also know you have to give everything everywhere as a supporter. That´s the way it is, you never know... 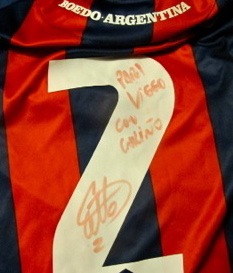 © Viggo Mortensen.
That thing about corner kicks is an infernal bad streak. I don´t understand it. On the positive side, regarding San Lorenzo, what stood out for me was the total commitment of our team. As usual our players fought with courage and a good collective effort until the end. Like Jake LaMotta always did in the ring. As you said, they never stop attacking, believing in the possibility of throwing the rival off balance and scoring goals from them. I sincerely believe that this attitude, and the fact that Pizzi keeps on working relaxed and focused, will bring the good results we dream about. I hope that Buffarini doesn´t leave immediately for Mexico, as much as his possible transfer is being talked about. He's been a key player for this Pizzi team. But we also have many good players, and we´ll be able to keep on going quickly up the sides and middle of the field. Now, in the next two matches against River Plate, we have to show that we are still candidates for everything. The first one will be played on our field, where it has been hard for us to win. It obviously is a decisive match. I´m going to watch it with all the t-shirts, flags and all the lucky charms in place, at whatever time.

Quilmes guys celebrating the big goal.
© Unknown.
The Moretti song, "Un día perfecto" [A Perfect Day], that you mention is very nice. I remember having seen him singing another short one called "Autobuses" [Buses] on the TV program "678" while we were shooting Ana Piterbarg´s flick in Tigre during the winter of 2011. This one is also very good. Here's the link:

That´s right, my friend. From what I see, there we were the two of us - separated by many miles - suffering the same things with CASLA. Did you notice that River also defeated us with a bloody set piece play?

The championship has already done away with two coaches: Brindisi and Zubeldía. The funny thing with Zubeldía was that they sacked him in a press conference with the president, Cogorno, and when they asked him what kind of coach they were looking for now he said someone with ... Zubeldía´s profile! It seemed like a joke. I think that the press conference must be on YouTube. Brindisi´s farewell, also in a press conference, was very emotional; if you can, listen to what he said because it was remarkable

Brindisi, Zubeldía.
© Unknown.
Maybe the news of the week, for me, is that it´s being said that from 2015 on, they´ll begin publishing five books Salinger left unpublished. Did you know that these books are revised in red and blue? In blue, it´s to be published; in red, it isn´t. His daughter, Margaret, told about this in a very good book called El guardián de los sueños in Spanish [tr. note: English title, Dream Catcher]. I can´t wait to read those stories!