We watched the game against Racing in El Condor with members of the Peña de Viedma y Patagones. Good people, a match that made you want to shoot yourself. Saja had a heroic performance in the Academia goal, almost erasing from our memory the miraculous initial goal - half Messi, half Maradona - of the kid, Villalba, who replaced Stracqualursi for this game. When Jara wasted what seemed an absolutely certain goal to give us a 2-1 advantage, the nightmare began. Chino's saves were extraordinary. How we miss him! In my opinion, we saw there how the erratic legacy of Ramón Diaz with regard to CASLA continues to hurt us, despite the championship that he brought us in 2007. Saja said this when he left San Lorenzo:

"If I come across Ramón Diaz, I won't say hello. He hurt me; he's responsible for me leaving San Lorenzo." 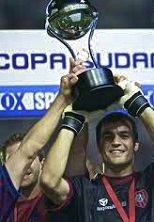 © Unknown.
But our defeat by Racing is not el Pelado´s fault, nor did (for once) Pezzota´s refereeing make it complicated for us. We annihilated ourselves on our own. I don´t think I´m too superstitious, but I remember that during the match previous to ours, San Martin against Boca Juniors, I shouted out a goal in the bar we went to before going to see the local peña. A gentleman who is usually in that bar is a Bostero [tr.note: fans of Boca], and he looked like he wanted to kill or die at the same time. I shouted without thinking, and I tried to cover up immediately by praising the great save by Boca´s goalkeeper. But the die was cast, and karma came back around. Now, the next day, I´m in the same bar to write to you because there´s no Internet here in Rio Negro, where we are shooting Lisandro Alonso´s film. I came in and the gentleman was sitting by himself, watching the match between Manchester City and Chelsea. "Hey, yesterday they gave us a real beating too," I said to him. After a perfect pause, during which he noticed the emblem in my hoodie, he smiled at me like an 8 year old kid would. "So they did...," he shot back at me.

Dear Viggo: I just arrived at work after that lethal week in La Lobería. Racing's goals are still in my head. I think today Alvarado said some convincing things in the paper: "San Lorenzo played for 15 minutes and Racing for 90, so they deserved to win." He's right. We had drive and one Messi-type goal that seemed to promise a party but was simply a coitus interruptus. Now Arsenal and Godoy Cruz are coming, two difficult teams. Alvarado also said that we have to go back to being formidable in our stadium. Do you see what I was telling you last Sunday, that "I have more faith in CASLA away than at home"? In order to stop thinking about the hellish game, I got to thinking about what we did in La Lobería with Lisandro, you and the great crew and I remembered what you said about shoots - that when you shoot a film, sometimes the shoot creates a family, but that in Lisandro's case, it's the reverse, because his work crew that follows him since La Libertad [Freedom] already is a family that, in this case, does a shoot, makes a movie. And I also kept thinking about the beautiful sunset on the route that we followed when you took us to Viedma so that we could take the bus and about the Dylan music that we listened to. 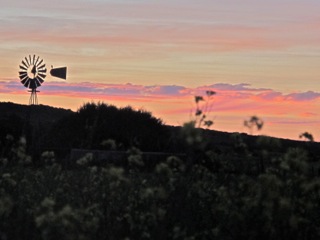 © Viggo Mortensen.
At that moment I thought, but didn´t tell you, that Dylan is a musician of the road, his music is for the road. To be on the road is a life choice. Few clothes, bare feet, lots of dreams... I want what I learned in those days from you and Lisandro to remain in me. 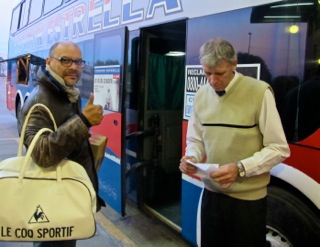 I´m glad to know that you arrived in Buenos Aires well. I had a great time with you and Lisandro, getting together before and after each day´s shoot to revise and prepare texts and sequences. We have been adapting ourselves to this lovely journey of filming that we began, a little more than a week ago, here in Río Negro. The truth is that so many things have happened that it seems like a month. We´ve continued the same way since you got on the "Condor Estrella" in Viedma. We continue sailing over the obstacles, making the most of the unexpected moments the best we can. Each day is a bit more intense than the one before, while we cross the inner and outer desert of this story that already has a life of its own. The only thing we can do is hold onto its tail and endure the gallops and setbacks that may bring us. The crew is very good. They believe, as you and I do, in the personal way of telling films that Lisandro has. Please, give a kiss to Guadalupe and Anita. How good that Guadalupe could also be here for a few days! The photos she took for the film are beautiful. I´m sending you one of her riding "Lorenzo" (the owner is a Cuervo) at the end of the first day of shooting. 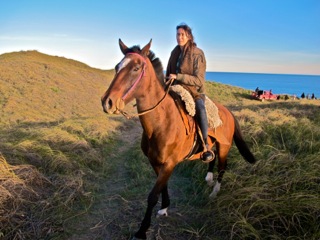 © Viggo Mortensen.
As you know, we are far from Internet connections and cellular phones. I am writing in a Viedma teashop (the "Comahue")[tr.note: Teashop's name is the name of this area in the north of Patagonia in Argentina], where I went for gas, to buy maps, water and other things to take in the car to that remote part of the Pampas where the shoot will continue. The next part that we're filming is some 750 kilometers from La Lobería. We have had difficult moments and luminous ones since you left, but everything's going well. Lisandro has an angel watching over him, it seems to me. Yesterday we did the great trench scene. Almost fifty men and boys from Viedma and Patagonia came and everyone did very good work. Looking at their faces, I couldn't stop imagining the lives of their ancestors, because many of them looked like photographs of Mapuches, Tehuelches and other original people of this part of Argentina. And others reminded me of the faces of European immigrants, soldiers, gauchos of days gone by. I had no doubt that I was in the 19th century, during the period of Julio Argentino Roca's brutal campaign - all day. One of those who were working today was pleased to tell me that he was a Racing supporter. I congratulated him on his team's recent victory, later buying him and his companions a little cold beer to finish our day of hard labor. Now my character moves far away from these men - from all men - continuing at a trot and sometimes at a gallop his strange pilgrimage to find his daughter and himself. 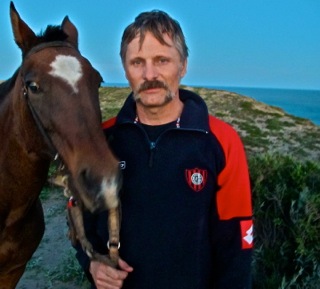 © Viggo Mortensen.
Last night I went up to the "call center," that hill by the sea where sometimes your cell works, and they told me on the phone that recently the president of Spain, Mariano Rajoy, went to Rome to give Pope Francis a t-shirt of the Spanish national team, and that the super Cuervo Pope thanked him, saying, "If I had known you were bringing me this t-shirt, I would have given you a San Lorenzo one." I guess it´s old news, but here, far from what´s recently been published, I laughed a lot thinking about the expression on Rajoy´s face. "San Lorenzo," he will have wondered, "San Lorenzo del Escorial?" [tr. note: a community near Madrid] It's incredible that a pope is talking seriously about soccer t-shirts during an official visit to the Vatican by a head of state - but that he's thinking about exchanging a San Lorenzo t-shirt for one from "La Roja" instead of one from the Argentine national team seems like a wild idea that could only have come from the delirious dream of a Ciclon supporter. 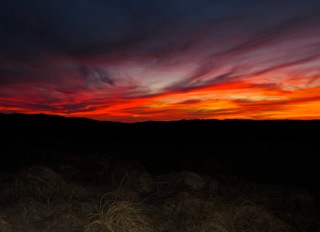 © Viggo Mortensen.
Another great thing I saw was they included Villalbas´s goal against Racing among the best in history on the website of the newspaper Marca, back in Spain . The Cuervo one is there with the one from Maradona against the English, and Messi´s against Getafe, among other great goals. You can vote for the best one. This is the link:

© Unknown.
Now, about to leave for the Pampas, I think of what we achieved with the filming in the beautiful province of Río Negro. It´s increasingly clear to me that our existential "Western" has to do with the endurance and determination of the man to understand how time works, what it is that life wants from him. We are constructing a race with death, not against death. I think (correct me if you don´t agree) that the "Gunnar Dinesen" character is becoming aware during this story that there are other realities, other times, that being in a hurry doesn´t take you to any better place. It´s a story of transformation and acceptance. This reminds me of a quote by the great artist Chavela Vargas, who died last year at the age of 93. That tiger of a woman, who went on singing until her last days in this world, once said:

"I will meet face to face with death. I´m not afraid of her; I respect her. Madame, here I am, whenever you like... I´ve done everything fully aware and I don´t regret anything. Not the good, or the bad things, not the happy moments, or the sorrow.... My soul is filled with peace and tranquillity, at last."

I think that´s the way you have to live and play soccer. I´m sending you a couple of songs by Chavela, "El último trago" (The Last Drink) and "Llorona" (Cryer).

© Unknown.
I stopped to eat and use the laptop at a service station in the Pampas. There are some 60 or 70 year old men watching the Vélez-Newell's game on the TV. Impressive how Tata Martino has them playing. His teams seems like Cappa's Huracán of 2009. Speaking of good coaches, I read a comment about Pep Guardiola in the Página 12 newspaper of 4/17, written by Jorge Valdano (another [guy] who began with Newell's like Tata). He also praises Marcelo Bielsa in it. What he says is accurate, as I see it. Have a look if you haven't seen it:

PS: The website sobrevueloscuervos.com where this chat and the ones to follow will be posted is already underway. Our old chats are also filed there. We will continue to add things - quotes, Cuervo news, etc. - "but the base is there." [tr. note: quote from Bambino Veira]