David Cronenberg Gets The Kinks Out 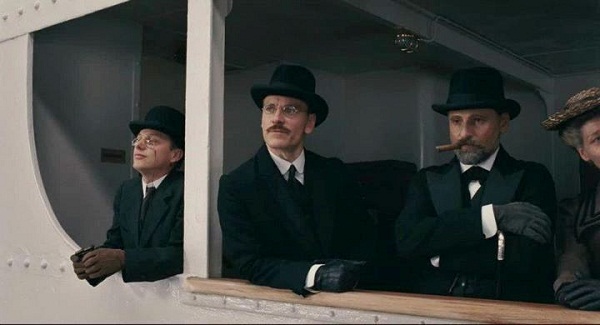 © Hanway/Lago.
A Dangerous Method promises the body, but delivers the mind.

In this sense, it may be the most perverse David Cronenberg film yet.

It has the surface elements of Cronenbergian kink: beautiful people giving free rein to their darkest sexual impulses, both in the name of science and the libido.

Advance word - or maybe it was just a Freudian slip? - suggested some sort of a ménage à trois between Viggo Mortensen, Michael Fassbender and Keira Knightley, in their respective roles of psychiatrists Sigmund Freud and Carl Jung and clinical subject Sabina Spielrein.

Set in Vienna and Geneva just before the start of World War I, the story is a good deal less sexy but also more layered than this, which may disappoint voyeurs - although there are a few moments of slap and tickle.

Think of it more as satisfying mental intercourse, with Mortensen's Freud and Fassbender's Jung teasing themselves, and us, to keep up.

As Jung says in an exchange with Freud associate Otto Gross (Vincent Cassel): "Pleasure is never simple, as you very well know."

They instead busy themselves with the dynamics of competing mental health treatments at the dawn of psychoanalysis - a term so new, mentor Freud corrects his student Jung about its correct pronunciation. Words mean more than actions in this film.

The cigar-stroking Freud has bold theories, all based on sex, but he is conservative as to how to apply them.

Jung, an admirer and avid student of Freud's, seeks to put his mentor's radical ideas into practice at a Zurich clinic. He also wishes to expand upon them, by employing elements of the spiritual that Freud detests.

Jung gets his chance with the arrival of Spielrein, an agitated Russian woman who has to be physically restrained to prevent her from hurting herself and others. She equates physical pain with arousal, the result of childhood beatings.

It is no exaggeration to say that Knightley throws herself into the role, to the point where it almost overwhelms the movie.

Almost, but not quite. Spielrein (and also Knightley) is shrewder and more seductive than she seems. She proves capable of testing the strongest of minds. In Jung's case, she's serious temptation for a married man whose wife (Sarah Gadon) has been providing babies but not excitement.

As Spielrein becomes less of a patient and more of an equal to Jung, her boldness and braininess becomes of interest to Freud, too, further fraying the bonds of friendship between the older and younger man.

Mortensen's buttoned-down and highly verbal Freud is something to behold - and also to listen to. The actor has been the quiet man of volcanic physical intensity in two previous Cronenberg films, A History of Violence and Eastern Promises. Here his tongue is more lethal than his fists, as when he tears into Jung for practising "second-rate mysticism and self-aggrandizing shamanism."

Freud is also a good deal funnier than history records, sometimes requiring no more than an rolled eye to get a laugh - as when he witnesses how Jung, more the bumpkin than he cares to admit, greedily piles food onto his plate as if it's his last meal.

Fassbender's self-loathing Jung makes an intriguing counterpart to his other libidinous character currently on view, the obsessed Brendan of Steve McQueen's Shame. What might Jung have made of Brendan's self-abusing sex drive?

A Dangerous Method inspires thoughts such as these.

Cronenberg has reached the stage of his career where he doesn't feel it necessary to pander to expectations. Instead he seeks to engage us, and he succeeds.
Top of this page
Last edited: 31 October 2012 20:22:52