Viggo-Works > Articles > Interviews > 2012 > "Nostalgia strikes me as being dangerous"

"Nostalgia strikes me as being dangerous"

By Dieter Oßwald - translated by Athelin

Source: Frankfurter Neue Presse
Beat-poet Old Bull Lee (Viggo Mortensen) lives with wife and children in New Orleans, where he has created his very own drug-paradise. Whoever visits him, not only receives a freshly-rolled joint, but also a free lecture about the expansion of consciousness. 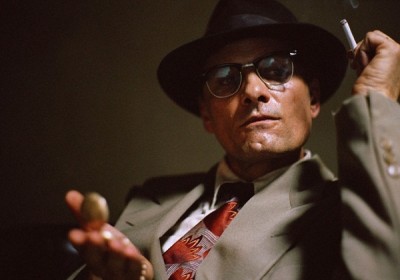 Image Gregory Smith.
© MK2 Productions.
As the valiant fighter Aragorn in the Lord of the Rings, Viggo Mortensen (53) achieved the big quantum leap. Later, he was hired by director David Cronenberg for as many as three times: for A History of Violence, the mafia-movie Eastern Promises and as Sigmund Freud in A Dangerous Method. Now he appears on screen as the supporting character of Old Bull Lee in the road-movie On the Road. Behind this focal figure of Jack Kerouac's novel hides the beat-poet William S. Burroughs, a drug addict and polymath. Dieter Oßwald talked to Viggo Mortensen.

Mr. Mortensen, how relaxed do you perceive the wild times, in which the movie is set? Was everything better then, in the late 1940s?

Viggo Mortensen: Nostalgia always strikes me as being dangerous. Times were interesting then, but not better. All the more I like the fact that the movie does not avoid to show the dark sides of those times. Taking drugs and breaking the law may be tempting to gain nice experiences. Yet, the bar to acting irresponsible towards others and oneself lies very low in those moments.

What are your memories about Jack Kerouac's cult novel of the same title?

Viggo: I read this novel for the first time as a teenager, and since then three times as a whole and often in parts. I've read everything that was published by Kerouac, Burroughs and Ginsberg. In preparation of the movie, I listened to all available voice recordings of Burroughs ? among them were also talks between him and Cronenberg concerning the filming of Naked Lunch.

Do you see similarities between Sigmund Freud, whom you played for Cronenberg last time, and Burroughs?

Viggo: Prior to those movies, I'd never have thought it would be possible to draw parallels. But there really are similarities between Freud and Burroughs. Both men feel indebted to some kind of formality in their very own way. They know all the rules by heart ? and are by this all the better able to break them. The more I am concerned with them and the more intensive I could hear their voices, the more I additionally discovered their humour, which is a very dry one.

The filming of On the Road was planned for many years, but failed again and again. Was the time ripe now?

Viggo: An important advantage of the late filming is the fact that one now has enough distance to see the story in its historical framework. This would not have been possible at all during the 1970s, 1980s or 1990s. Moreover, a brand new up-to-dateness arises. Like then, we now live in very conservative times politically, when a consciousness of renewal surely cannot be amiss. After all, many people are not at all satisfied with the state of things.

For many people, this novel was deemed unfit for filming. Did you ever have similar qualms?

Viggo: I never thought this novel unfit for filming, yet it was obviously no easy task. But after reading the script, my concerns were easily resolved. The movie takes over the novel's best elements, stays true to the characters and besides focuses on the women, which for me is a true improvement compared to the original.

Where did you see the greatest obstacle for filming?

Viggo: The big obstacle for any film is rhythm, and this holds true especially in this case, because the story is told in episodes. So, the lack of a usual form of dramaturgy in this mode of story-telling gives a special meaning to music, as the soundtrack connects everything.

What was the atmosphere on set like? The South American Salles is regarded as an ice-cold analyst, compared to Cronenberg.

Viggo: Cronenberg's image is not quite consistent with reality. Prior to my first movie, I too believed him to be like a strict professor. In reality, he's not only very relaxed and calm, but likes to joke around, too. Salles loves rehearsals and improvisation, which does not exist at all with Cronenberg. But both are very open to suggestions and like to be surprised by their actors.

What is the best thing about your job?

Viggo: First, there's the constant learning process. Then there are the many possibilities this job offers. You do a lot of travelling, be it in your imagination or in reality to the sets. Moreover, you meet lots of people. A number of them may seem rather strange, but some are by all means fascinating.

Was there an initial moment that brought you to acting?

Viggo: There never was this one special moment, rather the trigger was my curiosity. Besides, at age 21 I decided relatively late to become an actor. Originally, I only wanted to pursue this for a couple of years and do something completely different when I became 30.

Do you have a career plan?

Viggo: No, but perhaps I should write down such a plan once in a while. I believe that good work brings along good offers. Of course you always need a stroke of luck. No matter how good an actor may be, without good stories he has nothing to offer.

How would you define good stories?

Viggo: Good stories must be inventive, calling for thought, and for me personally, they should offer me the chance to learn something new.