By Manuel Piñón - translated by Zoe 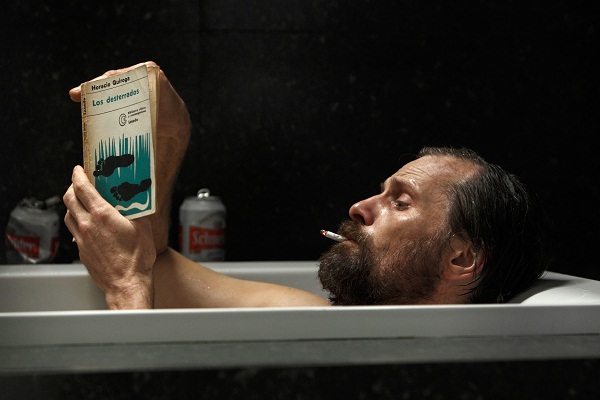 © Haddock Films.
An actor is as good as the decisions he makes. If you don't know what I'm talking about, think about Nicolas Cage, whose agent is either not very convincing or gives some terrible advice. In the unwritten book about roles that one should not accept, at least one chapter should be dedicated to the films in which the same man acts the part of a pair of twins. It can come out very well - there is, without looking further, Adaptation, - but for every memorable case, there is a sack full of Parent Trap and Charley's Aunt and such.

I'm sure that Viggo Mortensen was conscious of the risk that he would run in accepting being split into the good brother and the bad brother - the absurdity of trick mirrors! And besides, in Argentinian Spanish? It's not hard to understand what he saw in the script of beginner Ana Piterbarg in putting himself in that very mess. Written with intelligence and amazing precision, Todos tenemos un plan appropriates the essence of film noir to explore the darkest corners of a character who at first seems foreign to the genre.

Agustín, a man in crisis, stuck in an existence that he doesn't remember having chosen, sees an emergency exit in supplanting his brother Pedro, despite the fact that he is a criminal running the last meters of a blind alley. The life of the other as a metaphor for what we covet out of pure ignorance and a setting rich in interpretations like the Tigre Delta, a fork [in the river] that leads to the same place, on which to stage the conflict. Feeling his way to discovering the truth about a brother with whom he only shared the starting point, his own identity is being revealed. Same features, same characteristics, but inverted in the reflection of that dismal, brown river that drags along and hides the crimes of its navigators with sinister complicity.

Mortensen faces a deadly triple flip: to play a character, his brother and the version of Pedro that Agustín adopts in order not to set off the alarms of those who knew the real one. In that transition, please, someone point out which emotion is not out of range. Well, the actor nails them all. Even to the point of turning an impossible, farfetched situation into something as human and real as the news of incidents in any newspaper. In fact, the really surprising thing is that Todos tenemos un plan is not based on one of them.

Verdict: A surprising film noir with an Argentinian accent but none of its cliches.