A Few Minutes On The Couch With Viggo Mortensen

Source: St Louis Post-Dispatch
The king of Middle-earth is now the lord of the subconscious. 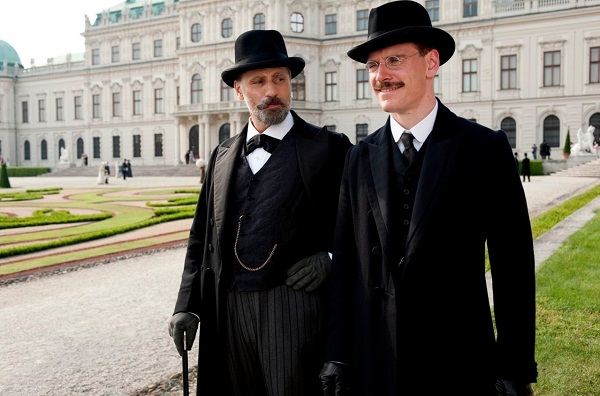 © Hanway/Lago.
Viggo Mortensen, immortalized as the monarch in the Lord of the Rings trilogy, stars as psychoanalyst Sigmund Freud in the new movie A Dangerous Method, opening locally Jan. 20. After A History of Violence and Eastern Promises (for which Mortensen was nominated for an Academy Award as best actor), this is his third collaboration with edgy Canadian director David Cronenberg.

Cronenberg has a gift for gore but, in the new film, the violence is almost entirely psychological, as Freud and his protege Carl Jung (Michael Fassbender) are driven apart by ideological differences and a masochistic patient (Keira Knightley).

Born in New York in 1958 to a Danish father and an American mother, Mortensen spent most of his childhood in Argentina, where his father managed poultry farms. After his parents divorced, he completed high school and college in New York, then trekked through Europe for several years before pursuing an acting career in Los Angeles. In 1987, with roles in Witness and The Purple Rose of Cairo [sic] under his belt, he married punk-rock singer Exene Cervenka. Although the couple divorced in 1998, they've remained friends and share joint custody of their son Henry.

We recently spoke with Mortensen by phone from Madrid, where he has been performing in Ariel Dorfman's play Purgatorio.

You're doing a play in Spanish right now. In how many languages are you proficient enough to perform for paying customers?

Once you learn a second language, it's easier to add more. As a child, I learned English, which has Germanic roots, and Spanish which has Latin roots, so I was well-prepared. I could probably do a role in Danish or French or Italian. If I had to.

Are you someone who does a lot of research for your roles?

I love doing the research. Between researching a role, playing a role and watching it afterward on the screen, the thing I enjoy most is the preparatory period. Sometimes the shoot isn't as organized or creative or relaxed as it should be, and often the finished result isn't what you expected. But with a director like David Cronenberg, he appreciates the research, and he's willing to collaborate with you to bring it to life. Then his shoots are usually a lot of fun and full of jokes, and the finished product is usually pretty good. It's a win-win-win situation.

Did you know much about Sigmund Freud before you accepted this project?

I thought I did, but I didn't know how extensive his interests were in areas outside of psychoanalysis. I didn't know he had such an appetite for life, that he was gregarious and sociable and had a wicked sense of humor.

A recent article in the New York Review of Books suggested that Freud's use of cocaine was much more pervasive than previously acknowledged and that it coincided with the free thinking that gave birth to psychoanalysis.

He did have a great interest in the drug and felt that it was useful, but he had a close friend who was ruined by it, so Freud left it behind. His personality -- that he was gregarious and disciplined and a tireless worker -- was not due to cocaine.

It's irresponsible to examine an isolated part of his life out of context. Freud and Jung were quite open with each other during the birth of psychoanalysis. They readily spoke about their mistakes, the way they modified and even rejected some of their earlier ideas. It was science that was evolving, and they evolved with it, as professionals and as people.

Before the period when he used cocaine, Freud had a reputation as a prudish fellow, and some biographies say he was shocked by his patients' sexual revelations. But others say that the cocaine made him more sexually aware and insistent that his patients talk about it.

He had six children, so he was a sexual being. As much as anyone, he taught us that sex is a vital part of the human experience. He talked about the body as much as the mind. He wanted to talk about things that we all think about but are forbidden to talk about and hide in our subconscious. Especially women, who were forbidden to express themselves. Topics like sexual desire, body image, the effects of aging -- these were taboo. Freud was determined to talk about unmentionable things -- which made him revolutionary and threatening. When Jung suggested that they talk about sex in different terms, his answer was why? He's someone who always went toward the body, and Jung gradually went into a more ethereal, mystical area. Jung became as much of a spiritual figure as a scientist.

Jung believed in the collective soul of the human race and that coincidence was a sign of something. In the conflict between Jung and Freud, whom do you side with?

It's a misconception that Freud was single-minded. If you look at his books and the other objects he collected, Freud was very interested in archaeology, anthropology and mythology. But he wanted to be disciplined about those studies, especially at a time when some scientists were skeptical toward psychoanalysis itself. He was called a quack who was peddling a pseudo-science for the Jewish bourgeoisie, so he didn't want to spread himself too thin by following Jung into nebulous areas.

Jung wanted to cure people. Freud wanted to help them by making them aware of certain patterns in their thinking and behavior, but he didn't think anyone was magically cured. And I think I side with Freud on this one.