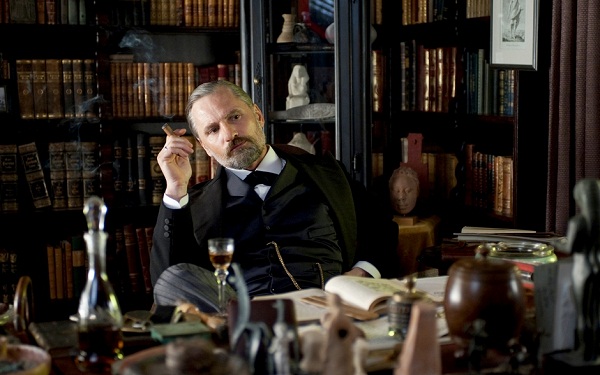 © Hanway/Lago.
Viggo Mortensen talks about what attracted him to the role of Sigmund Freud in A Dangerous Method as well as why he enjoys working with director David Cronenberg. He also discusses the possibility of a sequel to Eastern Promises and why he had to get to grips with cigar smoking for this role.

You read up quite extensively on Freud as part of your preparation to play him. But how much did you know about him beforehand and what surprised you about him over the course of your research?

Viggo Mortensen: I knew quite a bit and also about [Carl] Jung. I'd heard the name Sabina Spielrein but didn't really know much about her. I certainly wasn't aware of her ideas, which Freud and Jung borrowed from. I didn't know much about that so I think, as it will be for many people, it was a revelation to discover that this woman existed and at that time, much more so than now, it was unusual for a woman to have made the advances she did and to have gained the respect of male colleagues in her profession. That was very interesting.

You also responded to the fact this was a more wordy script that you're traditionally associated with?

Viggo Mortensen: Right. It's true that even with David, I haven't... I've done some theatre but I've not usually been given roles that had that much dialogue. It's mostly non-verbal expression that I've been given to do in movies [smiles], so it was new and different for me. I got to exercise different muscles, I suppose, as an actor and I enjoyed that.

How did you enjoy working with Michael Fassbender? I gather he has quite an unusual warm-up technique before each scene?

Viggo Mortensen: [Laughs] He's a cut-up. He likes to have a good time. That doesn't mean that he doesn't take his job seriously... on the contrary he really does. But I think his keeping things light on the set is a way of being relaxed. It doesn't matter what kind of role you're playing, the main thing to do first of all is to be relaxed. One assumes that you're showing up prepared and you know your lines and everything, but to just be loose and relaxed allows you to be more receptive. After all, the basis of any good acting, and probably directing too, is the ability to relax and pay attention and take in what's happening around you from take to take. I think that's Michael's way of doing that. I'm not that different. Maybe I do my research differently, I suppose, but I like to relax. That's why I like working with David Cronenberg because he's someone who is a bit of a joker on the set. He has a good sense of humour. He keeps things light. He demands in a quiet way, and without ever shouting, excellence and your very best and you want to give it to him because he so inspires confidence. So, you want to do well for him as much or more so than you would for another director. But he is able to have a very light atmosphere on set. I've found this on all three movies I've done with him - A History of Violence, Eastern Promises and A Dangerous Method. No matter how serious, and perhaps even more so when it's really serious or intense emotionally, things are very light. There's a lot of joking. In a way, it allows you to feel like it's just play and that you have all the time in the world, which is of course not true. And it should be play. But there is underneath it... we know that we're on a schedule, we know that if you don't get it on film, that particular intensity or whatever the scene demands, you're not going to have it to edit. So, he definitely needs it and we know that we need to deliver but somehow it's playful and you have fun. If you're having fun doing your job, it doesn't matter what line of work you're in, you're probably going to do a better job and have better memories of having worked on that job.

Does David continually surprise you in the way that he works with you and finds new ways of getting a performance from you?

Viggo Mortensen: Um, I guess I'm not surprised because I've been around him a lot and seen how he works. But in how he quietly keeps evolving... he's someone who... there's a lot of directors who have been around as long as he has and had a respectable track record in making interesting movies and, in some cases, almost as diverse as his record is. But there's very few who don't calcify to some degree. Without naming names, some of the world's renowned directors, who have been around for decades like he has, seem to become trapped by their persona or their image or their previous stories. I don't think David really looks back at all. He takes from project to project new insights that he gains about how to work with actors and the technical aspects of filmmaking. He's always looking to try new things. But he doesn't look back and I think that allows him to keep exploring. I think this movie shows that he can do something completely different as far as a look, a period piece... a piece that's heavy with dialogue. It's not an easy job. If you take this script and give it to most directors, it would be hard for them to make something that wasn't dull. I don't think this movie is at all dull and that speaks to his self-confidence and his continued exploration. He doesn't fall back on tricks or previous moves or ways of making movies. So, that's what I enjoy. Sometimes he surprises me in how simple he can make the job seem. Just the way the movie is shot and directed... there's a lightness to it, which was I think the right approach. Looks-wise - the sets, the clothing, the dialogue certainly - it's layered, it's very dense in some cases and it's very detailed, so to shoot in a kind of loose, traditional, old-fashioned and simple way was a good way to go. It allowed the story to breathe and the characters to be seen for what they were.

You mention his not looking back, is that what makes something like a sequel to Eastern Promises harder to persuade him to do? I gather you're very keen to do it?

Viggo Mortensen: No, it's not a question of persuading him to do it. I think he's intrigued by the idea. He's never made a sequel. He's done a remake of The Fly, obviously. But I think that he liked the atmosphere, the setting... there's something about that story that allows for a sequel. It sort of invites speculation about what happens to that character now in the same way that, say, The Godfather ends and you think, well there's Michael Corleone sitting in that chair and he's now in a position, a new position of power, so what does that mean? How far will it go? How will it affect him? Where does he go from there? But you could say that about any movie... or any good movie that leaves you wondering as even A History of Violence does. What happens now? With A Dangerous Method, also, even though we know the history of these people... we know that Jung died in the 60s, we know that Freud died at the end of the 30s, we know that Spielrein died in 1942, but there's something in the way it's left hanging that asks how are they going to behave now? The next day... how is Sabina going to deal with what happens in that last scene? And most importantly, the central character, how is Jung going to deal with that? There's something about David's movie-making that prompts you to talk about the movie, to say 'I don't know what's going to happen next.' In A History of Violence, what's going to happen to that family? So, it's not unusual for that to be the case but I guess for him Eastern Promises seemed to have something that interests him in taking it further.

How did being able to smoke those cigars help inform the character, though? I gather they were the ones that Freud would have smoked?

Viggo Mortensen: Yeah, they're basically the same Cuban cigars. They're good cigars. It took a little getting used to smoking that many. I had smoked a cigar before, and my grandfather smoked a lot of them, but it took a while to not get kind of dizzy smoking that many during the day. You don't think of it... you're doing take to take and you light a new one, light a new one, light a new one. But once I got used to it, it was a good prop. It helped me with the character. It helped me when imitating photographs and based on descriptions of Freud to recreate the way he probably spoke and certainly the way he held a cigar and smoked them.